Conventional wisdom in the financial industry regarding how to contend with robberies can be summed up in one word: compliance. Hand over the money and make sure nobody gets hurt. While well intended, the FBI has found this approach may actually be a contributing factor to the number of banks being robbed.

But last week, a teller in Seattle chased a would-be robber from the bank, wrestled him to the ground several blocks later and held him there until police came. To some, the teller’s actions were heroic, while others felt he exposed everyone to a ton of risk.

While police and the FBI discourage behavior like the teller’s admittedly instinctive response, the FBI says there is indeed a proactive way for bank employees to be heroes without jeopardizing anyone’s safety. They call it “Safecatch,” where bank employees are trained to spot suspicious behavior and safely take control of the situation before a robbery occurs.

“SafeCatch doesn’t put bank employees in danger, but it does empower them to make a potential robber think twice about going through with it, and if he does, it teaches employees to partner with law enforcement to safely assist in the capture,” says Special Agent Larry Carr, the FBI’s Seattle bank robbery coordinator who created the SafeCatch concept several years ago.

Employees trained in SafeCatch learn to spot “customers” who may be acting nervously or wearing hats or hooded sweatshirts-to shield their faces from security cameras. Before a robbery occurs, employees proactively engage the person.

“Good afternoon!” the employee might say. “I don’t think I’ve seen you in this branch before. If you’re here to open a new account, I can take your ID and help you at my desk.” 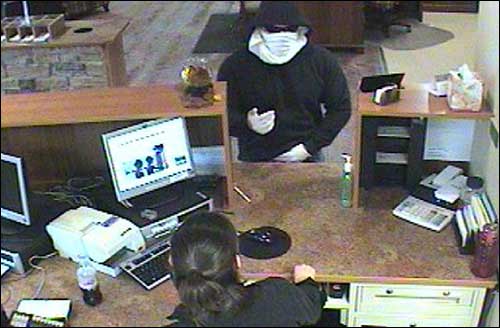 “SafeCatch doesn’t put bank employees in danger, but it does empower them to make a potential robber think twice about going through with it,” says Special Agent Larry Carr.

That action might be just enough to make the robber head for the door. If the person turns out to be a legitimate customer, Carr said, the only thing the employee has done is offer excellent customer service.

One key piece of the SafeCatch strategy is making sure branch employees — specifically tellers — can keep an eye on people. “Highly trained relationship staff at transaction pods can view members throughout their entry and exit and have a safe way to exit potentially dangerous situations and call 911,” says Paul Seibert, a principal with EHS Design and one of the financial industry’s foremost architects. Seibert helped the FBI’s Carr develop the SafeCatch program.

Since 2006, Carr has provided SafeCatch training to some 40 financial institutions in Washington state — that’s about 400 bank branches and 3,000 employees. Last year, Seattle saw a 51% decrease in the number of bank robberies from its decade average, which is even more impressive considering that in many parts of the country bank robberies are on the rise.

The majority of bank robbers are males acting alone without weapons-they know that using a weapon during a robbery can mean a lot more jail time. The robber typically poses as a customer waiting in line. It’s only when he gets to the teller’s window and makes a demand that he has committed a crime.

“It’s important to catch the guy after his first robbery and before he can strike again,” Carr said. “If we teach strategies that make it possible to safely achieve a police capture, you will see dramatic drop in an area’s bank robbery rate.”