Rationally, it doesn’t make sense… People aren’t using branches anymore. They don’t really need them to conduct basic transactions. Footfall is way down. Nearly everything can be done through digital channels. This sense of logic has lulled many in the banking industry into believing branches are dead.

But study after study has proven time and time again that this simply isn’t the case. Despite declining usage, the presence of branches is key to acquiring new customers. Convenience of branch locations is still far and away the number one reason customers cite for why they chose their bank.

In a recent study by CFI Group, the number one reason consumers cite for choosing their current banking provider: convenient branch location. 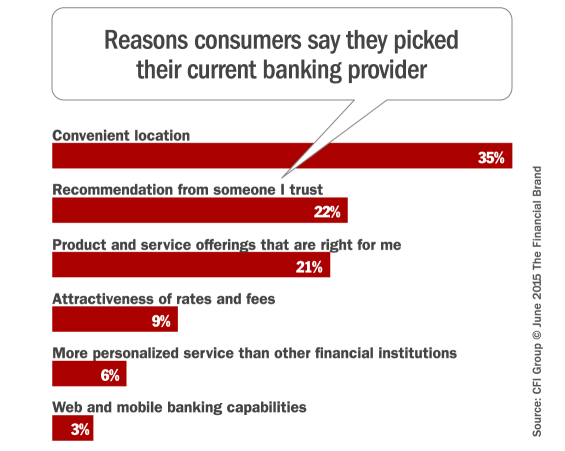 When asked how important it is to have a branch nearby, 64% said it was either important or very important. Only 10% of bank customers told us the branch location was of little or no importance. 68% of respondents said they live less than three miles from the nearest branch. This is true for both new and long-time customers.

“Banks must recognize the continuing importance of having a strong, well-run branch presence,” says Sheri Petras, CEO of CFI. “Consumers still choose their banks primarily based on the proximity of the branch locations.” 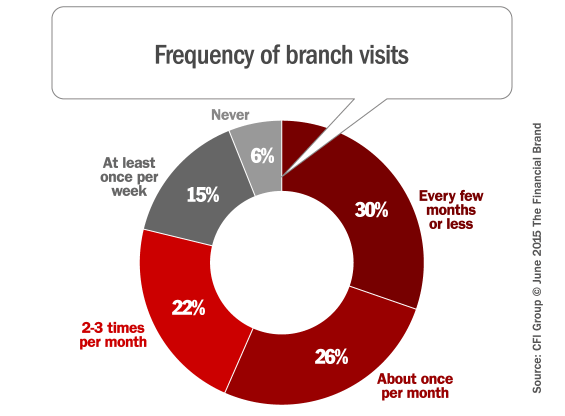 A third of bank customers surveyed said that they were already using their bank branches either somewhat less often or significantly less often than they were three years ago. Only 17% admitted to using the branches more often and 52% said their usage was about the same.

Only 37% say they are going into a branch more than once a month according to the CFI survey. Nearly a third (31%) say they are using the branch less often than just three years ago, compared to only 17% who use it more.

“Though customers may not visit the brick-and-mortar locations as much as they previously did due to the rise of web-based banking, the experience they have when they do visit is crucial to ensuring satisfaction and loyalty.”

When asked about the future, most customers (60 percent) did not expect their branch usage to increase, while 25 percent expected it to decrease. Only 15 percent of respondents reported that they expect to visit their bank branches more often in the future.

When asked to list banking activities that they perform remotely now as opposed to just three years ago, 70% of customers indicated at least one activity type. Checking account balances remotely was the most commonly listed activity, followed by paying bills and transferring money between accounts. 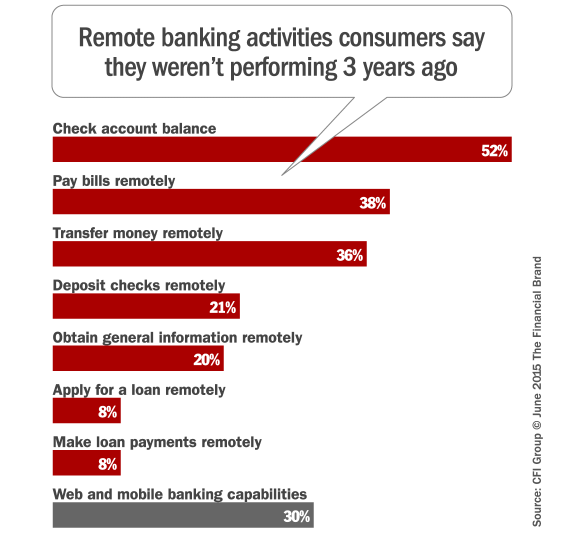 In CFI’s study, 86% of respondents ages 18-49 said they now do at least half of their banking remotely compared to 76% of those ages 50 and older.

Even though consumers are increasingly embracing online offerings, the fact that the bank offers these products and services does not yet appear to be a reason for people to begin doing business with a particular institution. According to CFI’s study, only 3% of respondents said they chose their bank based specifically on its website or mobile app.