How many consumers insist on opening new accounts in branches? And yet how many never step foot in a branch again after opening their account? The numbers will surprise you.

Novarica, in tandem with FindABetterBank.com, conducted a study that posed attitudinal questions about how important bank branches are when consumers consider a new banking relationship. The survey, fielded in late October and early November last year, received 2,754 completed responses.

The prevailing belief among financial marketers today is that younger consumers don’t care about bank branches while older consumers prefer branch banking. But Novarica cautions that sweeping generalizations like these can be misleading. Novarica found a surprising 58% of those under 30 would not consider opening an account at a bank without a branch nearby. And conversely, 64% of those 50 or older say they can imagine a time when they will do all their banking virtually. 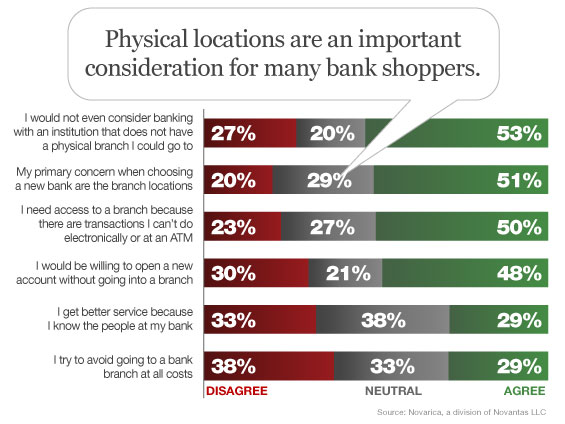 Across all age groups, 68% said that they wouldn’t currently choose a bank that doesn’t have convenient branches. Almost three quarters (71%) of customers state that branches and/or ATMs located near their home or work are important when selecting a bank.

50% feel they have transactions that can’t be completed online or at an ATM. Only 29% of respondents find going to a bank branch to be onerous.

Younger consumers represented the group most concerned about ATM locations. Overall, only 11% of respondents said ATM and branch locations are the most important factor.

The Branch Centric View is Dying

Most banks still consider branches to be the core channel within their distribution network, and use labels such as “alternate” or “direct” or “self-service” when referring to other channels. But Novarica says this view no longer holds water.

“Up until around 10 years ago, branches were the bank,” observes Novantas partner Kevin Travis (Novarica and FindABetterBank.com are divisions held by Novantas).

“Customers knew the bank because they saw the bank,” he explains. “They bought from the bank because it was there. Fast forward a decade. The branch, which for so long was everything — the brand, the sales channel, the service location — is losing its place at the center of the customer relationship.”

Now only one of six customers shops for bank products in branches — the rest do so online. For day-to-day banking, consumer preferences are trending strongly online and to mobile devices, and in-branch traffic in many markets is falling at rates of 7% or more annually.

While a wide range of transactions have migrated out of branches (e.g., balance inquiries, withdrawals, transfers), deposits remain very sticky in the brick-and-mortar world. A hefty 58% of consumers still opt to visit the teller to make their deposits.

And the branch is still the destination of choice for higher-value interactions — e.g. account opening, financial advice — with convenient locations continuing to impact consumers’ decisions regarding their financial providers.

The key take-away, Novarica’s says, is that consumers are still attached to their branches, even though they rely on them less and less, especially for everyday interactions that are more convenient for them to handle using self-service and digital channels.

Translation: You’re going to have a harder and harder time justifying a large, staff-intensive branch network.

Novarica asked survey participants about the two most important factors when considering opening a new checking account. No shock here: Fees were cited as the most important consideration by most consumers.

“Most people shopping for new checking accounts today are doing so because they’re dissatisfied with their current banking relationship,” says Rob Rubin, partner at Novarica and head of research for the Novarica Bank Shopper Insight series. “And high fees are the biggest reason why.” 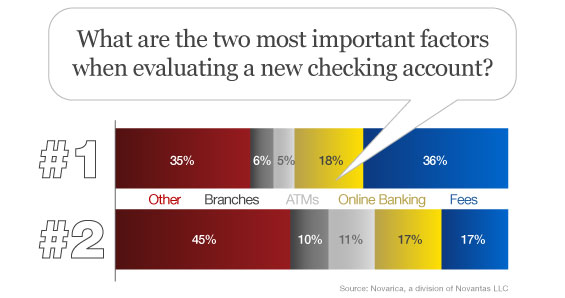 Respondents who identified fees as the most important factor when considering a checking account had 50% lower average lowest daily balance versus respondents who didn’t identify fees as a top 2 consideration.

As bank retail customers continue to seek additional services like mobile check deposit, the banking industry is preparing itself for yet another year of lower net interest margins. For many banks and some credit unions, 2013 will continue to struggle balancing customer expectations and competitive pressures against the bottom line.

Novantas research shows that affluent customers are detaching from traditional branches much faster than other customers. They are more likely to want to conduct day-to-day banking activities in virtual channels, and are the most willing to buy financial products over the phone, especially simple products like CDs and checking accounts.

“Providers with complex offers usually have at least 5% less penetration than competitors with simple offers in this segment, in terms of consideration and purchase behavior,” says Travis at Novantas.

According to Travis, the third most important factor for mass retail banking is direct channel access, in particular phone channel capability. Price is the fourth factor, most likely due these days to the broadly low-priced environment in which the market is stuck.

How Branches Should Be Designed and Networks Scaled

With so many customers roaming freely among channels (one of four either never or rarely uses the branch after opening accounts), important questions about marketing, sales and network capacity must be addressed through a new multi-channel perspective.

Travis with Novantas says banks desiging a multi-channel strategy in this new environment will need a much fuller view of customers, including deeper insights into channel-based profiles, transaction patterns and sales potential.

Some might argue that dwindling branch traffic undercuts the need for heavy advertising in dense markets. However, Novantas believes traditional marketing should become more important as branch traffic continues dropping; how else can financial institutions stay in front of consumers if not through advertising? Travis at Novantas says national bank brands built over decades with advertising may find they need fewer branches than other players to acquire new bank customers in new markets.

Ultimately, Travis feels that only about 75% of the pre-recession peak branch network will be needed going forward, both for reasons of changed growth and profit dynamics, and accelerating customer migration to alternative channels.