Subscribe Now Get The Financial Brand's FREE Email Newsletter
Vancity sorted over 60,000 pennies -- now out of circulation in Canada -- by color and tarnish level, then glued them to a massive billboard to create a mosaic masterpiece.
Subscribe Now!

In March 2012, Canada announced that it would be killing its penny as part of federal budget cuts, saving taxpayers an estimated $11 million per year. Effective February 4, 2013, the Royal Canadian Mint officially stopped making and distributing pennies. Canadians will now have to round all transactions to the nearest nickel.

President Obama has endorsed the idea of killing the penny. The White House estimates the move could save $100 million over a decade. It cost $58 million to mint U.S. pennies in 2012 alone. The U.S. currently has an estimated 150 billion pennies in circulation.
— International Business Times

Vancity, a community-centered credit union in Vancouver B.C., decided to capitalize on this landmark event, turning the death of the Canadian penny into a marketing opportunity.

In early February, Vancity kicked the first phase of its penny campaign into gear. At the time, every Canadian’s attention was focused on the subject of the now-dead penny. So they posed a question on their Facebook page: “What do you plan to do with all your pennies?”

The credit union offered two ideas: “We suggest you lead a penny drive to support a local cause in your community. Or drop your pennies off at our coin counters located at our newly redesigned branches — Shaughnessy Station Community Branch and South Burnaby Community Branch.”

What Vancity planned to do next with the pennies members plunked into their coin counters was simply brilliant.

A banner ad Vancity created for its Facebook page as part of its “put your pennies to work” promotion. 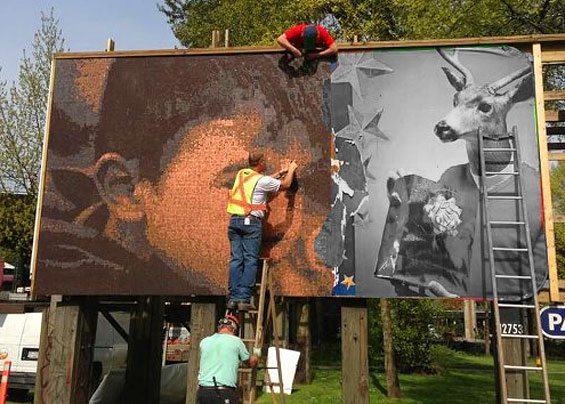 It took over 60,000 pennies to cover only half the billboard, but the raw materials only cost $600.

Vancity has built its brand around themes of civic responsibility and social ethics for many years now, so their decision to partner with Starworks was no accident. You see, Starworks was established by the Developmental Disabilities Association to provide employment opportunities to those with developmental disabilities. The company specializes in packaging, fulfillment, kitting and manual assembly, and employs over 50 people at its 5,000 square foot facility.

“The billboard is an innovative way of demonstrating Vancity’s “Make Good Money” philosophy,” said Richard Seres, VP/Marketing at Vancity. “We want to make good money for our members while creating positive change for local businesses and our community.”

“This is rooted in everything we do, right down to our choice of partners, like Starworks,” Seres further explained. “We really wanted to partner with somebody where we could actually take our marketing dollars and do some good instead of just creating a piece of advertising.”

“It’s also a resourceful way to put thousands of out-of-circulation pennies to use in a creative way that also generates local employment,” Seres added.

The project has created jobs for six people at Starworks.

What Vancity commissioned and what Starworks was able to create, is nothing short of a mosaic masterpiece.

“Are you ready for change that counts?” asks the slogan on the billboard. While the idiomatic expression “change that counts” has been used and abused by the financial industry many times before, Vancity’s fresh spin gives this tired pun a special, visual meaning. What’s more is that Vancity can actually back up its claim about offering a unique banking experience.

If you’re in the Vancouver area, you can see the billboard mosaic at 4th Ave and Granville St. facing west, at the main entrance to Granville Island (which is a pretty cool place worth visiting already).