Subscribe Now Get The Financial Brand's FREE Email Newsletter
Pioneer Bank wants to reinvent itself as a digital trailblazer while keeping one foot firmly planted in the brick and mortar channel.

When a bank with a name like “Pioneer” wants to rebrand themselves, it wouldn’t be surprising if they picked a new moniker — something that would distance them from Old West connotations of stagecoaches, cattle rustlers and dusty trails. But rather than change names, Pioneer Bank in Troy, New York ($780 million) had decided to redefine what their name evokes, opting instead to position the organization as contemporary trailblazers, with an array of cutting-edge services and high-tech delivery — pioneers in the new digital world.

“Over time, we want people to think of Pioneer Bank as forward-thinking, relevant, and visionary rather than as a nod to a historical figure,” says President/CEO Tom Amell.

So move over, Davy Crockett… It’s time to make room for a different style of banking, with branches where customers can ship packages, process photos, and shop for locally made gifts and other merchandise. Proceeds from Pioneer’s in-branch merchandise sales will go to local charities that support services for children within the bank’s communities. The new branch design also positions the bank facilities as “community centers,” with meeting rooms available for local groups.

“We want to give people a reason to put their car in park and come in through the front door,” Amell says.

With branch traffic across the industry declining by as much as 40%, change is imperative. But as a local community bank, Amell says Pioneer is not going to abandon the brick and mortar channel. Instead, the bank will revamp its 17 branches (an 18th opens in early 2015), putting its technology services front and center so that customers can choose self-service or person-to-person interactions.

Pioneer Bank is changing its customer service approach to a universal banker model, in which frontline employees are trained to provide any service a customer requests, from taking a deposit, to shipping a package, to opening a home equity line of credit.

“We’re here to serve our customers, and a lot of them still use our branches,” Amell explains. “If we’re going to maintain the expense of branch operations, we want to put more customers back in those branches and fully utilize the great branch staff we have.”

The Pioneer strategy assumes that financial services remains — at its core — about establishing relationships with customers, so the bank views its physical presence in the communities it serves is its foremost brand component. In a world where digital delivery often results in a less-personal experience, Pioneer Bank is placing an emphasis on face-to-face contact.

“As an industry, we’re kidding ourselves to think that we can really deepen relationships unless customers are in front of us,” Amell adds. “There’s no emotional bond with an ATM or online banking platform.” 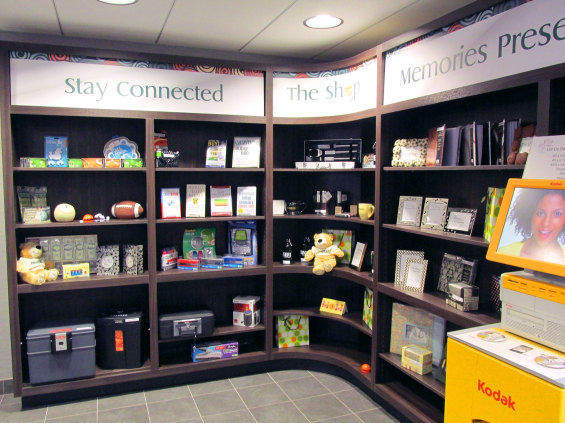 Called “The Shop,” this space inside a Pioneer Bank branch location offers books with financial tips, gifts, picture frames and office supplies, among other items. Notice the Kodak photo printer in the lower right corner.

For the messaging and image components of the rebranding, the bank wrestled with its heritage and longevity. Founded in 1889, Pioneer enjoys a strong, solid reputation in the market — a definite plus in a sector where trust is tantamount.

“But Pioneer also had a reputation for being dated, behind in products, and trailing with technology — even though we offer all the services customers say they want,” Amell says. “People saw us as an old-school savings bank. We needed to rebrand our image, to become more relevant to the changing demographics.”

Customer research by Burst Marketing, who was brought in to assist with the rebranding initiative, bore out those perceptual challenges.

“In phone interviews with both customers and noncustomers, we heard that Pioneer Bank was seen as an ‘older folks’ bank,” says Burst Marketing Account Manager Braden Russom. “One person told us, ‘That’s where my grandmother banked.’”

The new brand removes Pioneer’s old tag line “Where Banking is Personal,” which bank executives and their marketing team saw as flat and generic, and focuses on a new brand promise of “Banking for Dreamers, Doers, Movers, and Shakers” and a creative platform based on the statement, “There’s a New Pioneer in Each of Us.” An affinity for innovation is strong in the bank’s market area, which is trying to reposition itself as the next Silicon Valley, Russom says.

“But you don’t have to be a business incubator to be a pioneer,” he adds. “There are all sorts of pioneers — parents who are working hard to ensure their kids get the education they need, workers who power the tech industry. The idea of being a new pioneer is something the residents of the Capital Region understand and appreciate.” 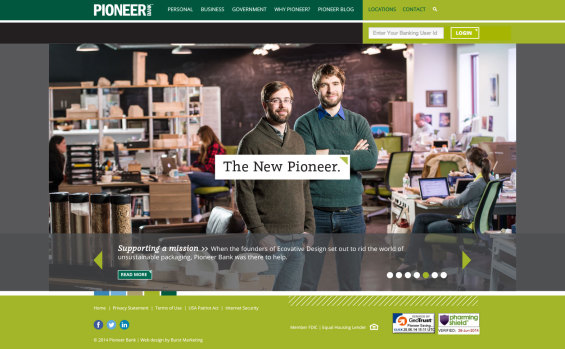 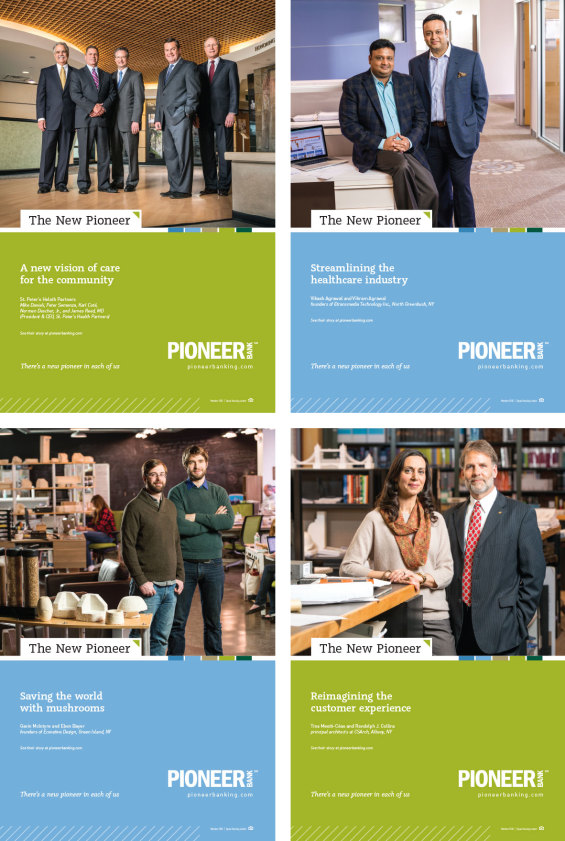 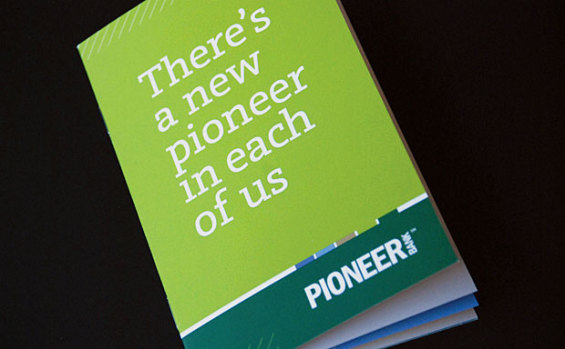 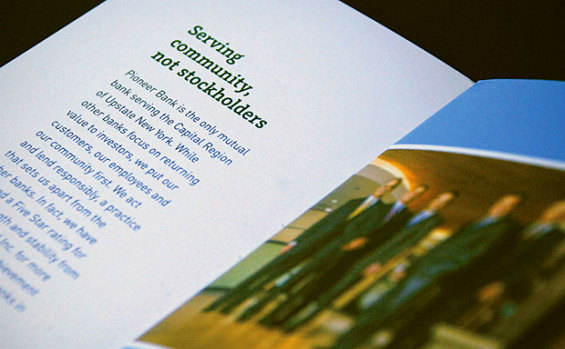 Internal Rebranding: Getting Staff on Board

Pioneer’s rebranding project isn’t just cosmetic. It also involves employee training encompassing Pioneer’s key messages and the ways in which the bank wants its staff to sell products and serve customers. Development of an extensive curriculum, called the “Pioneer Institute,” is under way to train staff on service delivery under the universal banker model, sales techniques, and how to live out the bank’s brand promise.

“Part of our core culture to support our brand promise is to deliver over-the-top customer service,” Amell says.

One of Amell’s top priorities when he joined Pioneer Bank in 2012 was to update its brand and positioning in its market, but he says he made a commitment to all staff that before any changes were implemented, he wanted to hear from them.

“We brought all the staff together. We’ve been going on tours to all the branches, spending two hours with each small group asking for their feedback on all the things they would like to see changed,” Amell says. “All of the ideas that we’ve incorporated into the rebranding came from those sessions. We’re proud of that, and we also know that the best way to get people to buy into something is to listen to and act on their ideas.”

The rollout of the rebranding began with a big employee event this spring, where employees received business cards and lanyards supporting the new messaging. A marketing campaign introducing the new pioneers theme ran from May through August, and Amell says efforts to incorporate the rebranding into the corporate culture and service delivery will be ongoing. Much of Pioneer’s $500,000 annual marketing budget (which excludes personnel costs) supports the rebranding.

To assess the impact of the rebranding, bank executives will be monitoring ROI and other financial metrics and plan to conduct employee and customer surveys, with an emphasis on the extent to which people see Pioneer Bank as current and relevant and how they rate its branch services and mobile and online access.

Amell’s parting advice to other banks consider rebranding is to take a wide view. “Resist the temptation to focus only on one area,” he says. “It really requires you to look at the facilities, the people who work in those facilities, the products you’re offering, and how you’re delivering them to customers.”