Subscribe Now Get The Financial Brand's FREE Email Newsletter
Gamification is the hot topic among financial marketers these days, and everyone wants to roll the dice. But what the heck is it, and what’s it take to win? 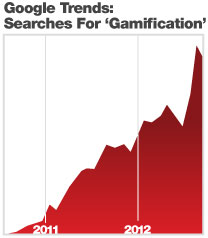 This graph from Google Trends shows that the term “gamification” didn’t really exist prior to late 2010.

The banking industry is regularly subjected to a flood of new themes and buzzy terms. Recently concepts like “big data” and “gamification” have been introduced into the financial marketing lexicon. Consultants jockey to take the lead as pioneers in these new fields while trade pubs look to capitalize on the sensation by pumping out story after story with buzz word after buzz word.

There has been a sharp increase in the number of times the term “gamification” gets dropped into banking industry conversations. But what the heck is it?

What Gamification Is… and Isn’t

Let’s start with what gamification isn’t. Just because you’re giving something away — cash, prizes, free trips, discounts and other free perks — doesn’t mean you’re using the principles of gamification. Financial institutions have been holding all sorts of contests, sweepstakes and promotions since the origins of the modern banking system. Remember free toasters? Does the industry need a new, fancy term to describe what it’s been doing for decades — account incentives? No. Simply because a bank or credit union campaign incorporates fun, game-style components — something with prizes and winners, or a public vote perhaps — does not automatically constitute gamification.

There is a keen distinction between promotional marketing and true gamification. Promotions typically dangle some sort of carrot to trigger a single activity, most commonly the adoption of a new product or service — e.g., “open a checking account and get a free iPod.” An iPod promotion could even be structured with game-like attributes, but the end goal is a singular consumer event: open an account.

Gamification, on the other hand, is a deliberate effort to make a product or service more “sticky” by using gaming psychology to ingrain desired behaviors.

Reality Check: Just because a game is involved does not mean it’s “gamification.”

The main principles of gamification are:

In other words, gamification is used to get consumers to do something more and to do it better. Points, badges, prizes, rewards, scorecards and leaderboards are used to encourage behaviors that are both positive for the consumer and profitable to the financial institution. It’s a product engagement strategy, not a promotional account acquisition strategy. It’s a win-win instead of a win-meh.

Key Insight: We’re all still kids at heart. Everyone loves getting a gold star and an attaboy.

The Case for Gamification in Banking

Why is gamification a good idea for the financial industry? Because banking sucks. For most consumers, it is an insufferably dull and boring chore. There’s nothing fun about it. Gamification can help make banking activities more exciting, more interesting and more enjoyable, which in turn increases consumer engagement and satisfaction.

“Gaming is productive,” says Jane McGongal, Director of Game Research at the Institute of the Future. “It produces positive emotion, strong social relationships, a sense of accomplishment, and for players who are a part of a game community, a chance to build a shared sense of purpose.”

And therein lies the key distinction between promotional gimmickry and true gamification: the psychological motives for playing a game differ from those that drive someone to enter a sweepstakes. 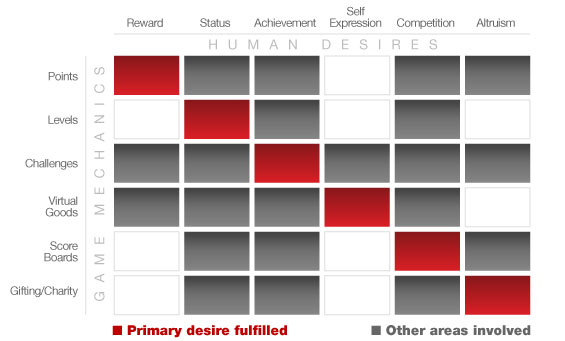 BBVA, a megabank originating in Spain, recently held a symposium on gamification in the banking industry. According to BBVA’s innovation team, there is demographic data to back up the case gamification. 53% of gamers are between the ages of 18-49, the sweet spot for banks and credit unions. 55% play games on mobile devices, the future face of financial institutions.

And just look at your own behavior, says BBVA. If you’re like most people, you’re addicted to a game, and probably even one you play at work. According to BBVA, 70% of senior level executives take breaks to play games on the job… every day.

Reality Check: Designing a game that’s fun and easy is to play is not a simple, straightforward task. Most games are flops. Just think about the video game industry where millions in development dollars can’t guarantee an ROI.

Not everyone in the banking industry is enthusiastic about gamification. “If that works to get some people to have good behavior, I’m all for that,” said Mark Schwanhausser, a senior analyst with Javelin Strategy & Research, in an interview with Reuters. “But it’s like mixing a game into something that is pretty darn serious, and I don’t think it’s going to be a widespread winner with banks.”

Nevertheless, financial marketers don’t seem that concerned. In a survey conducted by IND, 72% of bankers felt gamification could be appropriate within something as serious as their online banking system. Only 1% said no way. 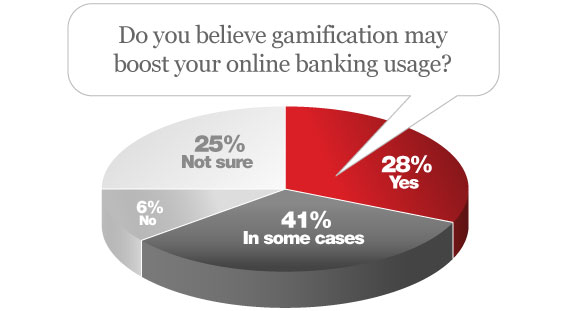 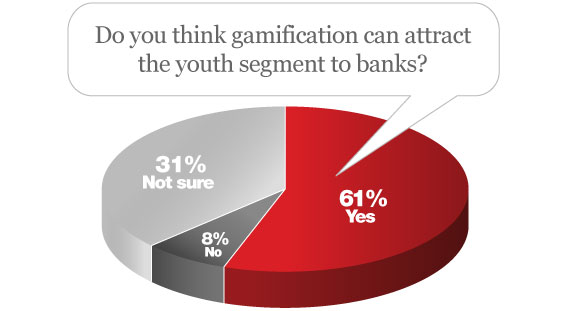 Examples of Gamification in Banking

GoalCard – a Facebook-linked debit card developed by Bobber Interactive that lets users play games with friends to win rewards points that they can trade for cash prizes. Some of the games are financial literacy quizzes, and players who do well enough on them can graduate to a level that allows them to play “Credits and Debits,” a game that is bejeweled with dollar signs and piggy banks, instead of emeralds and diamonds.

BankFusion – Misys is experimenting with incorporating a financial education game into the core DP system it sells to retail financial institutions. 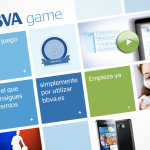 BBVA Game – a Facebook app allowing customers to earn points by using BBVA’s transactional banking site. Those points can be redeemed for products and services (direct-download music and streaming of online movies) or applied to sweepstakes. As of a month ago, BBVA Game had attracted over 37,000 players vying for 28 prizes (iPad, Samsung Galaxy, concert tickets, etc.).

CIMB YOUth – another Facebook-based app, this one for CIMB, a Malaysian bank. It involves a rather complex scheme of credits called “FUNds” issued for getting accounts and promoting the bank. You can read more about CIMB YOUth detail over at Visible Banking.

SaveUp.com – Players perform financial activities that win them credits that can be used to play for big money prizes. To earn those credits, players can pay a credit card bill, deposit money into their savings account, watch a sponsored video about personal finance, etc. 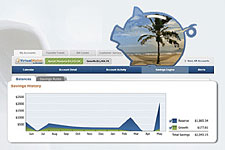 PNC Punch the Pig – A simple but no less significant example of gamification from PNC Bank. When someone is banking online, they just “punch” the piggy bank whenever it pops up and money — in an amount of the user’s choosing — will transfer from their Spend account to their Growth account. (For smartphone users, the “punch” is actually a “shake”.) Users decide how often the pig pops up, or for more spontaneous types, PNC will surprise users by throwing it out there at random moments.

Prized-Linked Savings – savings lotteries with raffle-style “Save to Win” promotions where people can win cash prizes in exchange for their deposits.

Foursquare Check-Ins – some financial institutions like DBS Bank in Asia and Dupaco Credit Union in the U.S. have experimented with GPS-based social media platforms such as Foursquare. Both rewarded people for making frequent branch visits by tracking check-ins.

56 Sage Street – a free, online, single-player money-management game from Barclays built around an cool, interactive virtual city. Players learn basic money management and life skills, working their way up levels by mastering life lessons and making wise financial decisions. The sprawling Flash-based game is intended to help the banking behemoth reach younger consumers. It’s one of the slickest games to ever come from the banking industry, and debuted well before “gamification” fell into vogue.