“Does the thought of your bank make you ill?
Are you gifted with poetic skill?
Then write down your scorn
In limerick form
For a chance to win prizes and thrills!”
— Call for entries on bigbanklimericks.org

Elevations Credit Union has launched a limerick-themed contest as part of a three-pronged product promotion. The credit union is giving away ten iPads and one grand prize — a trip to Limerick, Ireland worth $5,000 cash. To enter the contest, participants have to submit a bank-bashing limerick (bonus points for working in the credit union’s name), along with their name, email address and zip code.

At the end of the contest period later this summer, Elevations Credit Union’s internal auditor will conduct a random drawing to select 11 finalists from all eligible limericks (terms and conditions here). One grand prize winner will be selected from the 11 finalists and will be awarded a trip to Limerick, Ireland. The winner will have the option to substitute $5,000.00 in cash as an alternative prize. The ten other finalists will each receive an iPad 2.

The campaign goals include net growth of 1,100 new members and over 1,200 checking accounts. The target audience includes members ages 21-45 and non-members ages 18-45. Among the campaign’s components: 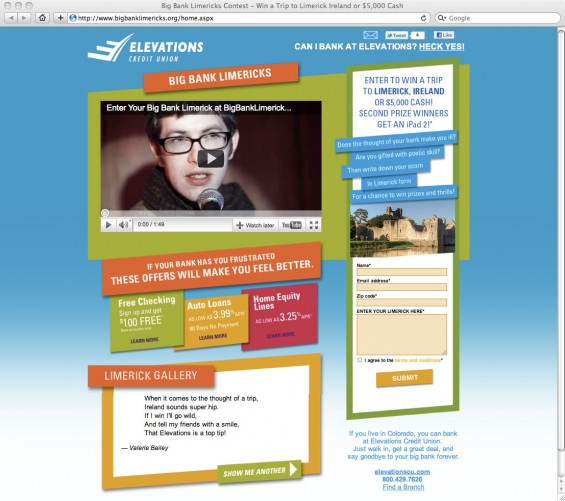 Limerick Submissions Good for a Laugh

At the credit union’s promotional microsite, bigbanklimericks.org, you can read through a number of limerick submissions, some of which are pretty funny.

The big banks charge enough fees
To make anyone go weak in the knees.
Our money is at Elevations,
The best credit union in the nation!
Now, send us to Ireland, please!
— Lynda Edwards

Big banks and big fees really stink,
they pushed me right over the brink.
So I packed up my cash,
said good by to their trash
and now Elevations is my link!
— Wade Branstetter

The bank stole all my money,
Which some may think is quite funny,
Because when my account was wee,
They still charged me a fee,
And left me feeling quite crummy.
— Cody Wiersema

There once was a family in Boulder,
Whose car was not only small it was older,
They bought a new auto with class,
A hybrid that was easy on the gas,
With an Elevations loan that was easy to shoulder.
— Michael Eubank

When I was a kid I loved banks,
For they gave lollipops as a thanks.
But now as a grown man,
I do all that I can,
To avoid them like shark tanks.
— Tom Whittaker

Big bank business bankrupting the nation,
Makes me was to scream “I need a vacation!”,
But when housing bubbles pop,
And big bonuses don’t stop,
I can always count on banking at Elevations.
— Colin Carr

I feel compelled to write down my cheer,
Because I’m saving a ton over here.
A poet, I’m not.
But savings, I’ve got.
So now I’ll pretend to be Shakespeare.
— Matthew Morrison

The campaign incorporates three product offers, one for checking accounts, one for auto loans and one for home equity lines.

Members will receive $100 if they open a checking account with direct deposit, get an Elevations debit card and sign up for eStatements. The offer applies to Free-, eStyle and Dividend Checking accounts.

The auto loan offer has rates starting at 3.99% on terms up to 60 months, a 90-day no-payment option, and a $150 Visa gift card if the car is purchased through Automotive Avenues, the credit union’s “trusted dealership” partner.

The home equity offer is pretty straightforward. Qualified members can get a 3.25% rate when tied to a checking account with direct deposit.

To kick the campaign off with staff, the credit union did a mini-roadshow that explained the promo, its key products and incentives. Employees were also challenged with a bank-bashing limerick contest of their own. 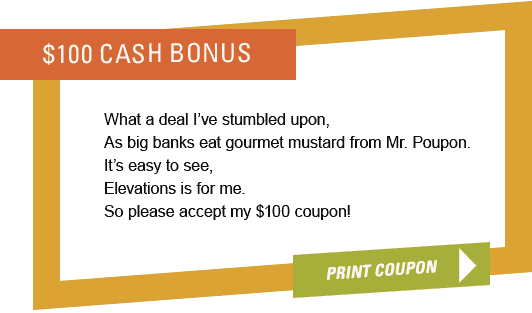 LIMERICK CHECKING ACCOUNT COUPON FOR $100
This creative coupon needs to be sent it in with the member’s account forms,
whether they open their checking account online or through the mail. 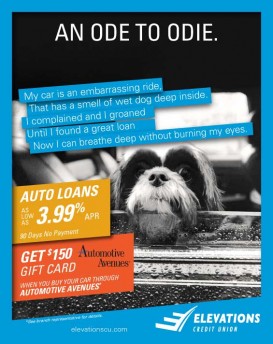 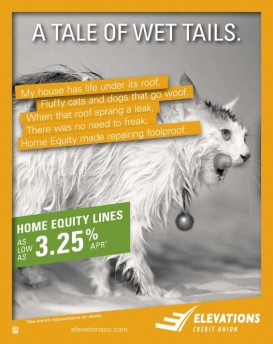 Weber Marketing Group, the agency behind the “Limerick” campaign, believes taking such a bold approach to marketing will result in the most successful campaign Elevations has ever run.

“We were drawn to the idea of an anti-bank rant cloaked as a protest poem,” Josh Streufert, Creative Director/Weber Marketing Group. “Limericks are fun and bawdy, silly but clever at the same time.”

“2011 presents a limited opportunity for credit unions to acquire disenfranchised bank customers,” the agency said. “Negative perceptions about big banks and high fees will grow for a period of time during 2011. However, it’s expected that customer acceptance and apathy over fees will increase as end-of-free-checking becomes the norm.”

Elevations Credit Union has nearly $1 billion in assets, 85,000 members and nine branches in the Colorado area where it is based.