Eastern Bank has unveiled one of its largest marketing campaigns in the company’s 195-year history with a new tagline, “Here, you’re first.SM,” which reinforces the bank’s commitment to putting the needs of its customers and community first.

The campaign focuses on five pillars of Eastern Bank’s brand:

Eastern Bank also built a microsite at Hereyourefirst.com showcasing some of the new advertising and providing links to the bank’s Facebook, Twitter and YouTube accounts. The site also features direct links to contacting customer service representatives and locating retail banking and insurance offices. 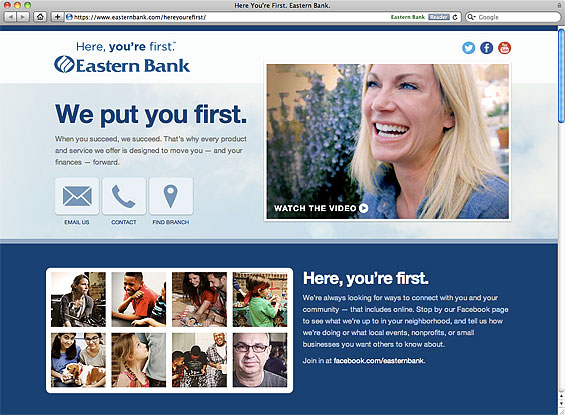 “Eastern Bank has always prided itself on providing excellent customer service – it’s what sets us apart from every other bank in Massachusetts,” said Richard E. Holbrook, chairman and CEO of Eastern Bank. “The tagline ‘Here, you’re first,’ is a natural extension of what we have been doing for years – putting the customer first.”