Subscribe Now Get The Financial Brand's FREE Email Newsletter
Let’s face it: online banking hasn’t fundamentally changed since it first rolled out over a decade ago. It’s an online version of a checking register and little else. But times are changing. Financial institutions everywhere are transforming their once dry and dull online banking systems into robust, feature-rich visual user experiences.
Subscribe Now!

It’s what has become loosely defined as “personal financial management,” or PFM — the visual representation of financial information intended to aid consumers with account management, budgeting, saving and other banking decisions.

A survey conducted this fall by Aite Group found that 75% of the 500 credit union executives polled said that online PFM tools for would be a must-have by the end of this year. 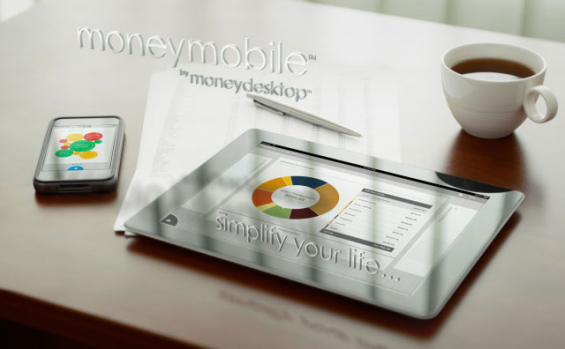 Shown here is a promotional image for the mobile version of MoneyDesktop, a visual PFM solution that was widely heralded at last year’s Finovate conference.

Last year, Celent reported that only 4% of online banking customers at the top 50 banks are active PFM users. And in a September 2012 survey from Aite found that only 27% use PFM from any host, whether that be from their own institution or a third-party site like Mint.com.

Ron Shevlin, a Senior Analyst with Aite, has criticized the approach financial institutions have taken to PFM. He says the industry’s lack of clarity about what PFM is and what it should do has created a muddled value proposition for consumers, who have expressed tepid interest.

Aite’s study revealed that only 13% want their bank or credit union to help them with financial advice tools. 58% of consumers have no plans to adopt it, and the remaining 46% don’t care.

“I believe we have a PFM delusion problem in the financial services industry,” Shevlin said in an interview with American Banker.

Banking futurist Brett King agrees. He says visualizations and basic budgeting tools are only one small step forward, and that financial institutions still have a long way to go. Many new, future improvements await.

“It’s going to take more than a few fancy pie charts, a drag and drop goal function, and seeing account usage on a timeline to pimp out internet banking,” King says candidly. “While a pie chart is potentially an effective tool to show me some of that, and might even be central in some scenarios, there is a lot of other relevant information that might be prioritized.”

Take a look at two recent examples — both rather typical — of how financial institutions are making online banking a more visual, intuitive, information-rich experience, with one from NAB in Australia and the other from BNZ in New Zealand. Keep in mind, this is just the beginning — the front edge of a trend that will wash over the online banking experience in the next decade. There’s still a lot to come…

Each time online banking customers log-in, they will see a widget with information about their accounts, providing a breakdown of where their money is coming from and where it is going. Customers now able to plan ahead by viewing their projected savings while comparing their income and expenses by category.

NAB customers can use Money Tracker to analyze income and expenses by category, set up budget targets and track them easily, and establish savings goals and check their progress. Money Tracker can also suggest budget targets for customers based on previous spending and forecast their financial situation, allowing users to enter “what if” scenarios.

Income and expenses – Shows you a breakdown of where your money is coming from, like salary or investments, and has gone, like on groceries and electricity.

Budget targets – Lets you see how you’re tracking on your monthly targets for each of your income and expenses categories.

Savings goals – Shows you any goals you have set up—like saving for a holiday, buying a new couch, or a house deposit – and it shows you how you’re progressing towards each goal.

Savings forecast – Shows you where your finances are heading based on your budget targets and savings goals.You can add scenarios like taking out a home loan or getting a pay rise to see how your forecast changes.

Account balance – Gives you a view of the balance in all of your accounts for the week, month or year. You can also use the drop down box to view summaries of your individual accounts.

NAB has an exhaustive overview and a 9-part tutorial on its website.

“It’s a budgeting tool for people who don’t have time to budget,” explains Sam Plowman, NAB Executive General Manager Direct Banking. “It does a lot of hard work for customers by automatically categorizing purchases and learning from any changes made for future transactions.”

Money Tracker is now available for free to all of NAB’s 2.1 million internet banking customers, over half of which are currently online and mobile banking users.

NAB rival ANZ has offered a similar service, MoneyManger, since at least 2010.

You Money from BNZ is an app-based visual account management, allowing users to set savings goals and establish budget amounts for bills, and track their progress accordingly.

Customers can create an unlimited number of accounts that can be opened (or closed) instantly with the click of a button within the You Money system. One of the coolest features You Money offers is the ability to personalize each account with a custom photo. Once a user has created their accounts, they can drag-and-drop funds between iOS-style icons.

BNZ says You Money was developed with help from Gen-Y focus groups. Customers were asked to draw pictures of how they related to their money, and they all drew pretty much the same thing: the concept of pots of money — or compartments — each labeled with a specific, individual purpose, and links between them.

You Money costs $5 a month, although the fee is waived for just about anyone in the target 18-29 age group.

BNZ says it will ultimately be rolled out to small- and medium-sized business customers as well.