“Capture The Tag” mobile phone promotion centered around Microsoft’s Tag technology. Participants armed with smart phones will embark on a treasure hunt to find and scan 30 MS tags at local businesses in the credit union’s area. Prizes include $15,000 in cash and five iPads. 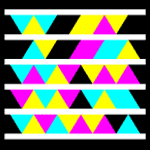 An example of a Microsoft "tag." Take a picture of this one with your phone and it will send you to The Financial Brand's website.

MS Tags are Microsoft’s version of QR codes. They are basically barcodes, except they use clusters of brightly colored triangles instead of square, black-and-white pixels or lines. Special software is required, but once you’ve downloaded it to your smart phone, you can take pictures of MS tags and you’ll instantly be directed to a message, website, video, or other type of digital data.

O Bee said it wanted to leverage the latest technology with a fun, creative contest that educated people about their personal finances while promoting local businesses. According to the credit union, the campaign was developed “to promote local commerce and to educate participants about finances, fraud and saving money in a fun and unique way.”

“The goal is to get the participants to visit local area businesses and capture the MS tag located inside/outside the business,” the credit union said.

The credit union has placed MS tags at a total of 20 businesses. Snapping a photo of the tag at each business will trigger a promotional video on the participant’s phone. At the end of each video, participants are given clues to the location of the next tag. Additionally, ten locations have bonus tags that play an educational video on personal finances.

Everyone who collects all 30 tags will be invited to a special party, where prizes will be awarded. First prize is $10,000.00. Second prize is $3,000.00. Third prize is $2,000.00. Participants who capture all ten educational videos are entered into a drawing for one of five Apple iPads.

Participants can sign up at CaptureTheTag.org, where they will find an instructional video and contest rules. The site also provides a link where participants can download the required scanning software to read the Microsoft MS Tags used in the game.

The promotion is mostly funded by participating businesses who pay a small entry fee in exchange for foot traffic and a video spot about their business.

Unlike many retail financial institutions these days, the credit union didn’t design the promotion with Gen-Y in mind. “We want to both engage and challenge Generation X and tech users to socially connect offline, as well as online,” the credit union said.

O Bee’s “Capture The Tag” is co-sponsored by 94.5 ROXY (radio station), The Olympian (newspaper), TwinStar Credit Union, The Washington State Department of Financial Institutions, Helix Group and NW Media Company. Clues and contest information will also be featured on the cosponsors’ websites, as well as “Capture The Tag” Facebook and Twitter pages.

“There is a whole lot going on here,” notes Lee Wojnar, Vice President of Marketing for O Bee Credit Union. “They’ll get an introduction to some area businesses where they can become customers, they’ll get some personal finance lessons, and in the end, they’ll get a chance to come together at a great party.”

“There are plenty of opportunities for fun and knowledge along the way,” Wojnar added.

The game officially starts on January 21 when the first clue will be released. Entrants have to be 18 years of age or older.

Based in Tumwater, Washington, O Bee Credit Union has three branches, around $140 million in assets and 15,000 members.

O Bee’s Wojnar is right, there is a lot going on. But is it too complex, with mobile phones, downloads, clues, tags, videos, 20 locations, financial education, a party and two tiers of prizes?

Getting co-sponsors to help shoulder the marketing burden is smart. It’s unlikely the credit union could stimulate significant interest in such a promotion on its own. Having media partners including a radio station and newspaper will help immensely.

It’s great to see a small, scrappy credit union testing the latest technology, but building a promotion entirely around something as new and unfamiliar as MS Tags is risky. MS Tags have not yet been widely adopted by the smart phone community.

On the upside however, things like QR codes and MS tags make it easy to focus promotions on a specific geographic area. Participants can only find tags if they live or work in the vicinity, which means you can get 100% local relevance and zero marketing “waste.” This makes QR codes and MS tags especially attractive to smaller financial institutions like community banks and credit unions who have limited geographic footprints.

O Bee may simply be looking to test the viability of MS Tags as a future marketing tool, but without any direct offer or clear product tie-in, it may be difficult to judge the success of this promotion and its impact on the bottom line.