Subscribe Now Get The Financial Brand's FREE Email Newsletter
When it comes to media buying, the era when decisions were simple and straightforward has come to an end. With digital, everything is much more complex.
Subscribe Now!

Two decades ago, there were only a handful of media options available to local and regional advertisers — the daily newspaper, the yellow pages, local television and radio stations, outdoor and maybe some local magazines. Today, the options have exploded with a plethora of new media channels, banner ads, search, in-app ads, pre-roll video, etc. It’s pretty obvious how much media consumption patterns have changed.

Financial marketers are living in a very tumultuous and confusing time, as they try to navigate the maze of advertising and content delivery options they can tap to reach their various audience segments. Each channel and platform has a different model, and micro-targeting means you have a myriad of choices to make before making your decisions.

Many common assumptions about media buying today don’t necessarily stand up to scrutiny. For example, it’s logical to assume that, as new media channels grow, they would, in turn, cannibalize established media. Research conducted by the Sells Agency shows, however, that new devices and channels are creating an overall increase in the amount of time spent consuming media broadly. In other words, the pie isn’t just being divided into more pieces, the pie itself is growing. 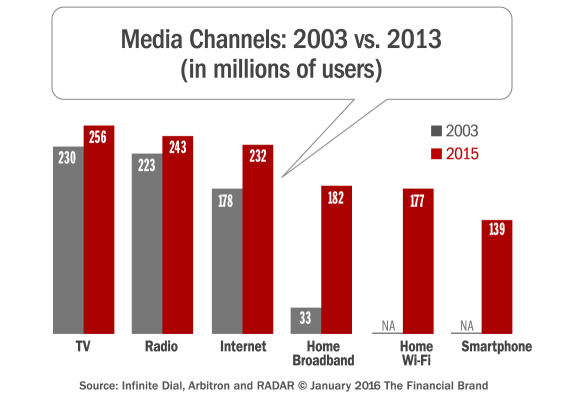 This is why traditional TV can still overshadow other options in terms of reach and frequency. The average adult still spends almost four times the number of minutes each week watching TV as they do consuming online video — desktop, smartphone and tablets combined, including streaming programs. Total time spent with online video is still less than television, no matter what age group you consider.

Between 2003 and 2013, smartphone usage went from zero to 139 million users nationwide. During that same timeframe, the number of persons who used television also grew by more than 10% to a number still twice the size of smartphone users.

And newspaper readership, which has continuously fallen over the past few decades, now appears to have leveled off (gasp!). It can still be very effective for many demographic segments. Even adults 18 to 34 — a demo many think of as having left newspapers behind — still read offline editions. In the research conducted by the Sells Agency, roughly half of all consumers had read a printed-on-pulp newspaper within the past week. Factor in online reading of those newspapers and the number grows to almost two-thirds.

New media channels are subject to rapid changes, too. In the early days of online display advertising, click-through rates hovered above 10%. As the novelty wore off, click-through rates plummeted, dropping below 1% by the turn of the century. They continued to decline, and today are almost insignificantly small —around 0.1%. The purpose of online advertising has now shifted away from primarily driving traffic tied to promotions to instead generating awareness and brand-building; clicks have become an added bonus, not the main metric of success.

The variety of ad sizes available today helps make those ads harder than ever to miss. Those sizes, however, are not created equal. The Sells Agency’s study found that the best-performing sizes had click-through rates nearly ten times greater than the lowest-performing ones. According to Google Adsense the most successful sizes are:

The bottom line? Financial marketers targeting local markets might not need to completely abandon traditional media channels in favor of new media. The ideal mix utilizes all (or at least most) media, recognizing that no new channel is so dominant as to replace the reach available through weakened traditional channels.

Additionally, planning the most effective media mix varies greatly from one local market to the other and depends greatly upon the market goal of a campaign. These are all reasons why developing and deploying an effective media plan now requires more time and a higher level of expertise than ever before.

Download the entire 16-page report from the Sells Agency, “The State of Media Consumption” (instant download, no registration required).