Subscribe Now Get The Financial Brand's FREE Email Newsletter
Unity One Credit Union woos consumers who are sick of excessive fees and high-pressure sales tactics with an outrageous fanny-slapping campaign.

Last fall, One Nevada Credit Union made a stink with BACON, a checking acquisition campaign built around a racy acronym: “Bad Ass Checking (from) One Nevada.”

Some people loved BACON, while others called it a marketing foul. But when the folks at Unity One Credit Union caught wind of BACON, they were inspired to cook something up themselves. 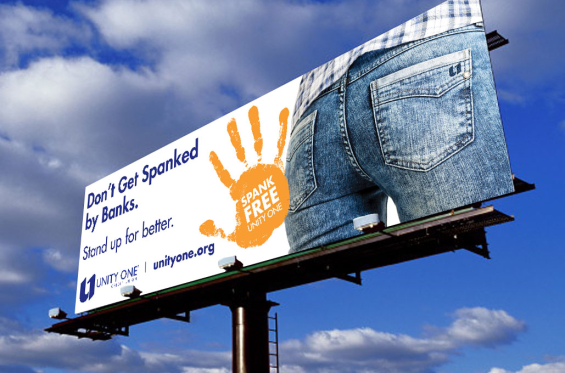 Based in Fort Worth, Texas, Unity One worked with BlueSpire Strategic Marketing and local agency Glint Advertising to conjure up the a new campaign that spanks banks. While nowhere near as shocking as One Nevada’s BACON, the new campaign still has an edge. Artwork anchoring the campaign, which launched in Q1 this year, uses images of handprints superimposed over denim-covered backsides. “Don’t Get Spanked By Banks,” the cheeky tagline reads.

All About Cutting Through the Clutter

What prompted Unity One down this particular path? According to President/CEO Gary Williams, the main push came from the CU needing to break through the clutter in highly competitive markets surrounded by banks. Williams says awareness of the credit union in its Dallas- Fort Worth market was low.

“Almost nobody had heard of us, despite the fact that we had branches in prominent locations and often advertised in local newspapers,” Williams explains.

Williams concedes that the lack of brand recognition stems in part from “falling into the trap over the years of just advertising products and not really promoting how we’re different and better than the big banks.”

“Our marketing pieces often looked like all of our competitors,” he admits.

CEO Says, ‘I Want Something Provocative’

So Williams challenged his marketing team to create “a provocative campaign designed to draw attention and get people to notice us.”

“Once we can gain the public’s attention, we can then better differentiate our competitive advantages,” Williams told his team.

According to Jen Joly, BlueSpire’s Senior Director of Marketing, Communications and Brand Management, the basic strategy was to “deliver a significant presence without the use of large amounts of higher-cost traditional media.”

That meant the credit union would use some guerilla tactics — random acts of kindness.

“Perhaps random acts of kindness aren’t as novel as they used to be a few years ago, but they’re still very effective for a community-based organization like Unity One,” Joly explains. 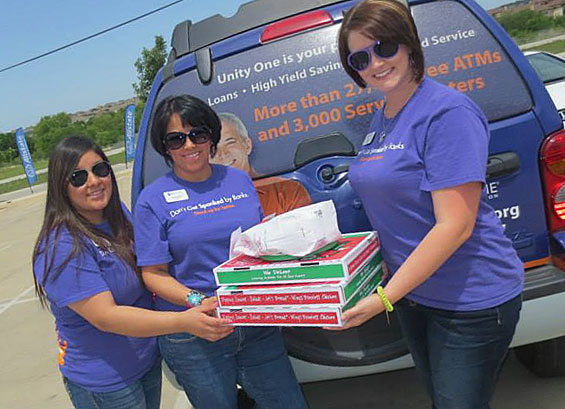 Photos from Unity One’s “Random Acts of Kindness” push, part of the “Spank Free Banking” campaign. Those in the community who benefited from one of the credit union’s good deeds also received a bank-spanking flyer in the shape of a hand. 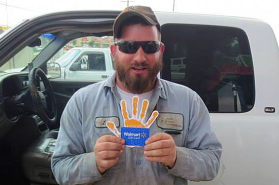 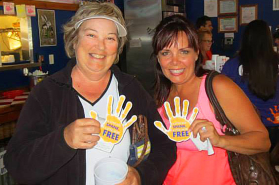 Other parts of the bank spanking campaign include interactive and traditional marketing messages.

“We really wanted to take a multi-channel approach to this campaign,” Joly adds.

“That campaign used a swear word, and Gary Williams didn’t want to go that far with Unity One’s campaign,” Joly recalls. “Dallas-Fort Worth is a bit more conservative than the area One Nevada serves. He still wanted to create a buzz though, and do something that’s a little bit shocking while also being unique and fun.”

“We wanted to really play on the kind of discomfort people feel when they walk into a bank these days, and feel they’re being sold to,” Joly says of the “Spank Free Banking” concept. “We want to let people know there are better options out there.”

Different Media for a Different Campaign

Another differentiator of the campaign is how it eschews some of the more traditional media channels — including print, radio and TV — in favor of interactive and word-of-mouth efforts. 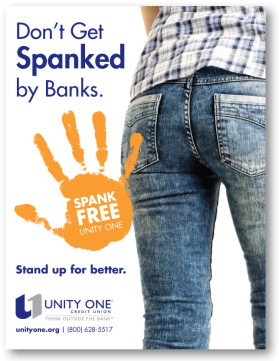 Unity One’s four Texas-based branches have been conducting all sorts of “random acts of kindness” within their communities since the campaign kicked off in March. So far, these guerilla tactics have focused on surprising people —sometimes in partnership with local businesses — with free stuff like cash, gift cards, food and t-shirts.

The campaign’s interactive aspects, on the other hand, consist of e-mail, social media, landing pages, pay-per-click advertising and remarketing components. There are some traditional elements, including billboards, in-branch and point-of-sale signage.

According to Joly, Unity One decided to pass on radio and TV because the credit union didn’t have the budget for it.

“We definitely explored it, but Dallas-Fort Worth is a really big market for TV and radio,” Joly explains. “In the end we came to the conclusion that billboards in high-volume traffic areas would give us the largest reach with the smallest amount of money, especially since we were going to invest in online search and remarketing, too. So, we thought we’d get a pretty good sized bang for our buck even if we avoided those channels.”

The point of the campaign is to boost awareness of Unity One within the communities it serves. Joly and her team conducted an awareness study before the campaign kicked off and will complete another after the campaign ends.

Investing in the kind of awareness studies the credit union has conducted for this campaign “is pretty unique for a credit union of this size,” Joly says. “A lot of times, the focus is on being quick to market and getting something out there. Not many financial institutions of this size want to invest the money and the time that are required of this kind of study.”

“Often, awareness campaigns like this one are so focused on getting out a great message, but there’s not a lot of measurement in place to test whether or not the message was successful,” adds Joly.

She and her gang, along with the team at Unity One, are keeping an eye on other metrics throughout the campaign, too. For instance, all of the e-mails and landing pages associated with the effort were built using the HubSpot platform, which is measuring clicks and visits, while BlueSpire is measuring PPC and remarketing portions of the campaign, while the credit union is tracking accounts opened, new members and the like.

Ultimately, whether or not this particular investment proves to be a worthwhile one won’t be known for a few months yet, as the “Spank Free Banking” campaign isn’t expected to wrap up until September or October.

But Williams, Unity One’s CEO, reminds us that product sales aren’t one of the key indices for this campaign: “We’re only trying to draw attention. We believe that once we get people to notice us, they will hopefully want to learn more about us, and once they do that they will join Unity One.”

Erayne Gee Hill, Unity One’s AVP of community and public relations, says she’s pleased with the results they’ve seen so far. “We’re quite pleased with how the campaign is faring electronically and on social media. Our click-through rate on e-mail is higher than normal. The campaign’s landing page is drawing attention and gaining views. And our Facebook impressions for certain posts have skyrocketed.”

Williams, who admits he “was a little nervous at first about featuring spanking and butts in the credit union’s advertising,” says they haven’t received any negative feedback regarding the imagery.

“The fact that I was a little nervous told me this campaign would likely do what it was designed to do — grab your attention and make you want to learn more about the message.”