Every two years, TV viewers around the world are treated to some of the most spectacular, inspiring ads ever created. The cinematography, the story lines, the editing are all extraordinary. Unfortunately, most of these ads don’t promote the companies who paid millions to produce and air them. They only seem to build the Olympic brand, such this beautiful mintue-long spot for the 2010 Winter Olympics from Visa.

Narrated by Morgan Freeman, the ad that talks about themes like “imagination,” “spirit,” “precision,” “speed,” “grace” and “magic,” concepts that seem markedly unrelated to either Visa or banking. It’s almost like a PSA for the Olympics: “This feel-good moment of unity and celebration is brought to you by…Visa! More People Go With Visa.”

You may prefer watching this kind of spot versus an ad for something like “Head On, apply directly to the forehead,” but you’ll quickly forget it was Visa who made it once you see a dozen other advertisers trot out their similarly commercialized celebrations of Olympic spirit and pride. You can see another gorgeous Visa spot for the Winter Olympics here.

A blogger snapped this photo of a “rock” on the teller counters at Union Bank. It turns out the “rock” was made of soft foam. “About as solid as a marshmallow,” the blogger wryly notes. 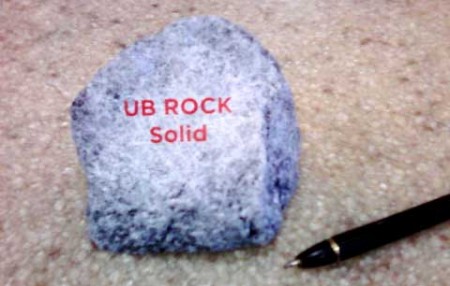 An elevator wrapped in graphics that look like a bank vault. The sign inside the elevator reads (translaätion): “Keep your money in a safe place.” Clever out-of-home advertising. 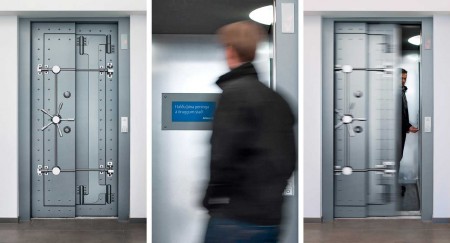 SunTrust Bank recently launched Swap a Solid, a Facebook application that provides users with a forum for exchanging goods and services with their Facebook friends. At the Facebook app, you can “Request a Solid,” or view “Solid Requests.” The Swap a Solid name harkens back to the bank’s current ad slogan, “Live Solid,” although some people might think it’s disgusting to “swap a solid” with anyone other than their spouse. 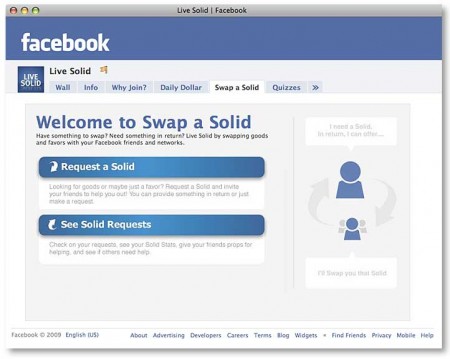 Deutsche Bank recently launched a free widgetized version of its “Carbon Counter,” a landmark digital billboard in New York City which displays the running total of long-lived greenhouse gases in the atmosphere. The widget comes as part of the bank’s broader campaign to raise public awareness of climate change and encourage investment. (A widget is a downloadable, stand-alone application that can be embedded into an end-user’s web page or desktop.) It’s very interesting to see a bank commit itself so strongly to one side of a political hot potato.

You’re probably burned out on the holidays, but this video is too good to pass up. It’s a singing, dancing lip-synch of a techno version of “Jingle Bells.” The choreography involves the credit union’s entire staff — some 35+ people — in one, single 3-minute take. It is toe-tapping fun, festive and well-produced, yet not so slick that it feels expensive or pretentious. Hat tip to Christopher Stevenson at CUES who was the first to spot the video, and kudos to agency Raoust+Partners, who reportedly produced it.

When Fort Belvoir Credit Union decided it was time to drop the “Fort” from its name, they turned to Third Degree Advertising for a new brand image and identity that is decidedly unmilitaristic. 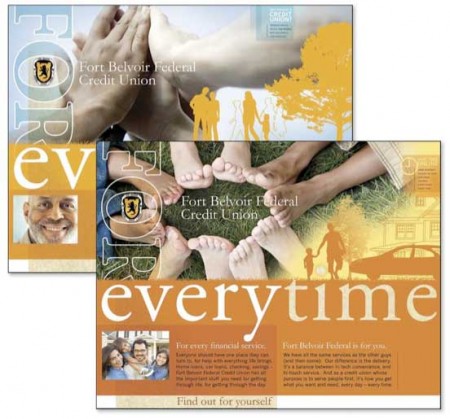 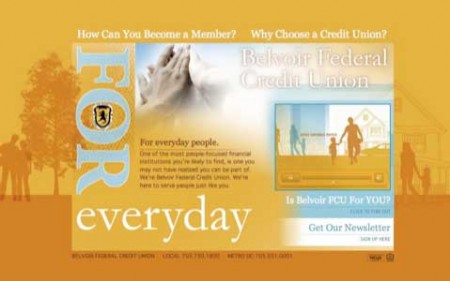 This minute-long TV spot features CG animation with a narrator in a virtual world who describes a bank that is unbelievably perfect. Quite frankly, it sounds too good to be true. The spot ends with the tagline, “Simplicity is the ultimate sophistication.”