Caixa – Fixed But It Moves

What a visually clever way to convey the bump-rate concept. (If it doesn’t work for you, try blurring your eyes.) The copy says, “It’s fixed but it moves. Double Effect Deposit. A fixed rate of interest that goes up if interest rates do.” Agency: TBWA Spain. 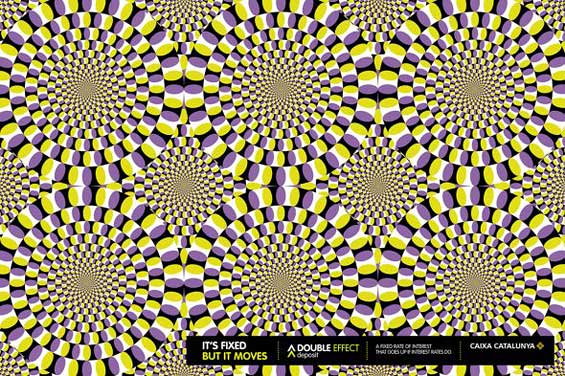 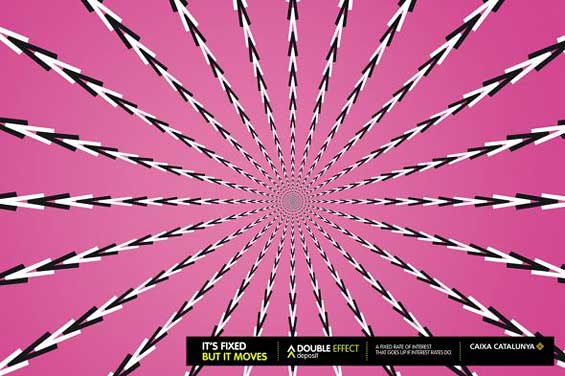 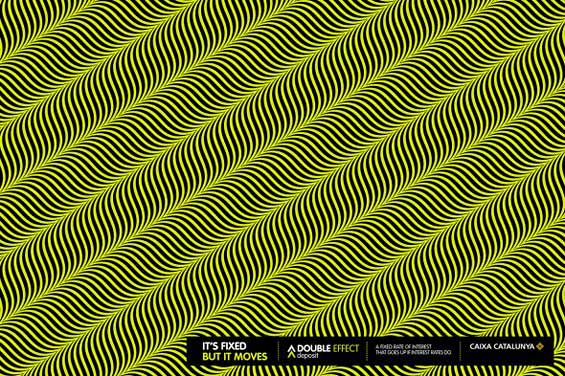 You’ve never seen a car more hairy or furry than the one driven by the bald guy in this spot for “very personal loans.” Very personal indeed.

This promotional giveaway, circa 1962, includes an actual penny. It proves that the idea of handing out “free samples from the vault” has been around for a while. A reader of The Financial Brand is selling the actual printed piece from his private collection.

This commercial dates back to 2009, but it’s so unusual, it’s worth sharing now. A spokesman holding a two-headed sheep promises customers fifty uncloned dollars when they get a checking account. Who knew the cloning of dollars had gotten that ba-aa-aa-ad…? Agency: TDA Advertising & Design.

“At 1stBank, we do not clone, nor endorse the cloning of U.S. currency. It would be against international law and a breach of banking ethics. The $50 you receive upon opening a free checking account is real money and has not been duplicated in a covert genetics laboratory. So at your earliest convenience, go to 1stBank or visit us online, and get $50 that has never been cloned.”

This bus shelter display — similar to a 3M display for security glass — is made of real coins. The headline: “Millionaires take the bus.” The copy: “Taking mass transit versus driving saves roughly $5,000 per year. If those savings are invested over a typical 450-year career, you’ll retire a million dollars wealthier.” Agency: OLSON. 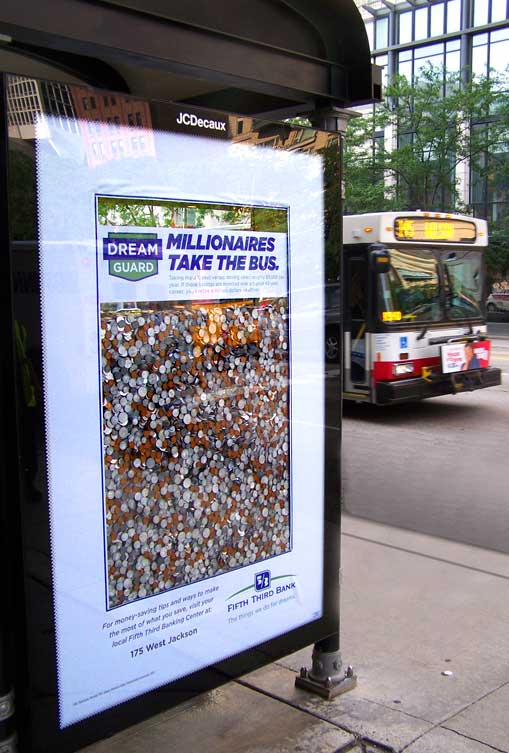 A promotional microsite used to support the credit union’s marketing slogan, “Unbank With Us.” All the links redirect back to the main Connex website. Note: The microsite’s URL expires September 2010. Hopefully they won’t let what happened to TIAA-CREF happen to them. 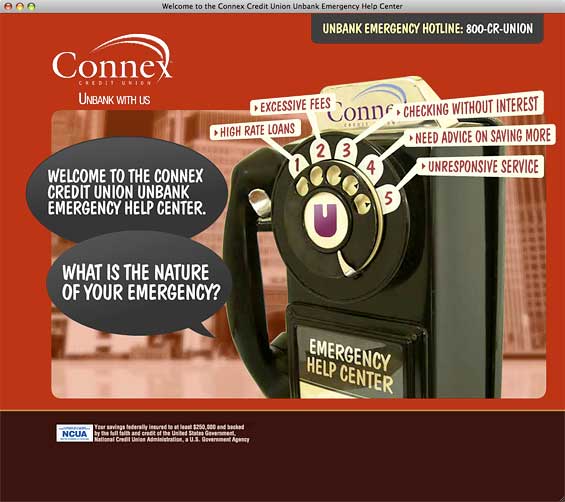 The image of a car is knocked out of concrete, a sailboat from water and a home from grass. “The only thing missing is the loan.” Agency: Kristof Creative. 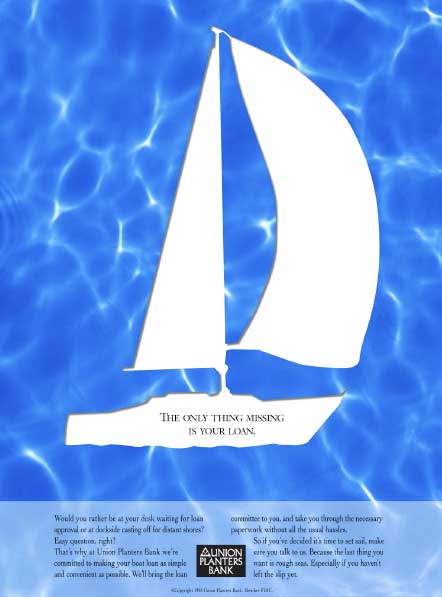 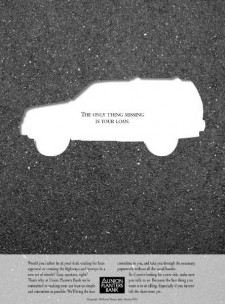 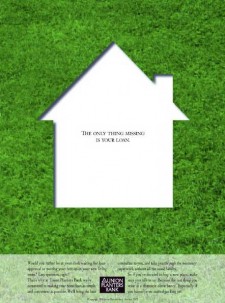 Spots like this remind us that it is possible to produce a quality TV commercial without hiring a cast of thousands or blowing a huge pile of cash. You don’t have to go to Pixar to use special effects and video graphics; they are accessible to just about everyone these days. The only real limitation anymore is your imagination.

“From hard hat wearers to do-it-all homemakers. To say you work hard is an Understatement. So why are you playing games with a financial institution that doesn’t work ashard for you? Get Unstuck with a not-for-profit credit union that helps folks and families like yours to hang on what you’ve already hard-earned. Unbank with Northwest Georgia Credit Union. Where the difference is unmistakable. Northwest Georgia Credit Union. Unbanking. Unbelievable.”

A series of short movie theater ads created to increase brand awareness among young adults. They prove that you can create a compelling, 15-second message on a budget of virtually nothing. The hands seen in the spots are those of the ads’ copywriter Shawna Harch and art director Jamie Chabot. 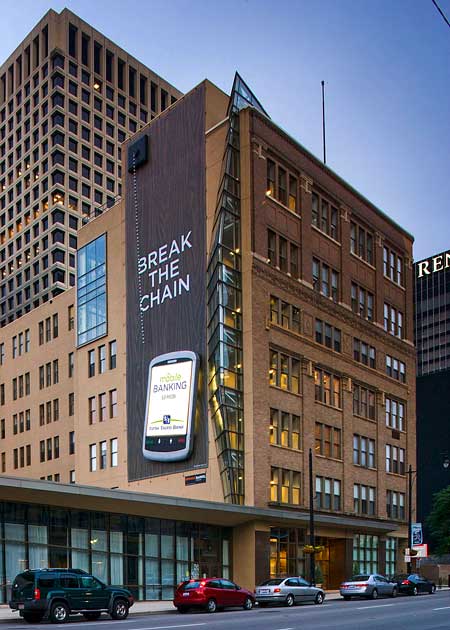 PNC – If Your Money Could Talk

If your money could talk, it wouldn’t let you buy milk from a convenience store, it wouldn’t take the day off, it wouldn’t get suckered by low intro rates, and it would take more than $50 to convince it to switch banks. Agency: Kristof Creative. 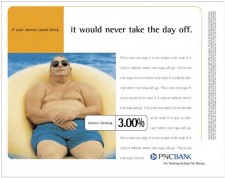 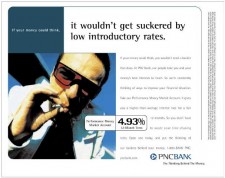 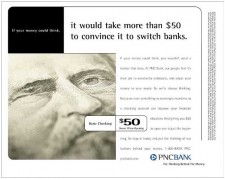 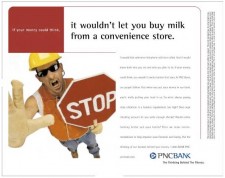 A couple are on their first date. She lets the guy know immediately that she is going to be a creepy stalker. The spot pushes mobile alerts: “Know about trouble before it happens.” You have to think about it a little to figure out how the creative execution connects with the message in each of these four spots. The other three spots in the series are equally surreal. 1stBank’s “Cloning” spot from 2009 (above) is better. Agency: TDA Advertising & Design.

1STBANK – DATE
A guy’s date warns him about her creepiness. If you like this one, check out “On-Hold,” “Pills” and “Save.”

Citi has used its little red umbrella as a clever visual “bridge” linking two concepts for a few years now. But executions in years past were markedly more enjoyable than this somber and straightforward message. This is just boring. In fact, it’s so dull, it would only feel appropriate running in late 2008. Source: Cashcow.in. 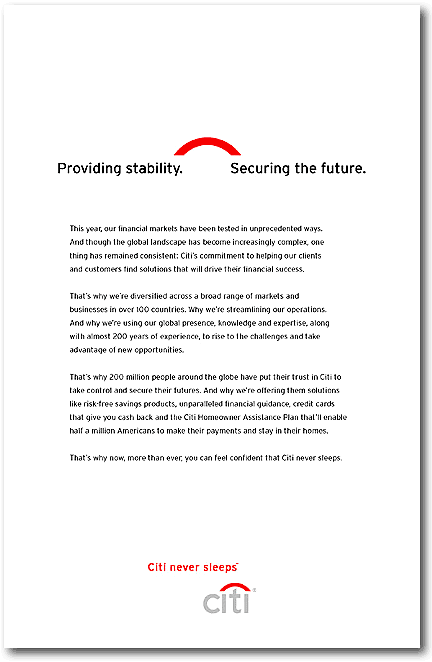