You have to hand it to Commonwealth. The Australian banking giant really knows how to get people talking about its ads… and not always in a good way.

Back in 2008, Commonwealth was widely derided for hiring an American ad agency who lampooned Aussie cultural stereotypes in a failed attempt at double-reverse psychology. The country was aghast, and, following a wake of populist outrage, the quasi-satirical campaign was duly replaced.

Skip ahead to 2012. This time, Commonwealth is trying another risky approach: a teaser campaign.

With a teaser strategy, an advertiser tries to build interest in a forthcoming campaign by running ads anonymously — without any logo or other way to identify the brand behind the spots. People’s sense of curiosity (so the argument goes) should fuel greater interest in the campaign when the advertiser is revealed vs. rolling out branded ads under a more traditional approach. It’s supposed to be a big mystery, followed by a big payoff.

A little while ago, ads bearing little more than the word “CAN’T” started appearing in outdoor venues across Australia. The strategy seemed to be working, as Aussies speculated about what the giant “CAN’T” letters everywhere meant, and which brand might be responsible.

Then came the reveal. Commonwealth outed itself in a one-minute TV spot titled “An Ode to Can.” The commercial uses a famous Australian actress to deliver motivational poetry about what “can” and “can’t” be done. In the spot, Toni Collette, who is perhaps best known for her role in Muriel’s Wedding, reads a rhyme that has the familiar tempo of Dr. Seuss:

There’s a four letter word as offensive as offensive as any.
It holds back a few, puts a stop to the many.
You can’t climb that mountain. You can’t cross the sea.
You can’t become anything you want to be.
You can’t hit a century. They can’t find a cure.
She can’t think about leaving or searching for more.
Because can’t is a word with a habit of stopping the ebb and flow of ideas.
It keeps dropping itself where we know in our hearts its not needed,
And saying don’t go when we could have succeeded.
But those four little letters that end with a T,
They can change in an instant when shortened to three.
We can take off the T.
We can do it today.
We can more forward, not back.
We can find our own way.
We can build. We can run. We can follow the sun.
We can push. We can pull. We can say I’m someone
Who refuses to believe life can’t be better
With the removal of one insignificant letter.

Key Questions: It’s a wonderfully touching poem indeed, but what relevance does it have to banking? What makes this message appropriate for Commonwealth? Why couldn’t any advertiser run this campaign? Wouldn’t it be more appropriate for a charity, say a cure-for-cancer cause?

Commonwealth created a microsite to support the campaign, but — somewhat ironically — you CAN’T watch the video poem they’ve embedded on the site’s homepage. Checking the bank’s YouTube channel for the “Ode to Can” video, you’ll see the message, “Sorry, this video is not available.” Perhaps someone forgot to negotiate with Toni Collette’s agent for the digital/online rights? (Note: Readers have complained that Commonwealth’s microsite is down. Actually, it’s availability has been spotty. It comes and goes. When this article was written, it was down. But by the time the article was published, the site was back up again. Reports continue to come in saying it’s down. As of 9:12 am PDT on Monday, June 4, 2012 the microsite was up… but the embedded video still doesn’t work.)

A quick scan of Twitter gives you a good sense for people’s feelings about the campaign. 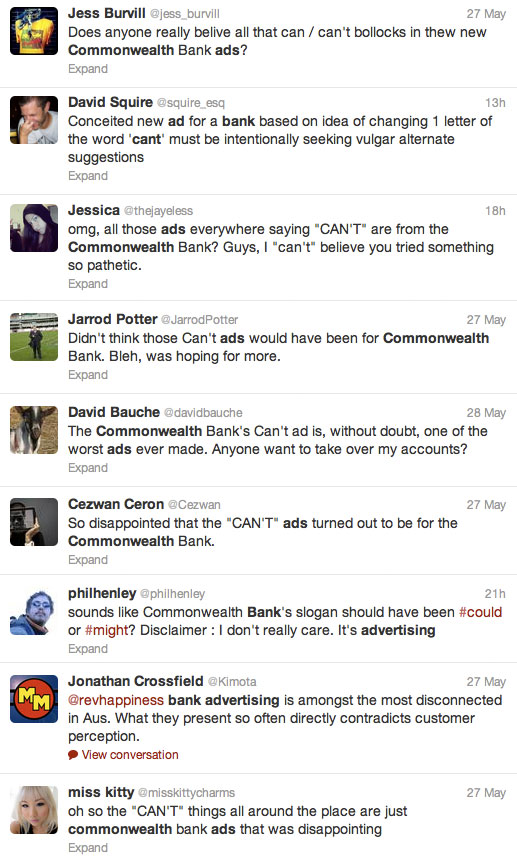 Why all the hostility? Because the lofty themes presented in the campaign don’t jibe with consumers’ collective perception of banks generally, and the Commonwealth brand in particular. People are having a very difficult time reconciling the campaign’s grand philosophical concepts with the nickel-and-dime realities of a megabank.

Hmm, Where Have We Seen This Before?

B&T, a publication covering the advertising industry in Australia, reports that this isn’t the first time Commonwealth Bank’s ad agency has used the “Can/Can’t” teaser approach. Back in 1999, M&C Saatchi ran a campaign for British Telecom with striking similarities. According to a 1999 press release from the agency:

“The outdoor, press and radio drive introduces a new BT catchphrase, ‘You Can’, aimed at senior businessmen and decision-makers. This is the first work for BT from M&C Saatchi since it was appointed to its roster… Focusing on the idea that chief executives hate the word ’can’t’, poster sites on major routes into London will initially carry a teaser campaign reading simply ’Can’t’. After a few days, the teaser will be transformed into ’Can’ with paint, eggs and graffiti, above the line, ‘BT. You Can.’”

One of advertising’s dirty little secrets is that a good idea presented to Company X in one industry will often be presented to Company Y in another sector. Usually when this occurs though, Company X had rejected the concept and chose to never implement it. The agency is figuring, “Heck, we like the idea even if the Company X didn’t. We can dust it off, change some things around and present it to another (more deserving) client.” While recycling work is common in the ad biz (more common than clients would like to believe), very rarely does an agency regurgitate campaigns they’ve actually ran in the past.

A crafty competitor, the much smaller Heritage Bank ($7 billion in assets), rushed in to scoop up Google Adwords for the search term “what is can’t.” The bank’s marketing team saw all of Commonwealth’s teaser ads and figured public interest would be high, so they bought some keywords and set up the following web page: 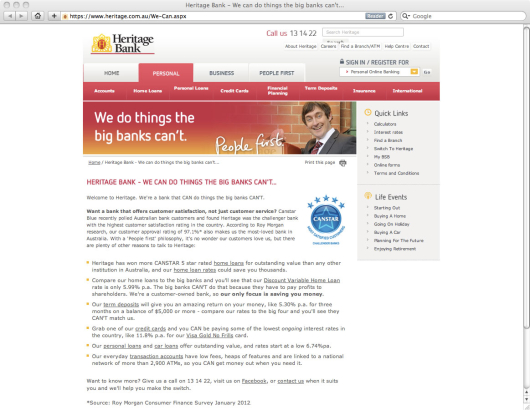 Heritage Bank, a much smaller rival to Commonwealth, linked this web page to a Google Adwords campaign. Heritage talks about the things a small bank “can do that big banks can’t.”

If you’re going to invest in a massive ad campaign, you need think about the ways your competitors can co-opt your message. That means paying attention to details like Google Adwords.

Like many big brand marketers, Commonwealth keeps burning through one ad campaign after another. In the span of four years, the bank has rolled out three radically different themes: first an awkward parody, then a series of more serious black-and-white spots, and now the motivational can-do poetry approach.

Reality Check: Switching gears and changing messages is not how enduring brands are built. Every time a marketer introduces a new look and/or a new theme in its advertising, it muddles the brand and confuses consumers. Effective brand building requires marketers to maintain a consistent message over many years.

Hiring and firing ad agencies gets many marketers in trouble. If there is anything a newly hired ad agency can’t stand, it’s being forced to continue the work of their predecessor. The new agency wants to make its mark and demonstrate its creativity — out with the old, in with the new. This also happens quite often when an organization hires a new VP of marketing.

Reality Check: The best brands know exactly who they are, and precisely what they want to say. They stick to their guns regardless of who’s at the helm, or the agency hired to execute their ads.

Banks need to be very careful when producing general brand awareness ads. When banks don’t put their products and offers at the center of their marketing efforts, it can cause some to make ridiculous statements and implausible claims — e.g., “We deliver 5-star service to every customer, every day,” or “We are 100% dedicated to making your dreams come true.” People aren’t idiots. Today’s savvy consumer can smell marketing B.S. a mile away. They know banks are in the business of saying “no” as often as they say “yes.” Banks are as capable (if not more so) of “can’t” as they are “can.”

If a bank’s marketing message doesn’t ring 100% true, you should expect nothing more than derision and cynicism. If you dish out a slough of hollow platitudes and meaningless clichés about “making the world a better place” and “fulfilling people’s dreams” because you “truly care about people,” your marketing will be met with eye-rolling incredulity.

Teaser campaigns are extremely risky. They are risky enough for any business in any industry; if the reveal doesn’t have a monumental payoff equal to the build up, the entire effort will be an utter and complete flop. A teaser campaign is doubly perilous for banks, because teaser campaigns are supposed to be fun, and consumers think banking is anything but fun. Any bank toying with a teaser campaign will need a ton of goodwill and positive brand equity to overcome the general feelings of animosity consumers feel towards financial institutions. Otherwise, consumers will feel little more than disappointment when discovering the teaser campaign they’ve invested themselves in is… from a lousy bank.