It’s no secret. Michigan’s economy is all doom and gloom these days, or so it would seem based on what you read in the news. Chemical Bank isn’t hiding from this fact in its latest brand ads. Recently, the bank unveiled a brand campaign addressing Michigan’s economic malaise.

The campaign kicked off in July with 14 billboards scattered throughout the state’s Lower Peninsula that bore only two words on a green background — the mantra “Save Michigan.” Nothing else. No logo. No website. 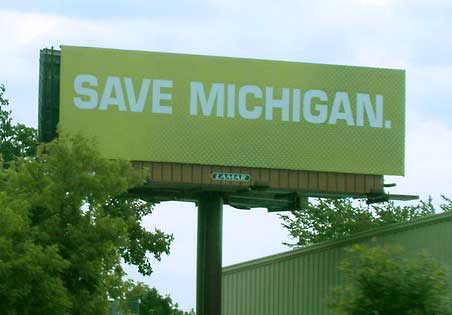 Know one knew who was behind the ad campaign. People speculated. Theories circulated.

Ten days later, Chemical added the URL savingmi.com to the billboards and the mystery was solved. The URL takes you to a microsite explaining the campaign, with cross-links back to the bank’s main website. 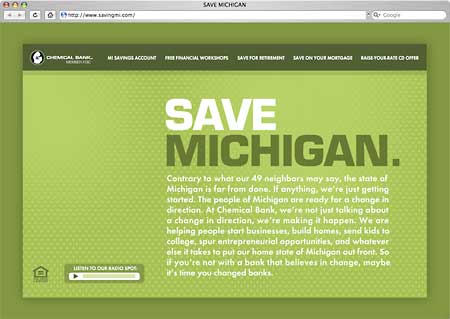 It’s hard to gauge how many other Michigan marketers are taking a similar approach in their advertising these days, but Chemical Bank certainly isn’t the only one. Maybe Michiganites don’t want another reminder of how badly things suck?

Chemical Bank hopes people will appreciate much-needed financial advice on how to get through difficult times.

The series of free workshops is aimed at reinforcing the practical principles of personal financial management.

“We wanted to change the conversation and to get people talking.”
– David Ramaker
Chairman, President & CEO

Chemical Bank would not say what the campaign is costing nor how it plans to measure its success, but they admit this much: Sales weren’t the focus of the campaign. They assert that the campaign is less about promoting products than positioning Chemical as a strong institution in a struggling economy.

“We wanted to change the conversation and to get people talking,” said David Ramaker/Chairman, President & CEO of Chemical Bank.

At least one branding expert thinks this is a mistake: “Awareness is no way to measure. Image is fine, but they still need to get people through the doors.”

Despite how Chemical wants this campaign to be perceived, its motives aren’t purely magnanimous. They are using the campaign’s microsite to push their new, cleverly-named “MI Savings Account.”

Reality Check: There isn’t much chatter on the blogosphere — nor anywhere else for that matter — about the campaign. This is one key indicator of a campaign’s buzzworthiness (aka, it’s ability to “get people talking.”)

Key Question: Assuming the bank has people’s attention, what’s next?

Later this fall, “Save Michigan” will give way to a larger “Made in Michigan” branding campaign emphasizing Chemical’s 90 years in the state.

According to the bank, “Save Michigan” is the first phase of a larger brand campaign that will celebrate Michigan and demonstrate how Chemical Bank is doing its part by offering “a solid base of financial products.”

The campaign, which also includes radio ads, comes from Gravity Six Alliance in Grand Rapids, Michigan. You can read the script for the first radio spot, or go to the savingmi.com website and listen to it on the microsite’s homepage.

Chemical Bank, with $3.75 billion and 129 branches in 31 Michigan counties, is the third-largest bank headquartered in the state. It has operated exclusively in Michigan for over 90 years.