Options for depositors looking to grow their savings are few and far between. Since the Federal Reserve has vowed to suppress rates down at near-zero levels for the duration of 2013, financial consumers are forced to seek higher-yielding accounts like CDs to barely eke out a return on balances.

With margins so narrow, there’s much at stake for both depositors and financial institutions alike. A 0.05% spread can be the deal maker… or the deal breaker — for both parties.

The conventional wisdom among savvy savers suggests credit unions might have the best CD rates. But is this the case?

GoBankingRates.com, a B2C website that aggregates interest rates for retail financial institutions, surveyed more than 10,000 CDs rates from banks and credit unions across the U.S. The study focused specifically on 6-month, 1-year and 2-year term deposits.

When broken down by type of institution, local bank average rates are slightly higher than credit union rates for 6-month and 2-year CDs, but only by the narrowest of margins. Banks beat credit unions on 6-month CDs by 0.02%, and by only 0.01% on 2-year CDs. With 1-year CDs, credit unions were 0.01% better than banks.

So how much money are we talking about here? Pennies. If you invested $1 million into a 1-year CD, a difference of 0.01% would work out to $100 — enough for a decent bottle of wine. For depositors investing a more modest sum of $10,000, the extra 1/100th of a percent would pay a dollar in additional earned interest. 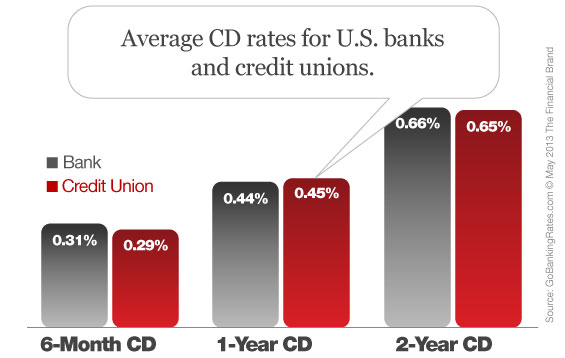 The interest rates used in the study are accurate as of April 30, 2013 and come from GoBankingRates database with over 4,000 U.S. banks and credit unions. GoBankingRates manually collects and updates the database from online published rates on a regular basis. Interest rates assume an individual depositor with a $10,000 principal.

“Interest rates on deposit products like savings accounts and certificates of deposit are already so low across the board that these minor variations are negligible,” notes GoBankingRates managing editor Casey Bond. “Depositors will not experience any material gains or losses.”

“What the data tells us is not that local banks are superior to credit unions,” Bond concludes, “They are just as competitive in terms of CD rates.”