In March 2010, Credit Suisse named Capitec as one of the “Great Brands of Tomorrow” — the only brand in Africa on the list. Capitec posted a creative brief on Idea Bounty, a crowdsourcing site for advertising concepts, asking for print and online banner ad ideas that celebrated the honor. The prize for the winning concept? $5,000. The deadline? Seven days.

In less than a week, 600 concepts had been submitted (although Idea Bounty says only about 30 of those were “really outstanding Ideas”). By the end of the month, Capitec had made its selection and had the winning concept running in local papers.

“I’ve always thought the 1970’s agency model still used widely is past its sell-by date, but never considered crowdsourcing as a solution,” Charl Nel, Capitec Bank’s Brand Custodian, confessed to Idea Bounty. “But this method — combined with a strong and experienced marketing team who controls strategy and packages tight briefs — might just be the next big thing in our industry.”

“This takes care of the cost issue and address the issue of in-house agencies getting stale over time,” Nel continued. 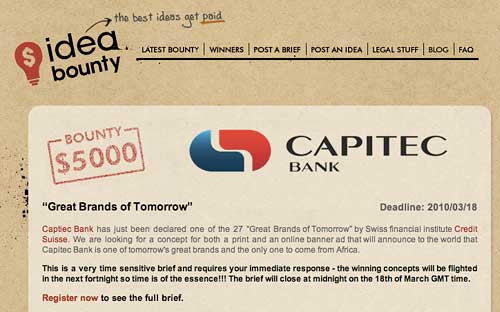 IDEA BOUNTY
A website for crowdsourcing creative ideas that has become popular with big brands like BMW, Unilever and Red Bull.

“We realized that creative ideas can come from everywhere and anywhere. A great idea can come from a housewife in Romania, a municipal worker in Lusikisiki and a lawyer in our own legal department,” said Capitec’s Nel in another interview. “The housewife, municipal worker or legal department colleague may not provide consistently good communication ideas, but for a specific brief they might just bring insight to the table that we do not think of in the normal or traditional approach.”

Nel said working with someone else’s idea brings its own set of challenges. “The way you interpret and execute it may differ from what the source had in mind,” Nel observed. “However, if your own creative team understands the brand well, you can work with any idea and implement it successfully. An experienced team can even add to the original idea and make it even more powerful.”

“Inexperienced marketing departments should not use this method, as you need to really understand your brand to be able to leverage the ideas,” she added.

Nel also had advice for others considering crowdsourcing their creative, saying the process wasn’t for the faint-of-heart. “This is an open and transparent process which means you need a thick skin. It all depends on how you handle criticism and the debate that may follow.” 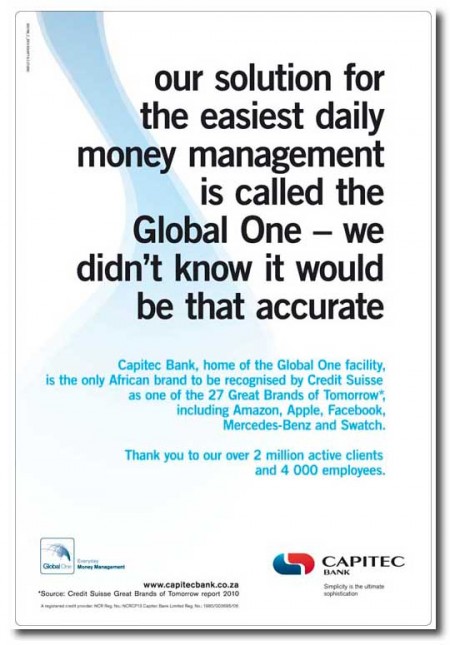 The winning concept came from copywriter Amod Munga and art director Deon Hug. Even though the creative duo were both based in South Africa, they never met in-person during their Capitec collaboration. “We pulled it together and got the entries in without ever sitting face-to-face,” Munga told The Financial Brand. “The whole collaboration was fully 2.0.”

“There were more ‘left of centre’ approaches that were fun to execute, even though we suspected the bank wouldn’t go for them,” Munga said. “The one that was chosen wove Capitec’s flagship product into the copy and I think they really liked that.”