Australia’s Ad Standards Board has cleared this commercial featuring gay male partners (business or personal) who moan about late payments and clients’ typical excuses. Gay rights activists complained that the ad used “gay stereotypes.” Hello…? Advertisers have been using stereotypes forever; that’s what advertisers (and comedians) do, whether it be “blue collar workers,” “soccer moms” or “pierced-and-tattooed slacker delivery guys.” Regulators ruled that “the men are presented in a manner which, although somewhat stereotypically effeminate, focuses on their frustrations as business owners and is not negative.”

This ad is pretty bad. On the left side, someone hands an umbrella to a business man with a question mark above his head. A flock of birds flies in from the right. The copy reads, “We try to get to you with solutions before you realize you need them. By being prepared and informed, we’ve got you covered no matter what’s on the horizon.” The slogan says “Anticipating the needs of business.” The ad agency’s art director may love this kind ad, but the concept is so complicated, the execution is so subtle, and the copy is so small that the message simply isn’t getting across. “We try to give you an umbrella before birds poop on you.” Great, thanks.

Halifax Bank’s ad campaign is set in a fictional radio station dubbed Halifax FM. Ads star the bank’s employees broadcasting musically-enhanced messages to customers in a pop radio morning show parody. The spots try to be amusing and lighthearted, but they just seem to grate people’s nerves. For instance, there are some 226,000 results for “I hate Halifax adverts” on Google. The uproar may have cost the ad agency its relationship with Halifax. Take a look for yourself and see what you think.

( Editor’s Note: Two of these YouTube videos are no longer available. )

This 1961 Volkswagen is the official bus of First National Bank of Central Alabama. According to Bessie’s Facebook page, her mission it to “use my unique abilities and characteristics for promoting the best bank in Alabama.” It’s a clever and unexpected way to connote a range of brand characteristics: austerity, stability, durability, frugality, thriftiness, etc. The bank comes across as small, friendly and approachable. Note: a credit union in Utah has also used a stretched VW bug limo as part of its marketing mix (although it was tie-dyed). 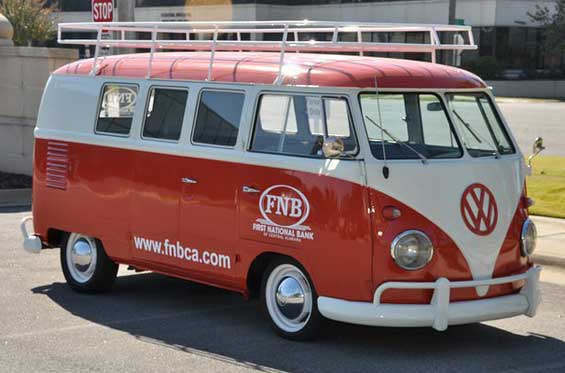 If you know what a Zamboni is, you’ll probably think this unconventional advertising “vehicle” is fan-tastic. 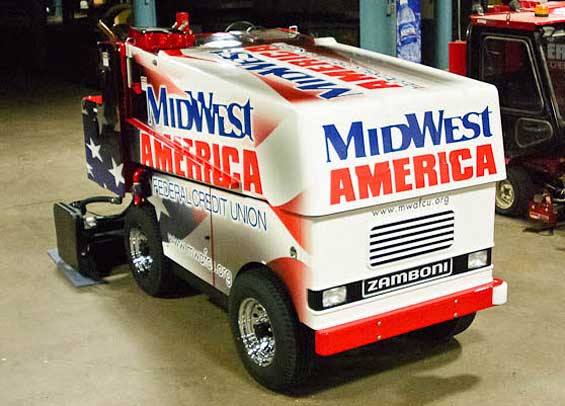 President’s Choice Financial staged quasi-protests with signage and employee apparel bearing the message, “Stop paying bank fees.” The campaign included TV, print, online, in-store and out-of-home components, making it the largest run by the financial institution in 12 years. President’s Choice has some ties to CIBC, but it is independently owned and operated by Canadian food giant Loblaw (hence the shopping carts in the photo). They are direct competitors of ING DIRECT. 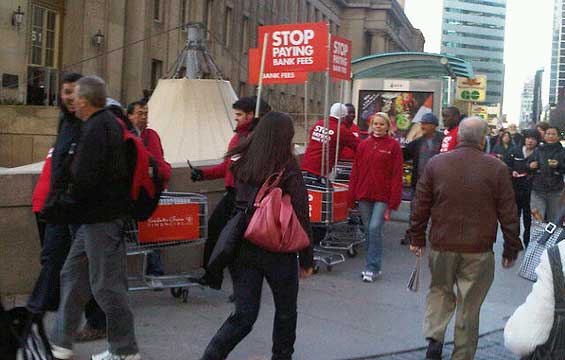 Here’s a first. QR codes are supposed to be used in offline media, like print and outdoor…right? Not so. Netbanker spotted this QR code on Chase’s homepage. The banner ad promotes the bank’s new Android mobile banking app. Android smart phone users could scan the ad’s QR code to download the app. The idea of pointing your phone at your computer to take a picture seems somehow strange though. 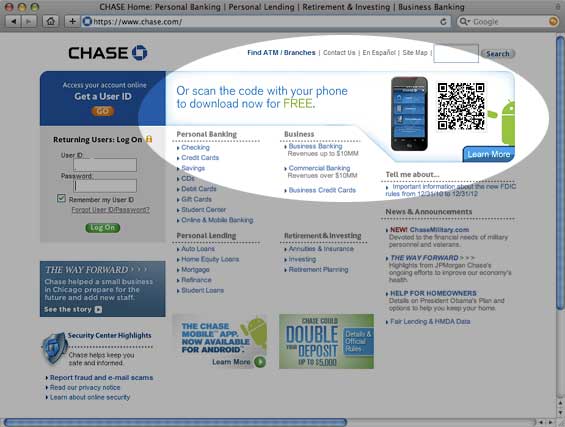 The retail banking sector continues to toy around with QR codes. For Christmas 2010, Barclays stuck a large QR code in the shape of a snowflake in the windows of its branches. Scan the QR code with your smart phone and it decoded to “Happy Christmas from all of us at Barclays.” However, the blue-on-blue treatment didn’t have enough contrast to work for some phone’s code readers. 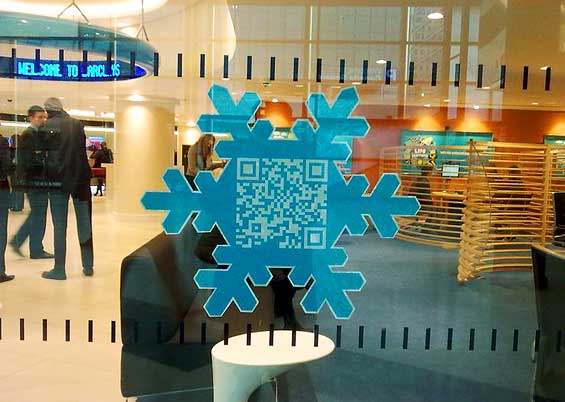 Visible Banking spotted this large banner on a BBVA branch in Austin, inviting passersby to become friends on Facebook. The copy reads, “Welcome to Austin, Facebook! Friend Request: We’d like to be your bank.” 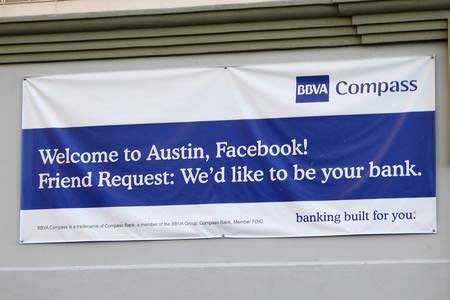 TFCU – Choose Your Style of Banking

TFCU has two websites to choose from, each with a totally different look but containing the same information. The choice is between the “corporate look” and the “Gen-Y look.” The Gen-Y site is a bright, colorful veneer applied to the corporate website. Using CSS, a financial institution could theoretically have unlimited “reskinned” versions of its website — one for each strategic target audience and/or promotion.

The amusing turn-of-phrase on this billboard for the Orange Savings Account helps reinforce ING DIRECT’s brand focus on thrift and value. 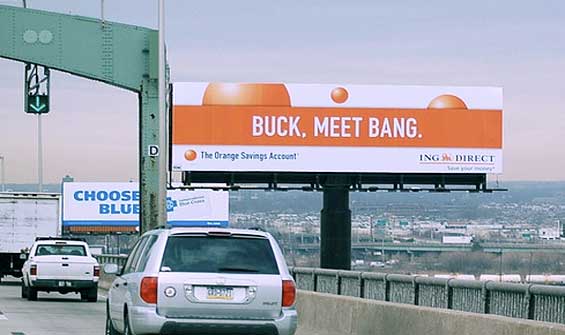 Remember that famous 70s song, “We’ve Only Just Begun?” Well, The Carpenters didn’t write it. Crocker Bank had an ad campaign designed to appeal to young newlywed couples, so they hired lyricist Paul Williams to write a song conveying the start of a new life in marriage. The Carpenters saw the Crocker spot on TV, called Williams, and had him turn the 30-second jingle into a full song. The rest, as they say, is history.

These print ads for ASB’s “Creating Futures” campaign gave up-and-coming artists, designers, typographers and illustrators the opportunity to get mass media exposure by “interpreting ASB’s manifesto.” The New Zealand bank used the style of adverting shown below until late 2010, replacing the approach with its “Hello” campaign. 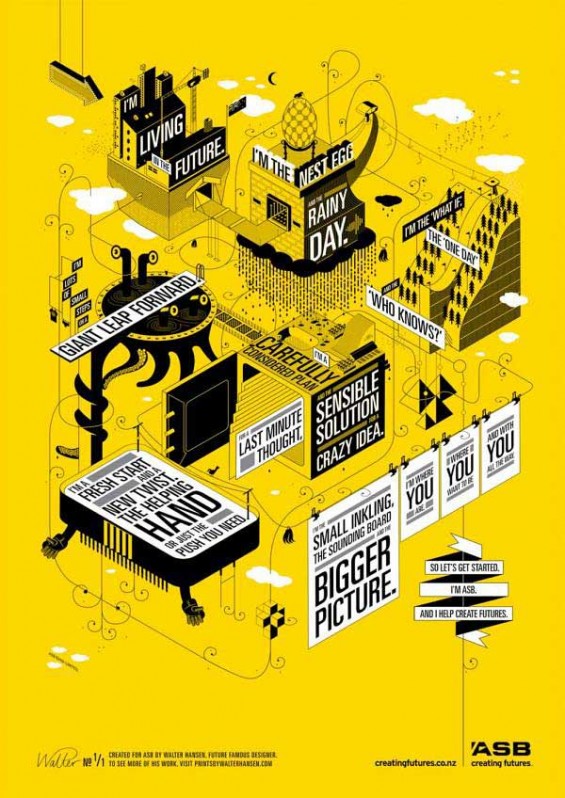 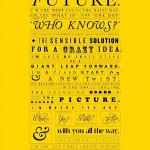 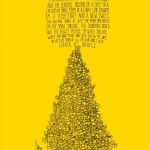 Frost Bank has never pretended to be anything but Texan. Their brand and its advertising are steeped in Texas culture. This TV spot shows Frost bankers arguing about the “right way” to BBQ — a holy tradition in Texas. The message: Frost’s staff are Texans first, bankers second. You can see a couple more good examples of Frost’s uniquely Texan ads here and here.

“Pork is not BBQ,” argues one banker. “I’m assuming everyone cooks it with the fat side up,” says another. Another banker disagrees, “Fat side down.”

This campaign for PNC uses 3D illustration and animates everyday objects to celebrate features of the bank’s online personal financial management tool “Virtual Wallet.” You can see two other spots in the series here and here.

The credit union’s new homepage design sports a clean and completely visual interface. It was developed by the web design team at Catapult Systems. 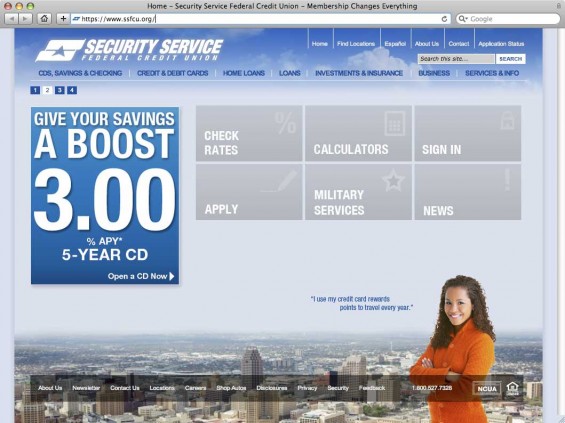 To celebrate the grand opening of a new “VIP Banking” location in Sydney, Westpac created these large posters for bus stop shelters near the branch. Ultra-luxury items including a yacht, limo and private jet are bent at 90° to convey the message that “VIP Banking” is right around the corner.

A hip-hop soundtrack plays underneath an announcer who says, “It’s a big, big country, so you need wheels. No matter who you are or where you work, you can find low rates and easy terms. Qualify soon, and we’ll throw in a free pair of fuzzy dice. That’s how we roll.”