Nearly half of all bank and credit union marketers admit they struggle to quantify the results of their efforts, and two-thirds say they need to be doing a better job quantifying marketing ROI.

Those are among the results of a survey fielded by The Financial Brand in early September, 2013. Roughly 80 financial institutions participated in the survey. Banks and credit unions of all asset classes participated in the study: 25% had over $1 billion in assets, 40% had less than $250 million and the rest fell in between.

For a general number, The Financial Brand recommends a marketing investment that is approximately equivalent to 0.1% of a retail financial institution’s assets.

Too Small, Too Big …and Just Right

Marketing Budget is Just About Right. Among those bank and credit union marketers saying their budgets were “just about right,” 63% were investing more than 0.1% of their asset size into marketing. Financial marketers who feel their budget is “just about right” allocate — on average — 0.0828% of assets to marketing, although the median is 0.1218%.

Marketing Budget is Too Small. Among financial institutions who feel their marketing budgets are either “too small” or “way too small,” 62% had budgets that were less than 0.1% of assets. The average investment in marketing in this group averaged 0.0446% of assets, with a median of 0.0882%.

37% of those saying their budgets were small were spending more than 0.1% of assets on marketing.

Marketing Budget is Too Big. Only two financial institutions in the study said their marketing budgets were too big, and both were credit unions. One with $940 million in assets had allocated $1.8 to marketing (0.19% of assets) — roughly double what you would typically expect. The other had $170 million in assets and invested a whopping $400,000 into marketing (0.24% of assets) — a level more common for credit unions that are 2-3 times their size. 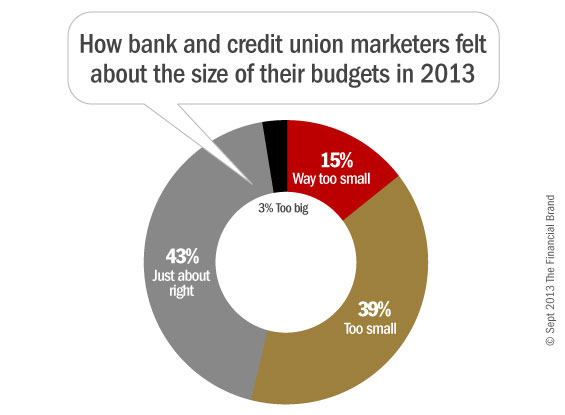 What Marketing Budget Items Do Management Teams Squabble Over

The Financial Brand asked banks and credit unions to tell us which areas of investment will spark the most questions and internal debate as they set their marketing budgets in 2014. 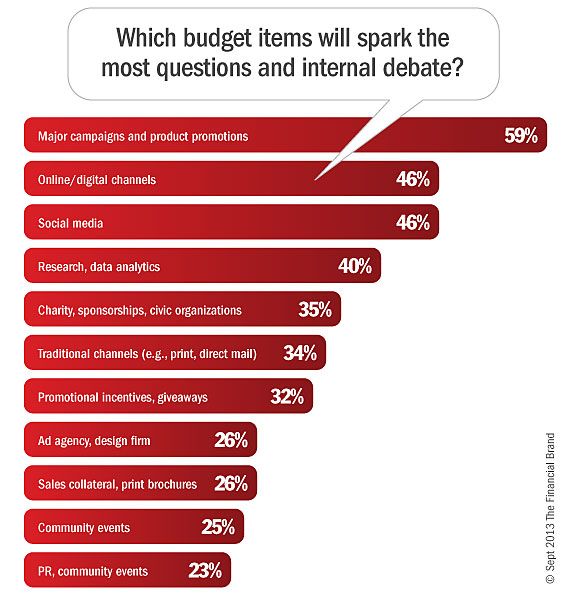 Financial marketers have always wrestled with how to prove the value of their work. Two-thirds of bank and credit union marketing professionals say they could do a better job establishing their ROI. And three out of every five confess that they only look at the most crude, basic metrics to measure marketing effectiveness. Only 15% say they have a good idea how much they get for their marketing investment, and a miniscule 6% consider themselves very sophisticated with their marketing measurements. 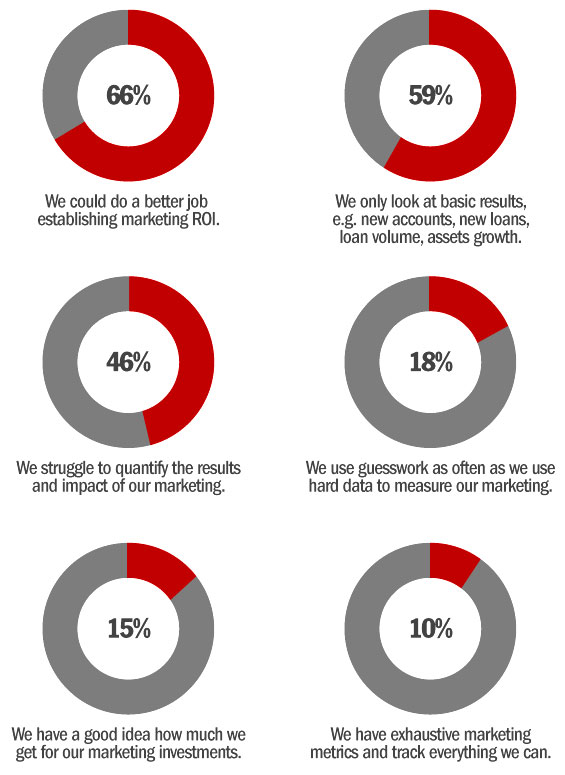 How Budgets Are Set

There are a few financial institutions that set their marketing budgets according to their strategic plan — a detailed plan based on corporate goals, branch/service expansion, market penetration, new products/services, community involvement, research, rate forecasts and media/channel mix. But this isn’t often the case. Indeed only a small handful of banks and credit unions say their budgeting process is strategic.

Most simply base next year’s marketing budget on what it was this year. Roughly one in three banks and credit unions give their budget a modest increase from the prior year, and any incremental spend above that must be justified.

There are quite a few financial institutions that go through the charade of strategic budgeting. They try to make the marketing department feel like they have some role and responsibility for budget-setting, when in reality they don’t. The budget is determined exclusively by the CEO and CFO at roughly 15% of all banks and credit unions. It is simply dictated as an edict.

One survey respondent summarized this phony process with sardonic insight:

“After all the meetings about goals, objectives and the importance our strategic plan… After re-stating how vital it is for us to grow, compete and take a leadership position… And after the marketing budget and action plans designed to accomplish these are developed and sweated over… The CEO and CFO get together, “slash & burn” then come up with a number they think marketing’s budget should be. Here… marketing is all about accounting!!!”

Many participants in the survey said they would go through the process to prepare a thorough plan, only to have the CEO and/or CFO come back and tell them what the final number was going to be, and that cuts would have to be made to hit that figure.

Many in the survey echoed similar grievances. “I get little to no input on the allocation amounts,” said one.” It is set by CEO arbitrarily, with no input from me, the marketing director,” confided another. “The CEO and CFO determined a number and gave it to us with little to no direction,” a third respondent explained.