Six years ago, Allegiance Credit Union based in Oklahoma City, became Third Degree Advertising’s first credit union client. Since then, the agency has helped dozens of other credit unions and state leagues. In addition to Third Degree’s work for Allegiance, you can check out their latest projects at their website.

Allegiance Credit Union, with around $200 million in assets, also has an educational blog and a Facebook page. 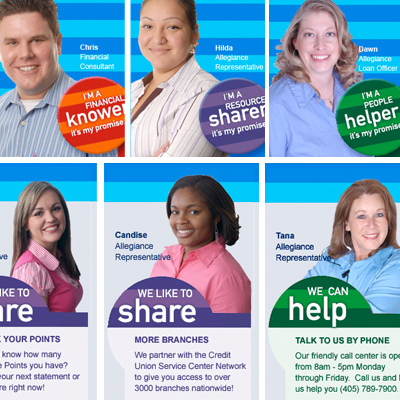 Allegiance People
A messaging series created by Third Degree Advertising, positioned Allegiance Credit Union
as being a really knowledgeable resource for members. The credit union made their own buttons
that each of their front-line employees wear. Employees get to decide if they are a “helper,” a “knower”
or a “sharer” depending on their personality type. 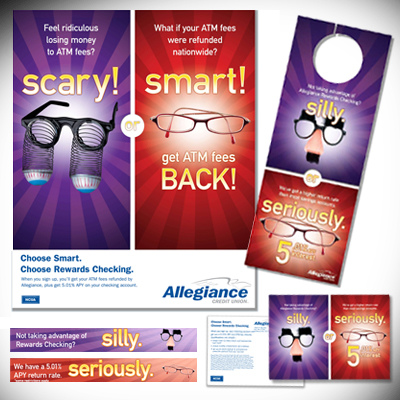 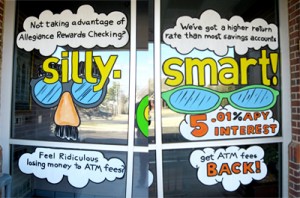 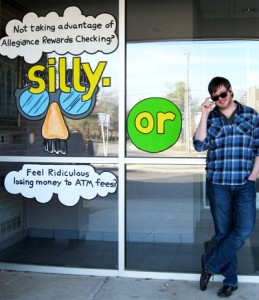 Window Merchandising
Allegiance hired a window artist to paint whimsical branch-front windows to feature the promotion.
The agency says it would have probably done things differently, but they seem cool with it.
Throwing some love to their client, Third Degree says it was a “perfect fit, and a really economical
solution” for a “fun, lively, friendly promotion.” 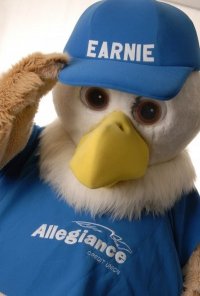 The Mascot
“Earnie the Eagle” is his name (note the clever tie-in to savings).
Earnie is the central figure — literally — in Allegiance Credit Union’s
youth outreach program. They’ve even created a special area in
their branches called Earnie’s Corner, designed to make “depositing
money a fun experience” for kids.