Regular readers of this blog know how much I detest the Net Promoter Score. Biggest management scam of the century in my book.

There are a number of reasons why I dislike the metric, including my contention that measuring intentions isn’t as useful as measuring behavior.

After all, I intend to lose weight, exercise more, eat right, stop smoking, work harder, be a better husband/father/work colleague, and make the world a better place.

In that context, FIs should track a new metric: Referral Performance Score.

The Math of the RPS:

Based on a recent survey of more than 1,000 US consumers conducted by Aite Group, I calculated the Referral Performance Score for Large Banks and Credit Unions (based on respondents’ indication of which type of institution they consider to be their primary FI).

The result is good news/bad news for credit unions, and bad news/good news for large banks. 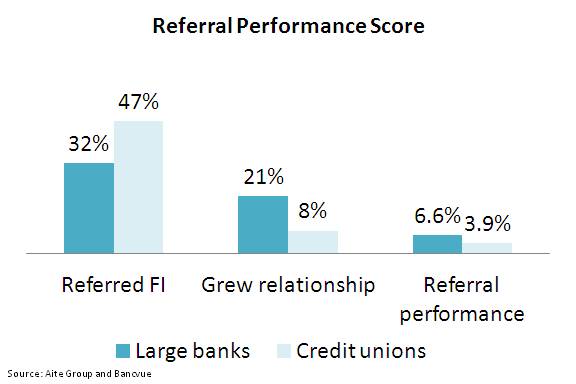 However: Among referrers, of those whose primary FI is a large bank, one in five grew their relationship with that FI (by increasing account balances and/or number of accounts). On the other hand, less than 10% of CU primary members that referred their CU grew their CU relationship.

Multiply the two percentages together to calculate the Referral Performance Score. A high RPS score means that a lot of people are referring AND growing their relationships.

While a lot of CU primary members refer their CU to family and friends, few of them are growing their own relationships.

In contrast, even though a smaller percentage of large bank primary customers refer the bank, a much higher percentage are growing their own relationship.

If I could do the research over, I’d ask respondents to be more specific about how many referrals they provided (but you, as bankers and creditunionistas should be tracking that already, right?). That would enable me to calculate a more robust relationship performance score.

The weakness in the current calculation notwithstanding, Referral Performance Score is far superior to the hokey-pokey net promoter score (put your left foot in, take your left foot, and shake it all around).