Thank UAE’s National Bank of Dubai for this one. They recently wrapped up a promotion: “Win 12 Times Your Salary.”

It’s simple. Transfer your direct deposit to the bank and you’re entered to win a year’s pay.

What a great idea. 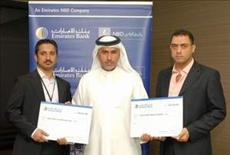 “We have exceeded our expectations and have managed to secure a record number of accounts,” said Mr. Jamal Bin Ghalaita, one of the bank’s general managers, about the promotion.

The bank gave away two grand prizes. Why two? Who knows. But look at these winners. They just won as much money as they make in a whole year! Are they pumped or what?!!?

Key Question: Did the bank get enough additional business to justify doubling up the giveaway?

It’s doubtful. One grand prize is probably enough to motivate the type of people who respond to these kinds of promotions.

Apparently, this isn’t the first or last promotion of this kind from the Dubai bank. They had previously held a “Win Your Car Free” auto loan promotion, and they currently have a “Live Free for a Year” loan promotion.