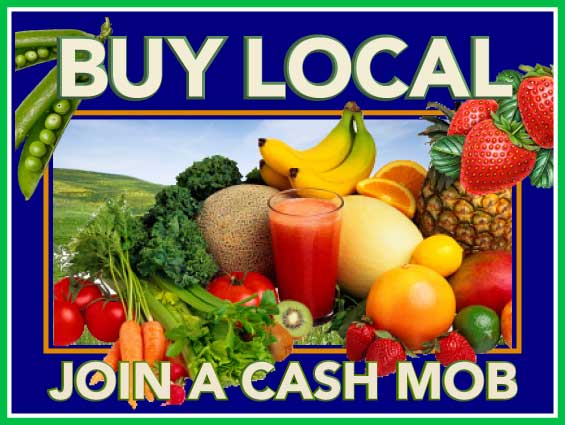 By now, you’ve probably heard of flash mobs — groups of people who descend on a predetermined location to do something unusual. There have been flash mob pillow fights for fun, and flash mob marketing stunts like Wells Fargo’s quasi-impromptu dance number in Times Square.

Cash mobs play off this idea. But instead of performing a song and dance routine, a group of folks get together and flood a local, independent business, each ready to spend about $20.

It’s the exact opposite of flash robbing, where a swarm of delinquents rush an unsuspecting retailer to clean them out. Cash mobs organize groups of people who commit to spending a few dollars all at one time at a local small business.

Cash mobs are a relatively new phenomenon. It’s an idea that’s only been around since about August 2011. The cash mob concept is credited to Chris Smith, a blogger in Buffalo, NY who used Twitter and Facebook to bring more than 100 people together at a local wine merchant. The store tripled its usual business for the day.

Smith says he got the idea after seeing the impact social-networking sites — companies like Groupon and LivingSocial — could have on small businesses.

Those who benefit most from cash mobs — small business owners — say the events have made the difference between a poor week and a fantastic week in nearly every case. Most store owners say cash mobs help double- or even triple their sales.

Sarah Ditzenberger, owner of Fischberger’s Variety, a gifts store in Milwaukee, says one cash mob that showed up to spend money at her store earlier this month boosted sales by $1,200, roughly doubling an average day.

Another small business owner had hoped for a couple hundred people to attend a two-hour cash mob scheduled for his establishment. Instead, he estimated 700-800 people showed up… and kept coming, with customers continuing to pour in over the following weekend.

Who Should Steal This Idea

The media is starved for stories celebrating small business victories, giving cash mob sponsor’s a huge PR opportunity. What better way could there be to position your financial institution as “local, just like the businesses and communities we support” than an event encouraging people to patronize neighborhood retailers? It’s a message the press will devour, and one big institutions can’t credibly deliver.

But promoting business loans and accounts isn’t the only reason to arrange a cash mob. Credit union advocate Tammy Holtzmeier thinks cash mobs can work for any community-based financial institution.

“Cash mobs are a strategic match for a credit unions, regardless of whether they offer business accounts,” says Holtzmeier, who maintains an online collection of articles related to credit unions and cash mobs.

Michelle McGovern, Chief Marketing & Development Officer for Firefighters Community Credit Union, agrees. “The basic foundation of credit unions were as grassroots institutions, so a cash mob is an absolutely natural fit,” she says.

What’s makes cash mobs so superior to other social media promotions is how easy they are. A typical flash mob, for instance, often requires paid performers and hours of rehearsals. But it doesn’t take a cast of thousands nor intricate choreography to make cash mobs work. Nor is there pressure to generate a massive quantity of Likes, fans, followers and tweets. You don’t need to “go viral.” Just a few dozen attendees and a cash mob can be a success.

If you get lucky and hundreds of people slam your cash mob event, you’ll have a PR bonanza on your hands.

And besides all that, cash mobs could be a lot of fun… and just an all-around nice thing to do.

2. Get permission first. This may seem obvious, but before you send hoards of shoppers to a local business, make sure they are okay with it.

3. Crank up your PR machine. The local media will love this story, so milk it for all it’s worth. Call news outlets and tell them what you’re up to. Talk to them about themes like “jobs” and “the local economy” and you’ll have them eating out of your hands. If you give them advance notice, they will likely send a photographer or camera crew. Make sure you have a designated spokesperson at the event to field reporters’ questions.

4. Microsite or Facebook page/app. You could create a destination page so consumers could easily find the schedule of upcoming cash mobs, as well as a sign-up form where small businesses could request a cash mob at their location. If you get a lot of businesses applying, then you could let people vote on which business they’d like to hit next.

5. Work with the mayor’s office. Every mayor has a vested interest in seeing local businesses succeed. You’ll find they are very receptive, and you’ll have an instant ally. If you cover the whole state, try working with the governor’s office.

6. Use social media. This kind of event is what social media channels were created for. Spread the word using Facebook and Twitter, and ask your fans and followers to do the same.

7. Send your employees. You can demonstrate your organization’s support for small businesses by encouraging staff to attend cash mob events. Make sure everyone who goes wears corporate apparel. You may even want to create a special team of employees to work cash mobs, in which case you could make special branded t-shirts.

8. Marketing materials. If you push a cavalcade of new customers to a business, there’s nothing wrong with asking the business owner to put out a few brochures or flyers, maybe for a few days or a week, but certainly for the cash mob event itself. Just don’t overdo it.

9. Parking and security. If you’re worried about a crush of attendees flocking to your cashmob events, you may want to plan ahead. Make sure there is adequate parking, and think about hiring an off-duty police officer if you anticipate more than 100 people showing up.

10. Two for one. If you can find a small business near a restaurant, café or brewpub, you can shift the crowd over to this second location for socializing afterward.