Less than half of the public trust banks to do what is right, making financial services the world’s least-trusted industry for the second year in a row, according to an annual survey by public relations firm Edelman. 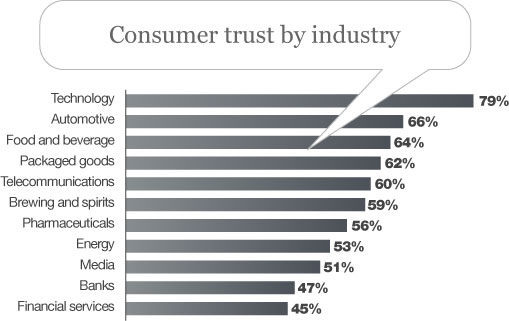 The study, conducted by research firm StrategyOne on behalf of Edelman, involved 20-minute online interviews with 30,000 people in 25 countries. Edelman describes participants in the survey as members of the “informed public” — college graduates whose household income is in the top quartile for their age, and who follow newsworthy issues several times a week.

Consumer Confidence in Banks Nosedives in US, UK

Since 2008, consumers’ confidence in banks’ ability to “do the right thing” has plummeted — a stunning 46% in the US, and an equally-shocking 30% in the UK. Meanwhile, in other markets like India and China where consumers already have high levels of trust, faith in financial firms’ integrity has increased as much as 12% over the same three-year period. 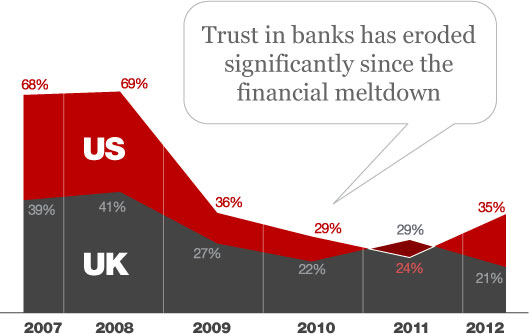 Respondents ranked “has ethical business practices” (76%), “listens to customer needs and feedback” (74%), and “places customers ahead of profits” (73%) as the most important actions financial firms should take to rebuild trust.

Edelman says the concepts of trust and reputation are inseparable. A financial institution’s reputation (i.e., its brand) is a consumer’s aggregate feelings about its past behaviors. Past performance creates future expectations, which in turn determines the degree of trust a consumer places in an organization.

The Financial Trust Barometer, now in its 12th year, seals Edelman’s position as one of the world’s foremost authorities on reputation tracking in the banking sector.

Trust in Banking by Country

Consumers in the U.S. are more trusting of financial services brands than many other developed countries, however, the industry is only trusted by a majority of consumers in nine of 25 countries studied. 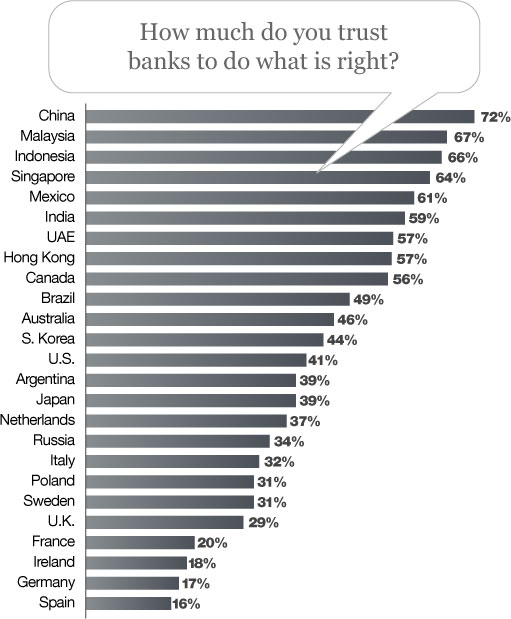 Food For Thought: How many financial institutions have the word “Trust” in their names?

A report released earlier this year by consulting firm Oliver Wyman found that 63% of people trust no one but themselves to manage their retirement savings. Banks were trusted by less than 8% of those surveyed in the U.S. and U.K.

In order to regain trust, banks will have to offer simpler products that appear to offer value for money, according to the Oliver Wyman study. To do that, lenders and insurers will probably cut one-quarter of their costs over the next eight years by delivering products online instead of through branches.

Do What You Say, Say What You Mean

“The financial crisis and its persisting issues of banker bonuses and sovereign debt defaults have highlighted issues of moral bankruptcy in our current way of banking,” observes Omar Shaikh, executive board member of the Islamic Finance Council UK.

Richard Edelman, President/CEO at Edelman Worldwide, says there has too often been a divide between what financial institutions do and what they say. “It is not good enough any more to say smart words. You have to have smart deeds.”

Martin Shaw, chief executive at the Association of Financial Mutuals, says banks frequently respond to breakdowns in trust by throwing money at new branding projects. “But actions inevitably speak louder than words,” he says. “But all too often you hear that customer benefits are cut, whilst the [shareholder] dividend is increased.”

Branding guru Steve Davies says trust is born from a sense of congruity. “Put simply, ‘saying what you will do, and then doing what you say.’”

That doesn’t mean you have to open the kimono and be brutally honest, Davies says.

“Transparency is a term that’s sometimes overused,” he complains. “It doesn’t mean opening the doors and revealing every secret. The simple reality of doing business makes telling the truth an unrealistic proposition.”