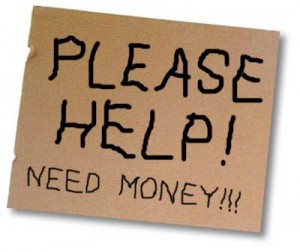 For many years, credit unions have lobbied hard to make sure they get fair and equal treatment from the U.S. government. But begging the Treasury for TARP money is not a good idea.

CUNA, NAFCU and Fryzel at the NCUA have all joined together recently with their hands out as they ask for taxpayer relief. Each time they do, it undermines all the positive press credit unions have been getting (as reported by The Financial Brand here, here and here).

Key Question: Exactly how big is this problem? How many credit unions out there were engaged in risky lending practices that now leave them in such a vulnerable state that they need a bailout?

After weeks and weeks of mainstream media articles touting the safety, security and soundness of credit unions, why would credit union industry leaders want to come out with a “we-need-a-bailout-too” message? Are they willing to gamble the entire industry’s image just to make sure they get the same treatment as big banks?

Reality Check: If credit unions need a bailout, then they are contradicting claims that they are run differently than banks.

Big banks have made it tough for everyone in the financial services industry, for sure. And maybe the imposition on credit unions is so great that they actually need some relief. But if that’s the case, then this assistance should be directed at all credit unions, and not just used to create relief mechanisms for those who put themselves in jeopardy.

And if credit union associations feel that injecting capital into conventional banks is a misuse of TARP funds, then they should be lobbying Congress and the Treasury to have that money returned to the taxpayers — not begging for their “fair share.”

Bottom Line: If credit unions get TARP money, they are taking a powerful arrow out of their quiver and handing it to banks who will fire it right back at them.

If there are credit unions out there with “toxic assets” due to subprime mortgage practices, then they should take their lumps as quietly as possibly and not drag the entire industry down along with them.