Subscribe Now Get The Financial Brand's FREE Email Newsletter
Retail financial institutions face a nasty decision: How to raise fee income without driving customers away. But consumers aren’t completely inflexible. Some are willing to make give-get compromises. And surprisingly, half of all consumers say they’d prefer paying for their banking services on an à la carte, pay-as-you-go basis -- one transaction at time.

A survey from the Deloitte Center for Financial Services finds that almost half of all consumers would consider paying 25 to 75 cents for each transaction, as opposed to the traditional flat monthly fee models that most banks and credit unions currently utilize.

48% say they would prefer this a la carte approach — more than twice as many who prefer the second-place option, a fixed monthly fee set between $15 and $30. Consumers say this preference reflects their preferences for total transparency in account and service pricing. Four other potential pricing models drew limited interest from consumers. 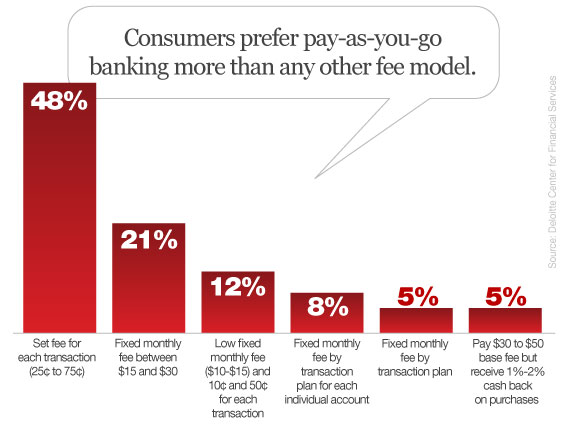 “Retail banks’ free checking model has been withering away since 2009, and margins continue to erode,” said Jim Eckenrode, the executive director of the Deloitte Center for Financial Services. “The question now becomes how banks move away from the free model, which a number of other industries have struggled with and often to the detriment of customer relationships.”

Consumers seem open to a range of new pricing and service models in exchange for reduced fees. For example, 40% of survey respondents expressed interest in a digital banking plan that would offer reduced fees while providing a limited level of in-person services (note: banks have tried this before with little success).

High balance requirements were relatively more popular among older respondents, and a discount for favorable social media activity was the most popular option among the youngest respondents.

Consumers Threaten to Defect If Faced With Fee Increases

The survey revealed that there is considerable aversion to price increases, with many consumers believing that banks are not being fair in raising fees (a revelation that should come as no surprise to financial institutions like BofA).

BofA’s $5 Monthly Debit Fee: The Backlash, The Fallout and What It All Means

What's more, consumers say they will switch banks if fees are increased on existing services, with nearly one in four consumers surveyed (22%) saying they would “definitely” jump ship over a fee increase of only $5. Another 36% said that such a move would “probably” cause them to do the same. If banks tried increasing monthly fees by $10, the number of potential defectors shoots way up. 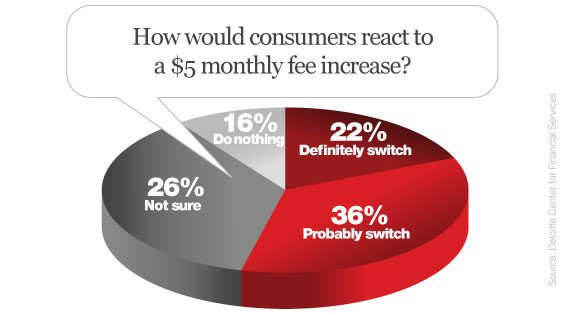 Deloitte says no matter which route a financial institution chooses -- “free checking” or fees -- the most important piece of the fee income puzzle is communication and transparency with consumers.

Interestingly, differences in price sensitivity and industry perceptions appear not to be driven by demographics, but largely by individual experiences and beliefs.

Through statistical cluster analysis of the data, Deloitte identified three distinct groups of bank customers emerge: Loyalists, Frugalists and Distrusters. These groups are distributed along two broad axes: willingness to pay and perceptions of banks.

Financial institutions need to rethink their approach to fees through the lens of customer segmentation, accounting for differences in perceptions and price sensitivity among consumers. Does that mean you could end up with three different checking accounts and three different pricing models? Perhaps.

Consumers Clueless About What It Costs Banks to Provide Checking Accounts

More than one-third of consumers surveyed had no estimate of the cost that banks incur to service their accounts. One in five (18%) think it costs less than $1 per month, and nearly 9 out of 10 (87%) think it costs $10 or less. Industry estimates place the average somewhere around $250 and $300 a year. 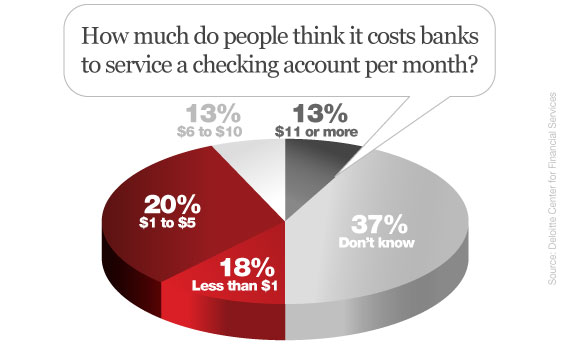 Reality Check: Financial institutions have done a lousy job communicating the costs associated with providing checking services. If banks and credit unions want to charge a fair price, they have a lot of work ahead of them educating consumers who generally think they are "giving banks their money who are making millions off it, so they shouldn't have to pay a dime."

Consumers Think Banks Are Greedy... And They’re Okay With That

But just because consumers think banks are greedy and self-serving doesn’t mean that they aren’t satisfied with the services provided. In fact, quite the opposite. According to Deloitte’s research, three out of four consumers (74%) say they are either “satisfied” or “very satisfied” with their primary bank.