Subscribe Now Get The Financial Brand's FREE Email Newsletter
Credit unions can’t even keep pace with population growth in Canada. Members are getting older. And that tax exemption? Gone.

Early in 2013, Credit Union Central of Canada published its annual report on the health of the country’s credit union system. While the organization understandably tried to put a happy face on the data, much of the information contained in the study paints a less rosy picture.

There are many similarities in the ways that Canadian and U.S. credit union systems have evolved, and the issues they now face: member growth, an aging membership, loss of special tax status… and big credit unions get bigger while small ones struggle for survival. But the impact of these issues seems to be more pronounced in Canadian credit unions.

Should credit unions in the U.S. interpret the turmoil in the Canadian credit union industry as an accelerated and exaggerated prophecy for rough times ahead? Is Canada foreshadowing the future for American credit unions?

According to census data, Canada’s population grew by 5.9% between 2006 to 2011. During the same period, the combined credit union/caisse populaire (Desjardins) system recorded a 0.8% decline (85,700) in membership between. When the Quebec and the Desjardins system are excluded, membership in credit unions in the rest of Canada increased by 2.8%. 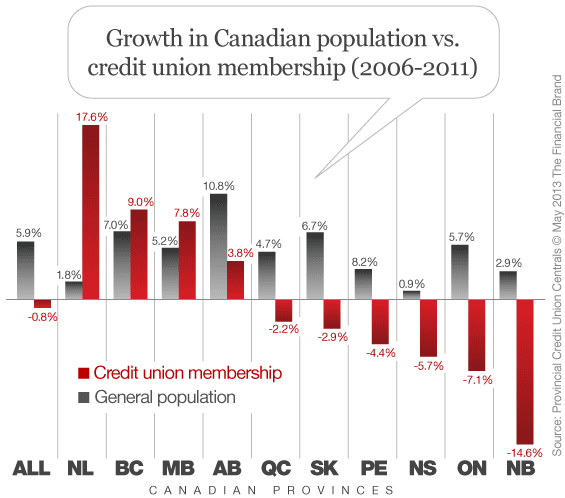 Alberta, Manitoba, British Columbia and Newfoundland & Labrador were the only provinces reporting gains in membership between 2006 to 2011. The remaining provinces all experienced a decline in membership during that period.

Surprisingly, a separate study revealed that about two-thirds of Canadian credit union members were women, when the Canadian population is generally evenly split between males and females. Credit union members also have more money and more education than the average Canadian. 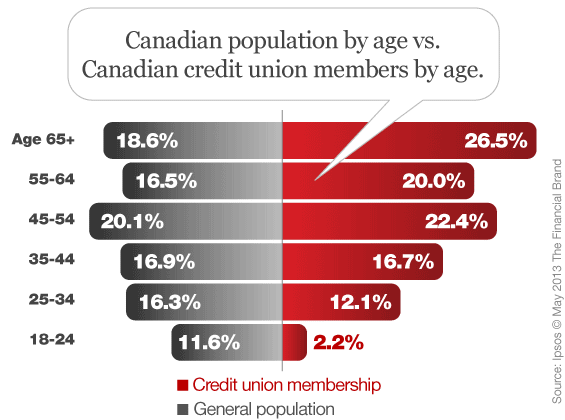 Read More: How Much Do Credit Union Marketing Executives Make?

The Canadian government made the surprise announcement in March that a tax deduction extended to credit unions would be phased out over the next five years beginning in 2013.

“We were surprised that Budget 2013 targets credit unions in this way,” said Gary Rogers, VP of financial policy with Credit Union Central of Canada, said in a statement.

The deduction has been in place for 40 years. It will decrease by 20% starting in 2013, until it is eliminated in 2017, sticking credit unions with a higher tax bill.

Credit unions across the country expressed outrage at the proposal. Some argue that the government’s decision comes at a critical time in the country’s ongoing economic recovery. And for smaller credit unions the timing couldn’t be worse; the increase in their tax rate comes at the same time when operating margins are being squeezed as regulators are looking for increase capital to be held. Canadian regulators were likely aware of this before making their announcement, so protests probably aren’t going to phase them much if any. Hey, if they think they need the money, what can credit unions do about it?

According to the budget record, the tax break costs the government an estimated $47 million in 2012, although that amount has been declining over the years.

Assets Grow, While the Number of Credit Unions Dwindles

From 1992 to 2011, the number of credit unions fell by 726, or at an average annual loss of about 36 credit unions (or roughly 3.6%). System assets on the other hand nearly quadrupled during this period, with an average increase of approximately $5.2 billion per year.

The Financial Brand has forecast that the number of credit unions in the U.S. could drop below 4,000 twenty years from now, if the current rate of decline continues.

Have the Number of Credit Union Branches Peaked?