Subscribe Now Get The Financial Brand's FREE Email Newsletter
Thousands of Americans are using the Consumer Financial Protection Bureau’s public Consumer Complaints Database to file disputes with their banks. Here's a breakdown of the 19,000 grievances consumers have lodged against their banks and credit unions since the database was created.

A report from the US PIRG Education Fund analyzes consumers’ complaints and the banks were the worst offenders, breaking the data down state by state. The report, “Big Banks, Big Complaints: CFPB’s Database Gets Real Results for Consumers,” focuses specifically on the complaints consumers have about bank accounts and services.

Since the database for banking was launched in March 2012, the CPFB has recorded nearly 19,000 complaints by consumers. 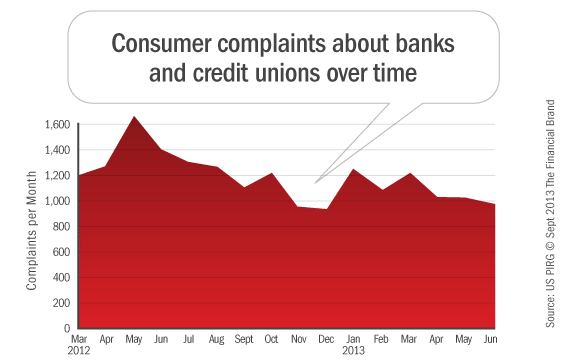 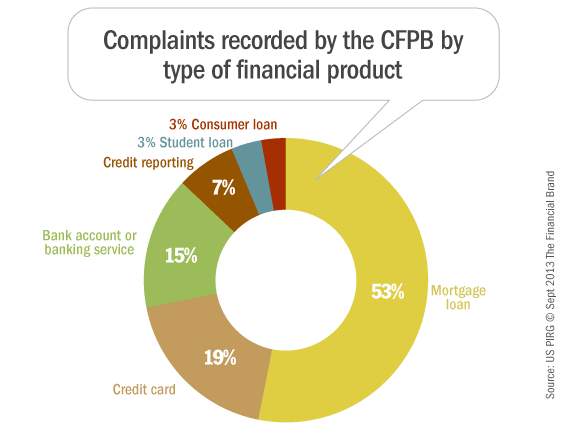 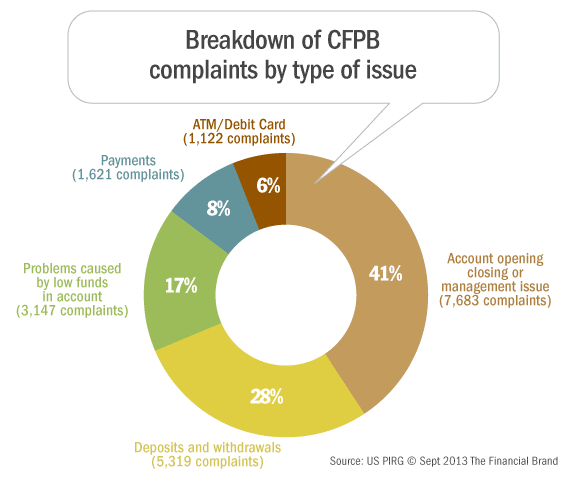 Banks With the Most Complaints

Twenty-five U.S. banks account for more than 90% of all complaints to the CFPB.

TCF National ranked first for complaints-to-deposits ratio for complaints related to checking and savings accounts, as well as in all five issues tracked by the CFPB.

Several banks scored poorly in multiple banking service categories. Sovereign and Capital One, for example, ranked in the top 10 for highest complaints-to-deposits ratio across all four major banking services: checking, savings, CDs and “other” services. Capital One also had big issues with account management, deposits/withdrawals, low funds, making/receiving payments, and the use of ATMs or debit cards.

Rank of Complaints-to-Deposits Ratios by Service

Rank of Complaints-to-Deposits Ratio Within Issue

Vermont had the worst complaints-to-deposits ratio in the U.S.

How Banks Are Responding

While banks respond to 95% of complaints, approximately one in every five resolutions is still disputed by the consumer.

Bank responses to complaints vary based on the issue raised by the complaint. Nearly half of all complaints related to an individual’s funds being low were resolved with monetary relief, compared with 28% of all complaints. Low funds issues include overdraft fees, non-sufficient funds fees and bounced checks.

More than one in four complaints about banking services processed by the CFPB ended with the consumer receiving some form of financial relief. The CFPB says it has helped more than 5,000 consumers receive monetary compensation as part of their resolution. The median amount of monetary relief was $110.

Roughly 1,000 consumers had their complaints resolved with some form of non-monetary relief, such as a bank contacting a credit bureau to request a change in a credit report.

Banks vary in the degree to which complaints are resolved with monetary relief. TCF National responded to more than half of all complaints with offers of monetary relief, compared to just 4% of responses by New Orleans-based Whitney Bank.

TCF National had the highest ratio of disputed responses to deposits, followed by Sovereign and Capital One.

Read More: Is Your Call Center Up to Par?

Could the Complaint Database Be More Useful?

To make the public database more useful to consumers, the report from US PIRG also discusses several changes that the CFPB could make, such as developing a mobile app for consumers. US PIRG also says the CFPB could make the Consumer Complaint Database more user-friendly by adding — among other data — more narrative and detailed information about consumers’ complaints, including how they were resolved, the reasons for any disputes, and how those disputes were resolved.

Another recommendation is to expand the CFPB database to include discrete complaint categories for high-cost credit products such as payday and auto title loans, and prepaid cards.

You can download the entire 54-page PDF report, “Big Banks, Big Complaints: CFPB’s Database Gets Real Results for Consumers,” here at the US PIRG website (instant download, no registration required).