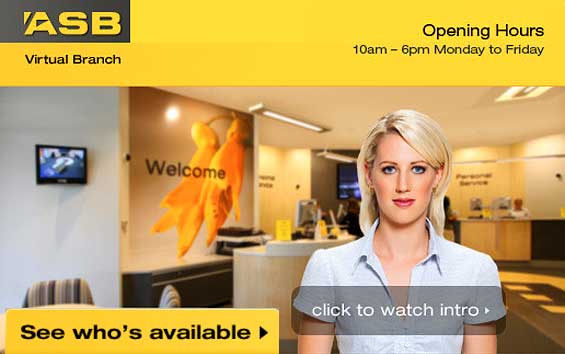 ASB has its Virtual Branch set as the bank’s Facebook homepage, so every visitor is greeted with a giant banner promoting the app. A attractive-but-nameless “concierge” offers to give you a tour. (The Financial Brand has been told the greeter is indeed a real person and not an avatar, despite that her simulated mouth movements look a bit awkward.)

The Virtual Branch then gives you a menu of photos of real ASB staff — eight employees based at the bank’s Auckland Support Centre — each tagged as either unavailable or available. Clicking on an available “teller” initiates a chat dialogue.

“We’ve had up to six Virtual Branch banking specialists available at any one time and we can change staffing levels depending on the number of customers in our Virtual Branch throughout the day,” said Michael Ramsay, Acting General Manager Internet Banking.

“We have noticed peaks of activity at certain times,” added Ramsay. “For example after the Christchurch earthquake in New Zealand when some of our physical branches were closed, some customers turned to our Facebook branch as an alternative way to engage with us.”

The team of eight Virtual Branch specialists are currently focused on Facebook only, however have the ability to handle more than one chat per session if demand requires it. There is another team that works on ASB’s Twitter account. Currently, the eight service Virtual Branch agents don’t have any sales targets.

What are the questions the Facebook reps typically hear? Customers will ask about everything from advice on a home loan, how to change money for an overseas trip, setting up automatic payments, or what to do about a stolen credit card.

ASB says it feels confident that its two-way chat system is both private and secure.

The Virtual Branch application is available to anyone — not just bank customers, wherever they are in the world. Users have come from countries spanning the globe, including the US, UK, the Netherlands, Brazil, Israel and Poland.

When the virtual branch is closed, customers can send a message via secure email through the bank’s online banking system or call the service center.

What do ASB’s Facebook reps do during down times when no one is queued up to chat? The bank wouldn’t say. 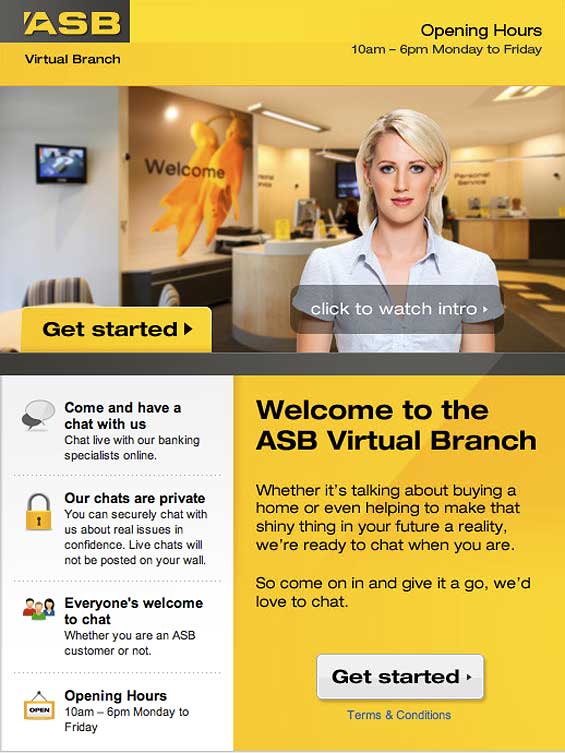 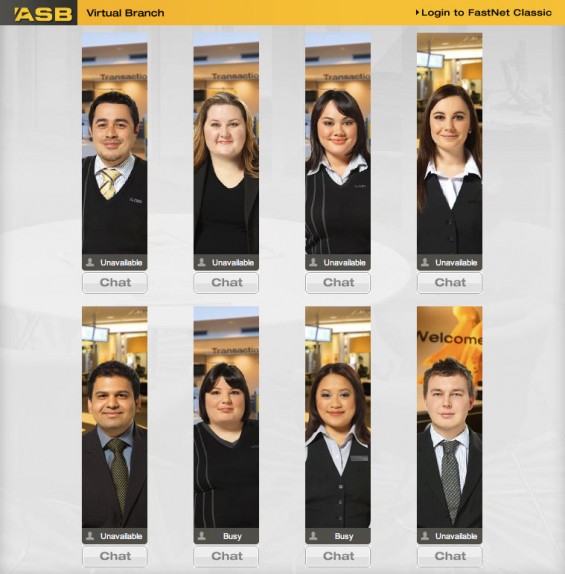 8  SERVICE REPS TO CHOOSE FROM
Photos only. No names. 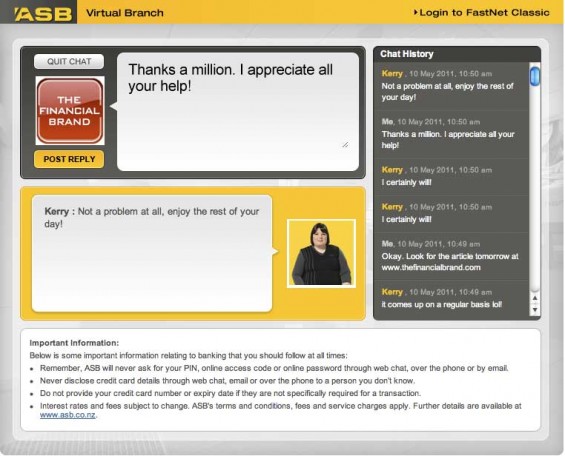 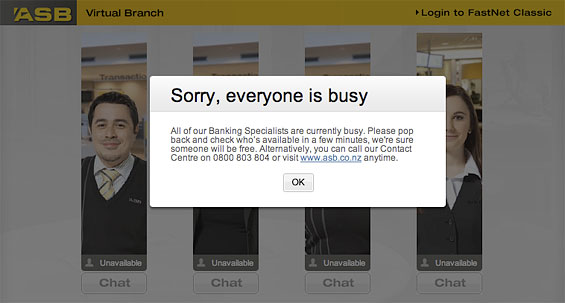 ALL AGENTS ARE BUSY

This is the message you see when no service reps are available at ASB’s Virtual Branch. There should be a queue (“Add me to the wait list”), or at least a timer letting users know how long the average wait times are. 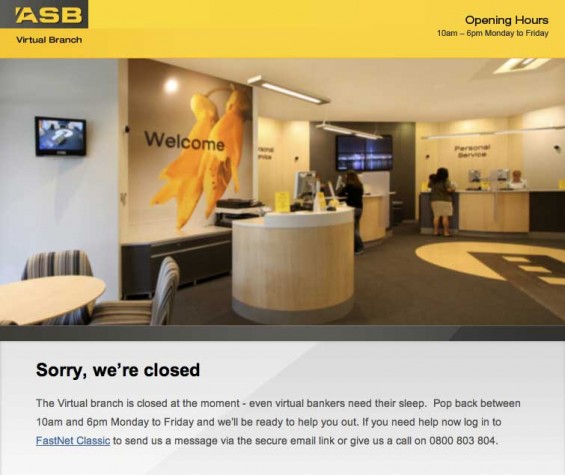 Initially, ASB launched its Virtual Branch on a trial basis to gauge customer interest, with the pilot scheduled to run through December 2010.

When discussing the bank’s Facebook strategy in an interview with Visible Banking, Simone McCallum, Head of Internet Community Support & Operations at ASB, said they were curious whether customers were interested in talking to their bank through social media, and if so, what kind of questions they might get. So the bank chose to jump in, test the water and see how things would play out.

Four months into the experiment, at the beginning of the year, ASB conducted a strategic review of their Facebook initiative. One of the changes they made was to the Virtual Branch’s hours of operation. When it debuted, the Virtual Branch was open from 8 am to 9 pm, seven days a week, but hours were reduced to 10 am to 6 pm, Monday through Friday.

Within its first few weeks, ASB had amassed some 2,500 “likes.” By November 2010, that number had grown to 12,500, and today, the bank’s Facebook page has 16,405 “likes,” with the majority choosing to install the Virtual Branch application.

By comparison, ASB has over 2,800 followers on Twitter, where the bank has had an account since February 2009.

ASB has over NZ$60 billion in assets (nearly USD$50B) and 1.2 million customers, so the bank is reaching a little more than 1% of its base through Facebook vs. 0.2% on Twitter.

At the time ASB hatched its Facebook plan, a spokesperson said the app reflected the bank’s “One Step Ahead” slogan, positioning ASB as a progressive, advanced financial institution. (The tagline has since changed to “Creating Futures.”)

Presently, ASB does not provide live online chat anywhere except Facebook. It’s a bit surprising that the bank would prioritize a Facebook app over a live chat feature on its website, especially when so much of its brand is built around a personal, one-to-one style of service. ASB’s homepage even sports a giant “Hello,” even though there’s no one to talk to.

Working in with marketing and branding agency Wag the Dog, ASB put together a Facebook campaign to stimulate adoption of its application. They ran a series of six different Premium Engagement Ads from September 8th to October 31st, 2010. The creative was designed to fit with ASB’s brand characteristics and its previous advertising campaigns: quirky, irreverent and funny.

“We found that people tend to interact more with the lighthearted and slightly quirky ad content on Facebook,” said Deborah Simpson, GM/Brand & Marketing at ASB.

The ads were broken down into three sets, each with a few creative variants: one promoting ASB’s presence on Facebook, one advertising a laptop give-away and one introducing the Virtual Branch application.

ASB wanted this campaign to reach a broad audience and make an impact across the New Zealand market. The company took advantage of Facebook’s aggregated data to target users over the age of 18 and kept the geographic targeting open to the whole of New Zealand. The campaign received over 6.5 million impressions during the campaign period, in a national market of 4.2 million consumers.

When ASB launched its campaign, the goal was to gain 11,000 fans for its Facebook Page in six months. Within three months, ASB had gained an average of 300 new fans every day and reached over 13,000 fans, surpassing the original objective in half the time. With its current fan base, ASB can theoretically reach over 2 million people through connections with those who have “liked” the bank.

ASB asks users of the Virtual Branch if they would be willing to share their thoughts in an exit survey. The 12 ranking questions designed to gauge customer reaction to the Facebook app include:

ASB says that 99% of those completing the survey would refer the Virtual Branch to a friend or family member.

“Facebook remains an important channel for communicating with our customers, and we are constantly taking customer feedback on board as we develop our Virtual Branch,” said ASB’s Ramsay. “We are working on some changes to the Virtual Branch over the next few months, so watch this space.”