Subscribe Now Get The Financial Brand Newsletter for FREE - Sign Up Now
The proposed new name for the BB&T and SunTrust combination is turning out to be more of a piñata than a trial balloon, at least on social media. The negative views over the aspirational name poured in quickly from consumers and others. Branding experts split more evenly. Adding to the drama: Truliant Federal Credit Union has sued the banks for trademark infringement.

One thing’s for sure. If you launch a rebrand of a big public company, you’d better have very thick skin — and deep pockets. Just a quick glance at social media would suggest to many people that the top management and branding executives at BB&T and SunTrust must be clueless, illiterate, hapless, and wasteful for proposing renaming the pending combination of their two big regional banks Truist Financial Corp.

The online reaction was overwhelmingly negative. A few of the literally hundreds of zingers:

Well, you can’t please everybody, right? And social media makes everyone an instant brand expert. Sure, you could dismiss the whole backlash as the rantings of people spending too much time on digital devices. However, the pushback wasn’t only from anonymous consumers. The professional branding and marketing cadre weighed in extensively on the new name as well.

Could Truist Get Nixed By All The Negatives?

While the pros’ views were more evenly balanced, some cited earlier rebranding disasters, including the widely mocked “Tronc,” Tribune Publishing’s rebrand (which stood for Tribune Online Content). “Sounds like a Millennial falling down the stairs,” was how The Verge described it at the time. The company eventually reverted back to its original name.

Could the same happen with “Truist”? It’s certainly a possibility. The merger itself, first announced in February 2019, must be approved by shareholders. In addition, the new name will be voted on by BB&T shareholders, the company said. No reference was made to SunTrust shareholders. 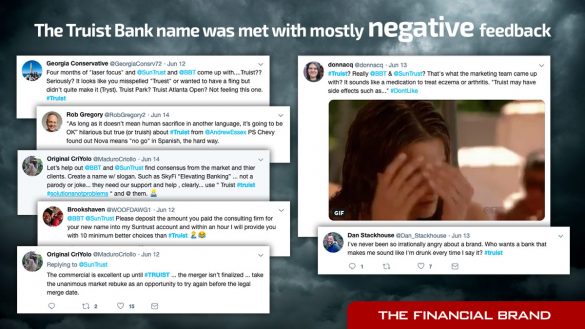 Further stirring speculation about the future of “Truist,” the companies in their name announcement did not unveil a logo. The press statement says: “Additional brand elements … will be revealed at a later date.” The merger, if approved by shareholders and regulators is expected to close in the third or fourth quarter of 2019, the company says.

Another potential roadblock popped up the week following the announcement of the Truist name when Truliant Federal Credit Union, based in Winston-Salem, N.C., where BB&T is headquartered, filed a lawsuit against BB&T and SunTrust over the Truist name. The lawsuit states the civil action is for trademark infringement, false designation of origin and unfair competition arising under the Trademark Act of 1946, according to the local NBC affiliate.

Several financial marketing experts feel that SunTrust is a great name and should have been the surviving name, in the same way that Norwest opted to use the Wells Fargo name when it acquired the California-based bank, and why Nationsbank kept the Bank of America name.

“The BB&T acronym is an obvious dud,” says Sam Kilmer, Senior Director at Cornerstone Advisors, on LinkedIn, “but they’re wasting away a great name they could grow with in SunTrust. … Why buy the baby name book and argue?” Kilmer ascribes “Truist” to “merger egos, corporate mumbo-jumbo, and make-work.”

Two Names That Couldn’t Be Glued Together

Several observers point out that the merger is positioned as a merger of equals, which makes it tough to simply drop one of the two names, especially SunTrust, which has a very strong presence in Atlanta. Inevitably, “MOEs” lead to a lot of compromises and splitting up of titles and positions. Often the names get combined in some fashion, as with JPMorganChase, or … SunTrust (the 1985 combination of SunBank and Trust Company of Georgia). But in this case that option didn’t work. So they decided to ditch both names in favor of something new to carry them forward.

SunTrust CEO, Bill Rogers, who will be President and COO of the combined company, said at the Bernstein Strategic Decisions Conference that “every combination of SunTrust and BB&T you can imagine” was tried. He said further that he and BB&T CEO Kelly King, who will be CEO of Truist until September 2021, were willing to give up the names of the institutions where they had spent their entire careers.

So they agreed to come up with something new and hired Omnicom Group’s Interbrand unit, a brand consultancy, to help them come up with a name. A video on the interim Truist website has 11 executives from the two banks and Intercom explaining the name development process. 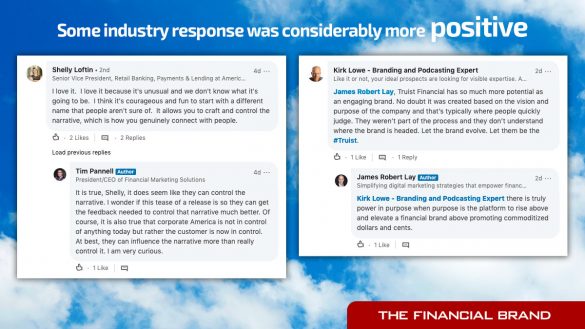 If you sift through the corporate speak, you learn that the agency used gamification with employee teams from both banks — what Interbrand Director of Verbal Identity Tori Miner calls the “More Than a Name Game.” Employees were shown cards with various images along with attributes written on them including: “Fast, Traditional, Siloed, Human, Structural, Bold, and Calm.” SunTrust CMO Susan Johnson says there were 16 different attributes that ultimately were winnowed down to four.

The bank says the Truist name reflects the heritage of both companies. “Truist will reflect what we stand for — a shared belief in building a better future for our clients and communities,” says King in a statement. Rogers adds that it also represents serving “our clients as a true financial partner.” BB&T Director of Marketing Kim Moore-Wright says the name has to “signal to the future … where we need to be as an organization.”

The critical comments from marketing and branding experts were not as numerous as those from consumers, but more in depth. Here are some of the most interesting.

“Authenticity really matters… The Truist brand is sort of this aspirational, amorphous thing — you could put this on a brand of toothpaste.”
— Peter Atwater, Financial Insyghts

“We’re living in a time where authenticity really matters,” says Peter Atwater, President of Financial Insyghts and a former banker, speaking with CNBC. “We want things that are tangible… the Truist brand is sort of this aspirational, amorphous thing — you could put this on a brand of toothpaste as much as you could put it on linoleum.” Atwater thinks SunTrust is the better brand, adding that the two banks “have thrown aside two great brands that had real value in exchange for this horrific, means-nothing statement.”

• “This name is a real stretch. A poor example of board room negotiations and decision. I think this is a ‘settlement name’ vs. a strategic step forward for a new bank and brand.” — Bruce Clapp, President, MarketMatch

• “I can’t believe they would launch a name without a website associated.” — David Kreiman, EVP, Glenview State Bank

Thumbs Up For The Truist Name

The chorus of boos is pretty loud for Truist, but there are plenty of believers, too. One of the most cogent views comes from James Robert Lay, CEO of the Digital Growth Institute.

“It would have been easy to stay the course and keep one of the legacy brand names,” Lay says on LinkedIn. He applauds the two bank’s leadership teams “for making the tough choice so many leaders simply lack the courage to make.” He also believes it’s a smart move to break free from the legacy past, because “the majority of people simply don’t trust banks today.”

“The biggest opportunity I see is positioning Truist Financial as a digital-first brand built around people … supported by insights and guidance provided by data.”
— James Robert Lay, Digital Growth Institute

Lay cautions, however, that the two big banks have “taken on the tremendous role of branding around trust which can pay off huge if they craft the narrative beyond their brand and focus on the needs of people … or it can bring them down if they fail to deliver on the promise.

“The biggest opportunity I see out of all of this is positioning Truist Financial as a digital-first brand built around people that are supported through the insights and guidance provided by data.”

• “If Truist was a startup, I guarantee the haters would feel differently. As a bank marketing and sales veteran, I think Truist could win in the end. With almost half a trillion in assets, [BB&T/SunTrust] can put hundreds of millions per year into building this brand and make it stick.” — Julian Hebron, founder of The Basis Point

• “It can’t be a failure yet. It’s too early! A brand is so much more than the name. The name matters, but not as much as we think — think Google and Amazon, for example. The success of [the new name] will be dependent upon their authentic delivery of it. … A made up name gives them space to define their brand promise. A clean slate. One thing is certain, everyone is talking about it. — Amber Farley, EVP of Financial Marketing Solutions

• “Honestly, the first thing that came to mind when I saw the name is ‘altruistic’ — which they could certainly play on. Few company names mean anything to consumers until they are connected to products and services they love, value and, yes, trust.” — Heather Walls, Senior Internet Marketing Manager, Wolters Kluwer

• “Truist Financial has so much more potential as an engaging brand. People quickly judge … [but] they weren’t part of the process and they don’t understand where the brand is headed. Let the brand evolve” — Kirk Lowe, Founder, Top Advisor Marketing

( Read More: How Financial Marketers Can Break Away from Lookalike Brand Strategies )

Many observers noted that rebranding is a long-term project. When Accenture was introduced in 2001 as the new name for Andersen Consulting, it was widely panned as a “made up word,”Fortune notes. But in the end it proved to be a smart move. Even for employees, rebranding takes time to be absorbed. As executive Coach Alisa Cohn observes, “Nobody is going to like the new name. Employees are going to roll their eyes,” She estimates it takes about a year for employees and consumers both to get used to a new name.

1. “Can a big institution change its voice?” That is, can its actual voice match what is promised by the new brand?

2. “Will the technology under the hood live up to a cool new voice?” He notes that both BB&T and SunTrust have taken significant steps in that direction already.