Subscribe Now Get The Financial Brand Newsletter for FREE - Sign Up Now
Banking rivals called the four-foot-high talking android no more than a gimmick. But one year into deployment, 'Pepper' now works in four locations around the country helping to drive some significant metrics. Even HSBC was surprised at its popularity. The robot gives visibility to a massive retail transformation, as the bank's top retail and innovation execs explain.

By now retail banking executives have grown used to the whole “bot” thing — chatbots and other automated solutions powered by artificial intelligence. But an actual talking robot that both mimics and understands human gestures and speech still seems oddly retro — like something out of a space movie.

Even “Pepper,” the cute androgynous robot introduced by HSBC Bank USA in June 2018 as the newest “employee” at its flagship branch on Manhattan’s Fifth Avenue, is not a brand-new creation. HSBC is the first bank to use Pepper in the U.S., it’s true, but at least two other banks, Mizuho Financial Group and Emirates NBD, have put Pepper to work, as reported by The Financial Brand. Pepper is manufactured by SoftBank Robotics Group, which has sold about 12,000 to retailers, hospitals, and airports worldwide.

What makes the HSBC application notable is that the bank credits it with significantly improving several key metrics at its main branch. Two Peppers, in fact, now roam the large three-story branch and the bank has introduced the robot in three new markets: one each in branches in Seattle, Beverly Hills and Miami. A fifth robot is planned for the bank’s soon-to-open new branch in Cupertino, Calif.

Jeremy Balkin, HSBC USA’s Head of Innovation, says there has been a 60% increase in new business at the flagship branch compared to the prior comparable year and more than a five-fold increase in foot traffic since Pepper was introduced. In addition, the bank has tallied more than 1 billion social media impressions about the robot, 99% expressing a positive sentiment. Across all of HSBC’s Pepper devices there have been almost 25,000 consumer interactions.

Other factors contributed to the 60% increase in business, but “most of it is attributable to Pepper,” says Pablo Sanchez, Head of Retail Banking and Wealth Management for HSBC in the U.S. and Canada.

You Can Call It a Gimmick, But You’d Be Wrong

Sanchez, a no-nonsense retail banker who ran Chase’s branch network before joining HSBC Bank USA in 2015 admits he was surprised at the magnitude of Pepper’s success.

Ten million people walk past the front of the flagship branch every year, Sanchez points out, so he knew an intelligent robot was something that could add value. 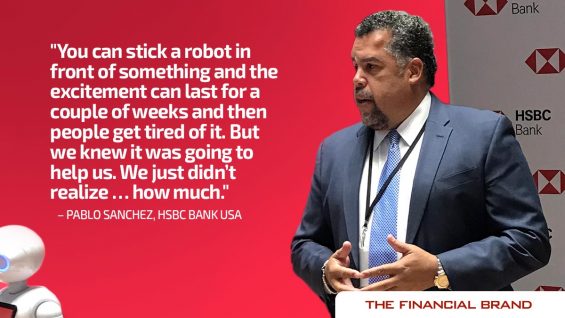 “Lots of folks called it a gimmick,” says Sanchez. “And it could have been. You can stick a robot in front of something and the excitement can last for a couple of weeks and then people get tired of it. Unless the robot adds value then it is a gimmick. But we knew it was going to help us. We just didn’t realize that it would get a billion hits and would increase sales so much.”

The retail exec says there have been cases where people saw Pepper through the window, came in, and interacted with the droid, and then opened up multiple accounts — for millions of dollars in some cases. “It really has exceeded our expectations in almost every way,” Sanchez states.

REGISTER FOR THIS FREE WEBINAR
What Defines Video Banking Economics and Strategic Value Today?
Video banking is proving time and time again that customers and employees will enthusiastically welcome new technologies when given alternate choices.

What Exactly Does a Branch Robot Do?

Gimmick or not, there is a novelty to having a talking android in your bank branch, and HSBC has played that card since the start. Sanchez and Balkin, who joined the bank at about the same time, are in sync with the idea that banking should be enjoyable, even fun, again. So they launched a campaign to #PoseWithPepper on social media.

Beyond that, however, Pepper is a sophisticated digital device. It uses natural language processing, a component of artificial intelligence, to understand multiple languages. (Balkin, who is Australian, says he was particularly impressed that Pepper understood his accent perfectly the first time, something many humans don’t do!) The SoftBank robot is said to be capable of recognizing basic human emotions and adapting its behavior to what it perceives.

The touch screen on its front can be used to show tutorials and instructions, such as how to deposit a check using the bank’s mobile app, and to provide information on product features and promotions. The robot can provide information relating to about 300 actions including opening an account and applying for a credit card.

In some ways Pepper functions like a human concierge. It asks what the person needs help with and will communicate directly with branch staff to route the consumer to the appropriate person. The bank says robot has helped reduce waiting times and frees up bankers who don’t have to explain basic product features.

The differing demographic appeal of Pepper is interesting. Balkin says that after a year’s experience with a robot in branches, he’s found that adults over 40 and children under ten are the ones most enthralled with Pepper.

He reasons that for the 40+ crowd “it’s banking like they’ve never seen before. It’s interactive, it’s fun, gamifying.” Balkin figures Millennials find this sort of technology less amazing. But with the kids, he says, “I’ve never seen so many children under the age of ten coming into the bank branch with their parents while their parents are banking there. You see the wow and the smile on their faces. When Pablo and I joined the bank, we talked about wanting people to love banking again — both our staff and our customers. We’re really proud that we’re doing that.”

The popular android is actually the public “face” of a much larger change ongoing at HSBC’s U.S. institution. Balkin goes so far as to describe the big bank as a new “challenger bank.”

At first it may seem a little incongruous that the No. 14 bank in the U.S., which for years had a sleepy reputation in terms of its retail presence in the U.S., would regard itself as a challenger bank. But there are facts to support that claim. With the encouragement and financial support of top management, Sanchez, assisted by Balkin, has been engaged in whirlwind transformation, still ongoing, to the tune of more than $400 million, including tech upgrades.

“We had under-invested in retail for a long period of time,” Sanchez states, “and we had to move fast to put ourselves in a position where people would understand that we were listening to what they wanted and providing innovative solutions for them.”

A slew of changes followed, including voice authentication, updated call-center telephony, a digital wallet, new card products, a pilot program for branch bankers communicating with associates within the branch by Samsung smart watches, and changes to its mortgage and wealth management businesses. 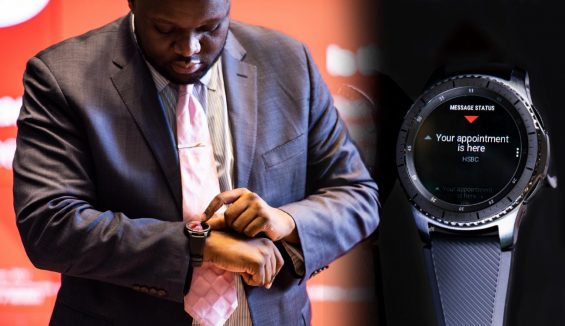 “There nothing we haven’t touched here to try to make the experience better for our customers,” says Sanchez. He readily agrees that having the support and resources of the parent institution — HSBC Holdings, the fifth-largest bank in the world — was essential in being able to do this in a timely manner.

Even so, there are limits and the bank couldn’t build everything itself. Over the past 18 months HSBC has announced a string of fintech partnerships to boost its capabilities in key areas.

“We wanted to get to a sense of scale quickly, so we have become a platform of platforms,” Sanchez states.

“We built a challenger bank from within,” adds Balkin.

No ‘Hub and Spoke’ for HSBC, Thank You

For all the digital upgrades they’ve instituted, Sanchez and Balkin never considered walking away from the physical channel.

“Name me a digital bank that has successfully transformed transactional banking into relationships. There isn’t one.”
— Pablo Sanchez, HSBC Bank USA

“Name me a digital bank that has successfully transformed transactional banking into relationships,” Sanchez states. “There isn’t one. Anyone can put out some above-market rates, provide a nice digital journey and raise a bunch of deposits,” the banker continues. “But can they provide a relationship, provide more financial services for consumers if they need it? To me that’s my idea of success, and I don’t think the digital banks have proven that.”

HSBC believes in combining the power of the physical with advanced digital. And so it has turned its branches into advice centers. But not to the exclusion of transactions. It’s a point long-time branch guy Sanchez feels quite strongly about.

“We don’t think people are going to pack up the kids and drive several miles to a branch to have somebody say, ‘Sorry, we have a hub-and-spoke model and you can’t do get a cashiers check here. But if you drive another five miles to another branch they can give you one’.” That’s nuts is Sanchez’ assessment of that model.

Full-service branches are expensive, Sanchez concedes, but adds that, “The good news is I don’t have 5,000 branches to have to worry about.”

Currently HSBC USA has 229 branches and is planning to build about 50 more over the next three years, according to Sanchez. But he has no intention of trying to compete in the mass-market space up against Chase and Bank of America.

‘Our Natural Right to Win’

As spelled out by Sanchez, HSBC’s retail strategy is build around micro markets on the coasts where international customers are plentiful.

“Our natural right to win is that international space as the world continues to be smaller and people are more connected despite all the talk about immigration.”

He says the U.S. markets where the bank has a presence represent about 70% of the incoming population into this country. These include the New York metro area, the Mid-Atlantic states, southern Florida, Seattle, San Francisco, and southern California.

“In today’s world,” says Sanchez, “we might just have the advantage by being in fewer spots, in the right places, and providing what Jeremy and I call ‘phygital’ banking experience.” In other words, the ability to go to a branch and deal with people if you want to and the ability to bank when where and how you want to digitally.

And, in HSBC’s case, Pepper would be on hand to make you smile and to understand you if you have a bit of an accent.