Subscribe Now Get The Financial Brand Newsletter for FREE - Sign Up Now
In this exclusive interview, Jeffrey Hayzlett, the former CMO of Kodak, discusses the importance of strong leadership, the need for a well-defined culture, and the risk of being passive when your industry is facing massive disruption.

During a time of business transformation, the leadership of an organization can determine if an organization thrives or struggles to survive. Not all of the measurements of success are on the balance sheet or income statement, however. Often, the positive financial results of an individual firm, or an entire industry, can lead to complacency and a lack of focus on future challenges and opportunities. To succeed, leaders of the future need to not only make money – they need to create a culture which enriches the lives of employees and responds to the needs of consumers.

Veteran entrepreneur and former Kodak CMO Jeffrey Hayzlett has vast insights into what it takes to be a great leader in a time of disruption. During his keynote presentation at The Financial Brand Forum 2019, Hayzlett challenged bank and credit union executives to examine their values and behaviors while he provided great case studies on the importance of aligning values with an organization’s overall mission. He also stresses the importance of embracing new technology and the need for leaders to not become passive. 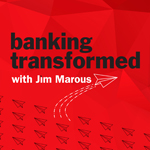 In his best-selling book, The Hero Factor, Hayzlett asked the audience of more than 2,000 to decide what they valued and to hold themselves accountable to live those values consistently and sustainably in everything they do.

I sat down for an interview with Jeffrey to get some additional insights into how banks and credit unions need to focus on the transformation occurring and the importance of innovation and change management to drive business growth. Here’s what the global business consultant, speaker, author, and CEO of The Hayzlett Group had to say.

What is the biggest challenge for banking leadership today?

Hayzlett: It’s always the mood and mindset. A lot of people talk about the culture, but first I’d attack the mood of your employees, then I’d go after the culture – because culture takes a long time. But it’s also a leader’s mindset. A leader’s own hubris of success.

You know, at Kodak we had that. We believed that we would never go away, and that the photograph would never go away. And it never did. It just digitized. And therein lies the issue. All these up-and-coming young upstarts are really from a digital age.

Who would have thought 10 years ago that you would let someone rent your house and they’re going to sit naked on your couch. You’ll get paid for it and you’re going to let them have your house for a weekend or a day. Who would have thought 10 years ago that you’re gonna let your daughter get into a car of a stranger, that’s unmarked, at 2:00 a.m., after drinking and having a good time? It’s just absurd.

Is the challenge greater because the industry is making so much money?

Hayzlett: But they could be making a lot more. And they could be serving the consumer much better. And that’s the problem. Many companies, be they financial institutions or other businesses, fall into a thought pattern of, “I’ve got to do it this way because that’s the way we do it”. Or, “it meets our systems.”

We work with a group called The Hero Club, which is a group of very highly aggressive, high-growth CEOs who are based on values. I don’t know any of them that have traditional banking relationships anymore. You know we’re using OnDeck. We’re using LendingTree. We’re using other fintech firms like PayPal.

Old rules don’t apply. You have to adapt and have to be quicker. You have to just flip it around and say, “OK, stop what we were thinking and let’s think about it in a different way.” And there are companies have done that.

Can you provide an example of a company that has ‘flipped it around’?

Hayzlett: Domino’s is a great example. Changing the way they do business and changing their brand promise … literally overnight. And look at the results. Their stock went from 70 cents to $109. All because they said, “We suck and we’re not doing it right. Let’s get out of the business of delivering you a box on time and let’s get you something you want. The way you want it and let’s be real about it.”

Can investment in new technology solve the problem?

Hayzlett: Well it can’t hurt, but you want to know that it’s being used for the right reasons. You don’t just build it to build it, and hope they come, because all you have is a baseball field in the middle of Iowa and no one will visit. The key thing is to always get back and capture customer behavior. And I think that’s a lot of what we fail to do.

In business, we traditionally put up 800 numbers because we want consumers to deal with us from 8 to 5. Who has that anymore? You know we’re working 24 hours, seven days a week, so they want us to be available all the time and with the mobile phone.

That has changed the way we’re conducting business. It’s why Zuckerberg and all these great business leaders are going mobile first and mobile always. And you’ve really got to get that mindset.

And by the way, you mentioned that it’s been better financially in banking than it’s ever been before. That’s the time you change. Before it gets worse. Because, when it’s getting worse, you’re limited on your options. You can’t do as much as you’d like to do. So you really want to do those things while you’re moving to the top or at the top. It is the best time.

Do the big tech firms and small fintechs have an advantage?

Hayzlett: These are industries that are likely predatory to your own. They are very aggressive. But, in the financial world there’s always been some unwritten rules. Between a community bank and another community bank, there’s always been this unwritten handshake. They show mutual respect and don’t try to disrupt the other. There’s going to be players that enter this market that have no respect for the old way of doing things.

How do we change legacy cultures?

Hayzlett: First, you need a vision of what it is you want. As I discussed in my book, The Hero Factor, those companies that have a stated vision – and where employees can say what it is – they earn more money. They gross more money. They have happier customers. They have more engaged employees. And they have vendors who want to do business with them. That’s a pretty good thing, but it all starts with what is it we’re gonna really do. And do we all have similar values around that? That’s always the way.

I look at my businesses. I serve on numerous boards, own a lot of businesses and actually run some businesses. I can’t even tell you where the checkbook is. I haven’t been inside of a bank in two years. When I say I don’t go to a bank, I may still use an ATM. But that’s all I’m doing. In fact, I flew here today with no cash in my pocket. Zero. No cash.

At the end of the day, the really biggest thing that we saw was, you need to pick a side. I don’t care what it is you want to be, but be it. And whether you want to be a wanna-be, a do-gooder, a hero company, or even an operational excellence kind of company – pick a side.

But, don’t tell me you’re an operational excellence company with hero values. It’s not the same thing. You know you’re going to lay people off, you’re going to put profit over people, etc. As opposed to a hero company that puts people over profit.

Pick a side and execute.