Subscribe Now Get The Financial Brand's FREE Email Newsletter
What will replace the personal computer, smartphone and other digital devices that dominate transactional banking today? With 5G networks about to roll out, augmented reality and mixed reality becoming more pervasive, and AI, voice devices, and other Internet of Things (IoT) integrations, could completely new forms of engagement be on the horizon?

It wasn’t so long ago that all banking was done in a branch, by phone, via an envelope or at an ATM. Then came the personal computer, and online banking became popular because of its convenience and ability to track balances, which used to require a branch visit and updating a passbook.

Today, most transactional banking is done on mobile devices. The smartphone’s dominance in banking and of consumers’ communication, social, entertainment, health, shopping, scheduling and research lives is the perfect example of digital integration done right.  Today’s smartphone replaces separate music players, cameras, game consoles, fitness trackers, personal digital assistants and a phone. Most likely, the smartphone will eventually be replaced by something even more integrated with our daily lives, more intuitive and less tactile. In fact, Gartner believes that by 2020, the majority of our devices will be designed to function with limited or no touch.

The question is, what will be the banking device of the future? And, with research saying that 95% of Americans now own a cellphone of some kind, and 77% own a smartphones (compared to just 35% in 2011), will anything replace the smartphone?

There are many who believe the “next big thing” will combine digital technologies and capabilities, including virtual and augmented reality, enhanced biometrics, voice, and other functionality powered by the cloud. The device (or lack thereof) would connect all parts of a consumer’s life, from banking to travel, hospitality, shopping, social media interactions and connecting with others. Voice devices like Amazon Echo and Google Home may be early iterations of the next phase of banking, and wearable devices like the Apple Watch have potential far beyond what we are seeing today … but is there even more coming?

Early use of augmented reality using devices like Google Glass may have made inroads, but didn’t garner wide consumer acceptance because of numerous technological and customer experience challenges. While the future of banking engagement may have parts of all of the above, it’s hard to clearly imagine what’s next, just like it would have been hard to image the combination of so many features and functions within today’s smartphone.

Maybe some version of today’s smartphone continues to be the device for the future of banking, since it has become such a central part of everyone’s life. Maybe we are just talking about continuous iterations and improvements on what already exists in a different form of handheld device. This may be the path in the foreseeable future, since so much integrated functionality would need to be replaced by the next version of connectivity.

To get an idea of what people in the financial services industry and in other industries thought would be the future ways consumers would  engage with their banks, I reached out on Twitter and LinkedIn for opinions. There was no lack of response and, while some contributors believed some current technologies would expand in use (digital voice assistants), others looked much further in the future. 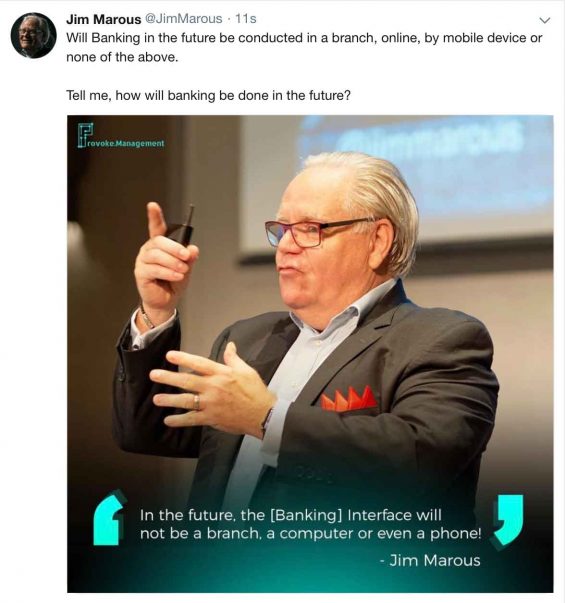 “Banking will be entirely hidden under experiences that we won’t recognize, just like Lyft and Uber have hidden payments.” – Alex Jimenez

“I think we need to think beyond these limitations, already we are seeing a convergence of ‘value exchanges’, where the role that payments and cash is declining. With integrated point-of-sale and the shift towards invisible payments, it’s only a matter of time before brand and product loyalty, affiliations, and supply chain value are included in a the real-time decisioning of what you pay with. Imagine two guys walk into CVS to buy a can of Coke. Because each of them have different loyalty of brand value, one pays $1.07 while the other pays $1.54. But the reality is, this kind of offering is unlikely to come from a bank, or even a payments company. More like a GAFA company that just pulls from the various forms of value the consumer stores.” – Scott Bales

“In the near future I believe in conversational interfaces powered by voice, chat and ultimately … telepathy! Yes! Our thoughts! That’s my ultimate dream that will get rid of physical and digital user interfaces that by definition are always heavy and cumbersome!” – Sonia Wedrychowicz

“In the future, banking will be something that happens rather that something you do.” – David Jimenez Maireles

“Banks will adapt and finally figure out ways to add more value. Right now our industry is going through a transition period.  Once we figure out what it means to be an ‘open bank,’ with real-time transactions and a focus on mobile, the industry will be able to move faster. The architecture to enable this will take another several years, but banks will see a larger, not smaller role ahead. Solutions like treasury management, retirement savings, investments, ID verification, risk management, vendor selection, asset management, trust, etc., will see renewed growth. This means more jobs and engagement and not less.  Of course, I could be whistling in the dark.” – Chris Nichols

“From the consumer point of view, there won’t be an ‘interface.’ The connection to the bank will be invisible as banking activities become integrated into everyday lives. No more taking time out to ‘bank’ … it should be as easy as buying a coffee. And there should never be any worrying about security! The channels will continue to increase through integration with social media, a variety of third-party sites (e.g. retail outlets), messaging apps, voice-powered devices like Alexa, and even (dare I say?!) the branch! The key message – the right banking service available to the customer at the right time.” – Lucy Heavens

“In the next 12-18 months, there will be a re-consolidation of banking services and over time these services will more seamlessly integrate into customer’s every day lives. While technology will continue to automate and enhance the experience, people and a personalized experience will still be at the core.”– Scarlett Sieber

“Immediate evolution is to do banking via assistants like Google Home, Alexa or Siri. In future there would be more layers built and we may wear sensory implants or gadgets that can help us to think our way through for the transactions.” – Agility Exchange

“At the consumer level, I’d say the trend is for each of us to have our personal private banker – except that it won’t be human. My own personal AI advisor will tell me what I should do, when I should do it, and how I can accomplish my financial and non-financial goals. Will it be through Alexa with voice, or HSBC on their website, or Apple on my watch? This will have to be where I spend my digital life the most” – Huy Nguyen Trieu

“Banking features as onboarding, KYC, product signups, and etc. will move to the background by collapsing all flows into one tap or voice request. Voice banking will not eliminate graphical user interfaces or any other visual connections with banking service providers. Maybe we will have 3D-holography chips under our skin, but it will show us the range of banking products in a clear visual manner. With global digital accessibility and open banking, any user will be able to use thousands of banking solutions. And even if AI suggest better a solution, it is important for user to make decisions on his own to keep sense of control. I think future interface will be a mix of voice and visual interface similar to one in Blade Runner 2049.” – Alex Kreger

“Look at Ant Financial Intelligent Services accurately predicting consumer needs not only by product but by journey of multi products tied together smartly, all underpinned by AI on huge data of context. Also look at Tencent which also already does all the consumer ecosystem of banking inside a consumer’s life on WeChat. In some parts of the world, it may be easy to guess the future … just look around the corner at what other regions are doing.” – Adrian Hausser

“Consumers will be provided with a complete personal finance dashboard bringing together the day-to-day – their debt with their long-term savings and employee benefits – giving them a far more informed view of their present and future financial position. Banking will become relegated to a transactional function that sits below this. Micro savings will transform the way that consumers provide for the future by applying a personal tax to the current spending to provide for their future lives.” – Ian McKenna

Folding phones and added smartphone features will keep mobile as the primary digital banking tool for the near term … at least. Most people are too addicted to their phones to abandon them entirely if/when new technologies get introduced. But, there are a lot of amazing innovations being introduced almost every day. In much the same way that digital music players, traditional cameras, hand-held gaming systems and PDAs once dominated, we may not realize that the “next best thing” has arrived until people buy them en masse.