She looks human, and she even sounds human. She’s not human though. She’s Sophia, a rubbery-skinned digital human, powered by deep learning and artificial intelligence. She has facial expressions. She can recognize you. While she’s not quite ready to discuss your 401(k) investment options just yet, all she needs is a little more on-the-job training.

While she hasn’t yet landed a job at a bank or credit union yet, Sophia is already somewhat of a celebrity, having made the rounds on talk shows like The Tonight Show with Jimmy Fallon.

Dr. David Hanson, CEO of Hanson Robotics and the creator of Sophia, describes Sophia as a “social robot” in that she can process emotional data and form relationships. (For the record, Fallon’s facial expressions and body language show that he’s a little creeped out by Sophia.) 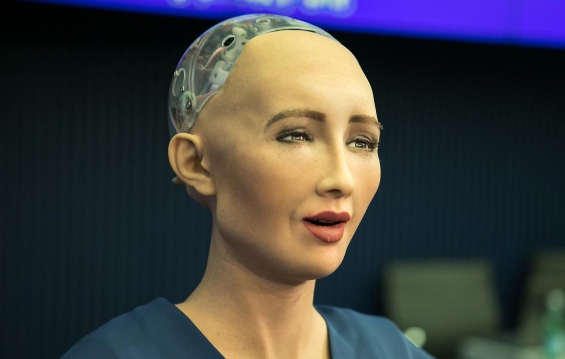 Martin Haering, Chief Marketing Officer for Finastra, demoed Sophia at a Finastra event in London. Although Sophia gave an impressive performance, Haering says that you probably won’t find Sophia behind a teller counter any time soon. He estimates it will be five years until the market has a “rock solid product to replace a teller.” But it’s just a matter of fine-tuning. Sophia is already equipped with all the technology she needs to be employable. She can recognize faces and voices, she learns from her mistakes, and robotics have advanced enough that she can move her face and body to closely mimic a human.

Sophia, and other humanoids like her, are equipped with deep learning, a higher level of sophistication than your garden-variety artificial intelligence (AI) — something that you can thank Dr. Hanson at Hanson Robotics for. He’s described as a modern-day renaissance man who has built a worldwide reputation for creating robots that look and act amazingly human. After working at Disney as an “Imagineer,” Dr. Hanson aspired to create machines that can surpass human intelligence. For that to happen, Dr. Hanson believes that three distinctively human traits must be integrated into the underlying artificial intelligence: creativity, empathy, and compassion.

With AI, computers can have the ability to reason, discover and analyze data to draw reasonable conclusions in much the same way that human brains do. The only difference is that AI relies on filtering huge volumes of data.

“Machine learning, a component of AI, is a mathematical algorithm that uses statistical measurement and analytics to interpret data and make a recommendation,” explains Haering with Finastra.

The next step — the one that actually embeds human intelligence into computers — is deep learning, which Haering describes as the ability to learn from past experience and discover things on your own. For example, Sophia’s eyes are cameras. If she says something and you laugh, she learns that what she said was funny.

“Robots like Sophia can learn from your behavior,” says Haering. “The deep learning algorithms get smarter and smarter, which is not the same as machine learning.”

Sophia’s appearance on stage at a Finastra event wasn’t necessarily meant to show what the next generation bank teller will look like, adds Haering, but to raise awareness of the role of AI in banking — everything from chatbots to how AI can work in back office situations like fraud detection.

Indeed it seems unlikely that the average consumer would be comfortable interacting with a rubbery-skinned robot in a real-world branch environment. After all, someone that has decided to get in their car and drive to a branch for a face-to-face experience with a human being could be extremely irritated with a synthesized android.

Haering doesn’t really believe that Sophia will actually replace tellers either. And while branch tellers don’t have to worry about their jobs being taken over by robots like Sophia, they probably should worry that digital banking could make tellers irrelevant.

“There won’t be tellers in the future,” Haering speculate. “There will still be branches and real humans in them, but these humans will provide consultative services for complex products rather than transactions.”

Sophia isn’t the only humanoid gunning for banking jobs. NatWest has Cora. Cora used to be a disembodied chatbot — living only in text-based conversations. But she’s now been given a tangible, visible, human form. 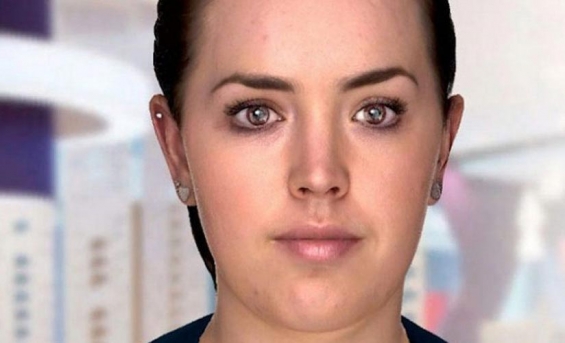 Cora’s human-like appearance includes ear piercings and facial expressions. The subtleties of detail are impressive — blotches on the skin that are barely detectable but very convincing, small irregularities in the texture on Cora’s chin, slightly bloodshot eyes.

In her past life as a text-only chatbot, Cora was having about 100,000 conversations a month with customers, answering about 200 different banking questions. Today, Cora has been transformed into a digital human that can talk to consumers through a screen.

To bring Cora to life, NatWest partnered with New Zealand-based Soul Machines, which says its digital humans are life-like, with an unprecedented level of intelligence and natural expressions. Soul Machine’s co-founder helped bring digital characters to life in Hollywood films like King Kong, Avatar and Spider Man 2. And like Sophia, Cora learns from her experiences in ways that continually make her more human.

“Soul Machines uses biologically inspired models of the human brain and neural networks to create a virtual nervous system for their digital humans that can detect human emotion and react verbally as well as physically, through facial expressions,” explains NatWest. “Like humans, it is trained when dealing with new subject matter and when she makes mistakes she learns, so that over time the interactions become more and more accurate.”

In fact, every one of Soul Machine’s humanoids has their own personality. If Cora goes on an interview for a bank teller job, Soul Machine will incorporate “a range of emotional responses, expressions and behaviors that are consistent with the role and the core values of the organization they will be representing.”

Cora is currently able to answer basic verbal questions such as “How do I login to online banking?”, “How do I apply for a mortgage?” and “What do I do if I lose my card?”. NatWest said it could help cut down on waiting times because it would be able to deal with simple problems, adding that Cora’s AI skills would eventually expand to answering hundreds of different questions, even detecting human emotions and reacting verbally and physically with facial expressions.

NatWest says that digital humans like Cora can improve the service experience by cutting down on wait times and “providing consistent, accurate answers all the time in a way that humans can’t always do” — 24 hours a day, seven days a week.

“Testing has suggested customers that have avoided digital services in the past may be more inclined to interact with digital humans like Cora,” a spokesperson with NatWest explained. “The technology has real potential for the future and we’re also looking at how we can use it to help train our staff on certain subjects. It could also help blind and partially sighted customers who are unable to engage with visual content.”