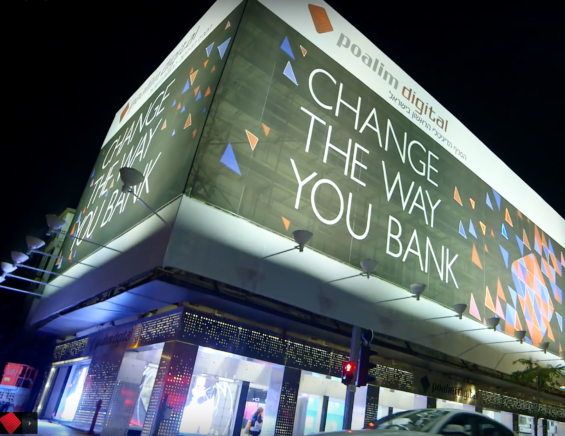 People often regard Israel as a hotbed of innovation, and acknowledge its reputation as a technological leader. However, that usually doesn’t include the banking industry. That changed when Bank Hapoalim opened its “digital branch” in Tel Aviv — the first in Israel and one of just a handful such experiments around the world — back in November of 2015.

“Today’s banking consumers expect experiences from us like they get from Amazon and Google,” explains Yair Seroussi, the chairman of Bank Hapoalim ($110 billion in assets). “We must provide them that experience here and now.”

Bank Hapoalim, one of the more progressive institutions in Israel, is redefining the brick-and-mortar banking experience with their “Poalim Digital” concept, the first totally digital bank branch in Israel, and one of the very few such branch models you’ll find anywhere.

There are no tellers, no lines and — most impressively — not a single piece of paper to been seen. With its modern styling, giant digital screens and iPad counters, the branch could be mistaken for an Apple Store.

The bank claims customers can still perform most of the typical banking tasks that they would in a traditional branch, they just do it digitally — on tablets, smartphones, smart watches, digital touchscreen walls and interactive digital workstations.

For instance, customers can make an appointment to meet with a banker through the bank’s mobile app. A Bluetooth detector can sense when the customer enters the store and automatically send a notification to the banker’s Apple Watch. The watches are also let bank staff know when a customer in the branch needs help and has requested assistance.

Other highlights include live, two-way video chat for personal investment advisory services. There is the “Poalim Store,” an interactive, wall-mounted touchscreen that allows users to explore the bank’s products and services. There is the “Digital Desk,” a tabletop touchscreen where bank staff and customers can interact. The “Poalim Explorer” is a sophisticated LCD digital wall, enhanced with an advanced audio system.

On multiple devices, there is an interactive tool that lets users calculate the average monthly payment on loans, and touchscreens that allow customers to build other similar types of financial simulations. For example, a customer who wants to save for their kid’s college fund can determine the amount they would need to automatically set aside each time they made a deposit.

Perhaps the coolest (or at least most practical) feature: Customers can withdraw money at an ATM using their smartphones. Even before you leave the house, you can open the bank’s app, pick an amount to withdraw, and select what denominations of banknotes you want. Then when they go to the ATM, the same contactless technology powering Apple Pay and Google Wallet is used to retrieve their cash. Using iBeacon technology, customers can request approval for withdrawals that are over the daily limit.

The new Poalim Digital branch concept is being used as a giant advertisement for the bank’s digital services. Bank Hapoalim wants to let customers know that — in most cases — you don’t actually need to visit a branch, take a number, and fill out forms in person. It’s somewhat ironic, but they are essentially using the Poalim Digital branch to tell people they don’t need to use branches anymore.

“If the customer is digital, why do they need a physical branch?” wonders Bank Hapoalim’s CEO Zion Kenan out loud.

Unlike most other institutions that have dabbled with “digital branch” projects, Bank Hapoalim isn’t stopping with just one location. The branch in Tel Aviv is one of four it is rolling out initially, and the bank says it has plans to retrofit some of its traditional branches with successful components from the Paolim Digital model.

They say bank branches are like giant billboards. The exterior of the Poalim Digital branch takes that literally, promoting the bank’s image as a digital leader. The exterior is cladded in anodized aluminum. During the evening hours, passersby can see LED light shine through holes cut into the aluminum, creating a soft, contemporary glow around the perimeter. The project was designed and developed by SC Architecture Studio.

Bank staff use tablets to provide service to customers. Any signatures needed are handled digitally on these tablets.