Subscribe Now Get The Financial Brand Newsletter for FREE - Sign Up Now
Legacy banking organizations are filled with career bankers who are set in their ways and naturally resist change. These managers can stifle the creativity and innovative spirit of others, impacting the ability for the organization to make needed transitions and remain competitive. What type of banker are you?

Banks have been talking about a legacy holding them back for decades, but usually this discussion revolves around IT, core banking systems, distribution channels and traditional operation processes.

As banking has tried to embrace the required components of becoming a more digital organization that is better positioned to defend against an increasing number of FinTech start-ups, a question has been raised by many in the industry … “What is the biggest impediment holding the banking industry back?” The answer may be as simple (or complicated) as the people within the organization.

People do the work, make the decisions on what to invest in, define the culture and decide who to hire and who to promote.

Despite FinTech startups picking off customers around the edges, banks still have most of the customers, billions to invest in technology and marketing, but have now become calcified around processes and technologies that no longer serve the organization or the consumer. Banks and credit unions, in their current form, are becoming less relevant to the challenges and market that they operate within despite having a wealth of resources and experience.

The financial crisis, re-organization after re-organization, low wages relative to expertise and a public perception of being the “bad guys” have left significant splits in the workforce of most major financial institutions.

A) The Decision Makers
These are the absolute few. Some sit up in the clouds where the air is thin and have achieved prominence in the organization by “doing their time.” Many of these are lifetime bankers with a history of being right by doing things the way they have been done in the past. Unfortunately, there isn’t a new wave of capable people being brought in to respond to the new realities in banking. How much change can so few make? Time will tell.

B) The Empowered
These are one of the smallest group in the bank. They have the power to make and influence real change across the entire organization. This is not to say they are capable, but they have power at their disposal to impact organizational culture and the overall strategic direction of the organization.

C) The Retire to Be’s
Estimate are that this category of banking executive equates to roughly 10% of the overall workforce. They have likely been at the organization a long time, probably have a large retirement war chest and a potential bonus pool that is a driving factor in their decision making process. This group, generally speaking, do no push the agenda or seek change in the organization. In fact, they may be the roadblock to many of the changes needed within the organization. Given their tenure, they are likely middle or senior management that have an impact on daily decision making.

D) The Incompetent
The Peter Principle states that employees only stop being promoted once they can no longer perform effectively, and “managers rise to the level of their incompetence.” This is a good way to think about this category of banking employees. For some organizations that are hundreds of years old, there could be a lot of these employees.

They have likely been in the organization for good period of time, but are a generation younger than the ‘Retire to Be’s.’ They have been with the company long enough to have worked to be in middle management, but are too young to be thinking about retirement. Their ability and knowledge level are not fit for the challenges of the current market, yet they are in a position of authority. They are usually doing a job that they are either aware they are not prepared for or, more dangerously, are not aware of their incompetence.

E) The Deadwood
This category of employee is in a job and/or an organization they don’t care about, and are probably just there for the money. There is nothing wrong with this group, and in many cases they can get the job done. They just do not have the desire to spearhead change within the organization. If they stay in the organization, they will most likely transition into being ‘Incompetent’ or a ‘Retire to Be’ and, in a few rare examples, become an ‘Empowered’ employee.

F) The Disenfranchised
This is potentially the largest and the most dangerously balanced group within most organizations. This type are in a company they care about, but unable to make a change due to the existing culture within the organization. They often have their own budgets and are prevalent throughout all levels within the organization, but feel powerless to move such a large organization to where it should be to compete in the future. They have been at the organization long enough to have seen change not happen and it has begun to impact their willingness to ‘rock the boat’.

G) The Outsiders
This category of banker has the risk of becoming ‘Disenfranchised’ if not managed correctly or given the opportunity to make change happen. They will have been at the organization long enough to realize the difficulty of ‘going against the flow’, but have resisted giving up the hope that they can make a difference.

While working within the organization, they wear the ‘Outsider’ mentality as a badge of honor, maintaining an ‘external to the bank’ perspective and believing in the art of the possible. Arguably, this pool of people provides the greatest hope for change, as they are aware of the challenges of the organization yet won’t approach these challenges the same way that others before them have. They will create friction within meetings (especially among legacy managers) because they enjoy doing things differently than the norm.

H) The Eager Beaver
This category represents employees who are looking for opportunity and are keen to make change happen, but are not in a position of power or influence usually due to their lack of tenure. These employees are typically between the ages of 18 and 40, with some having significant experience outside of the banking industry.

These employees are usually naive to the way things have been done in the past and can provide a fresh perspective if listened to. Unfortunately, the response in meetings to their ideas usually includes the phrase, “That’s not how we do things here”. For an organization to thrive in the future, it is important that the enthusiasm of the Eager Beaver and Outsider are not thwarted, pushing them either into the Disenfranchised category … or out of the organization.

Interestingly, the categories of employees follow a standard bell curve when looking at the penetration within most organizations. Unfortunately, there are a greater number in the middle ranks, with significantly fewer in the top and bottom categories. 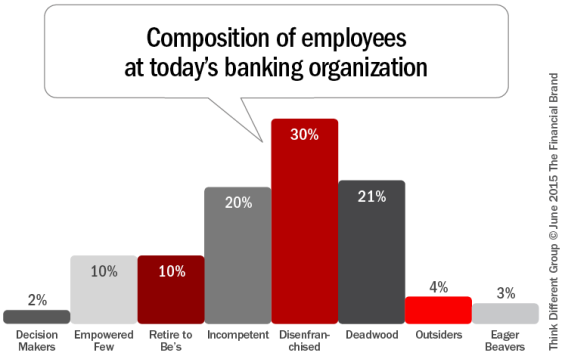 With this distribution, if 71% of bank employees are Incompetent, Disenfranchised or Deadwood, are we really surprised with the current state of the banking industry?

Look around the room during your next meeting. Who in the room would you put in what category, and how could this impact the ability to move your organization forward? Who would you want on your team? How do you convince the others of the need for change?

More importantly, if you looked in the mirror, what type of banker are you?

David Brear is a digital financial services transformation consultant, designer, technologist, curator, writer, speaker, strategist & self-described general FinTech Fanboy. Brear has a deep range of experience & qualifications across a number of digital disciplines with experience in agency, consultancy & client side work for a number of top financial services brands. Most recently, Brear headed the UK Digital Banking practice for Gartner Consulting, helping key banking clients put in place the right foundations and innovations to grow, expand, defend and run their markets and operations. David Brear can be followed on Twitter.