Subscribe Now Get The Financial Brand's FREE Email Newsletter
Apple is uniquely positioned to take its current cachet with regards to simplicity, design and trust and help the banking industry deliver a better experience than was possible in the past. Will Apple Watch, Touch ID, Apple Pay and Apple Wallet be a gift or a curse in the long run?

While it is not yet clear the extent to which the launch of Apple Pay, Touch ID, Apple Watch and the Apple Wallet will have on digital bankers’ development plans, there are several proof of concepts in the marketplace that are exploiting these new capabilities. Digitally mature banks such as Westpac, La Caixa and BNP Paribas are being first movers, with several U.S. banks also testing biometric authentication, geolocational capabilities, audio features and notification/alerts.

Beyond the enhanced capabilities of the new Apple introductions, we are seeing varied ways in which customers can enroll and use these features. For example, different approaches have been taken to activating Touch ID; from explicit opt-out to requiring additional authentication to opt-in.

Native Apple features are clearly having a large and ever increasing impact on digital banking, and the first movers have set out a solid foundation for future implementation and innovations. Going forward, it appears banks and consumers will continue to benefit.

Mobile Banking on the Apple Watch 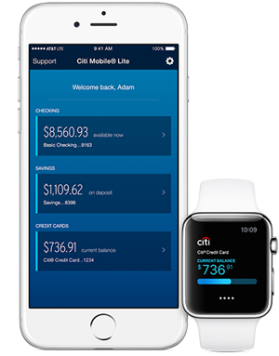 With the launch of the Apple Watch in April 2015, Mapa Research has found leading banks introduce the first generation of apps with functionality ranging from notifications, account balances, branch locators, currency converters, PFM tools and more.

One unique approach we have seen comes from Citibank (US). Functionality includes checking, savings and credit card balances, transaction view (five most recent) and account notifications. Instead of requiring customers to link the watch app with the main mobile banking app, Citibank has launched a dedicated Mobile Lite app.

Direct, password-free access to account information on the Apple Watch and iPhone is also enabled by Citi Mobile® Snapshot, an opt-in feature Citi introduced in 2014 that enables customers to view information without having to log into their accounts every time. Citi was the first major U.S. bank to offer the feature.

The bank says their watch app is safe, in part because they offer ‘view only’ information and financial data isn’t stored on the watch. What’s more, the app, like many watch functions — with some exceptions, such as Apple Pay — won’t work, if the watch is not near its paired phone.

Westpac Australia takes its app to the next level with access to its Get Cash feature. This service allows customers to withdraw cash from an ATM without a card using a one-time passcode. While the code is generated within the app, the customer can view the code and how long they have left to withdraw the cash on the app. The benefit with this service is one of convenience as customers can view the code and remaining time on the watch as opposed to taking out the phone.

In addition to the Cash Code feature, Westpac also offers turn-by-turn directions to the nearest Westpac branch or ATM with a map functionality as well as the location of the nearest Global Alliance ATM through its travel notification capability. 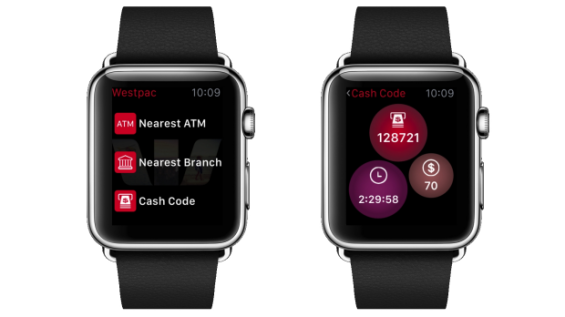 A final example of a unique feature on Apple Watch is offered by BNP Paribas. Not only does the app include the popular weather balance feature (which shows customers one of four weather images based on their account balance), but also shows pending transactions and the ability to launch live chat and calls via the mobile device from the watch.

The use of the weather balance feature is perfect for customers who want a quick glance of their account balance, and for those who may be uncomfortable with the balance being easy to view as the watch is more difficult to conceal than the phone. The seamless integration between the watch and the phone for customers looking to initiate a chat or call is one of the best examples we have seen in the banking space.

Touch ID, which went live at the end of 2014, is one of the fastest adopted features by banks globally. Not only does the method for opting into the service vary widely across organizations, but the way in which the service is accessed to log into an app differs as well.

On one end of the spectrum are RBS/NatWest, which was the first bank in the UK to launch the feature. Unlike any banks we have seen, customers have to explicitly opt out of the service. 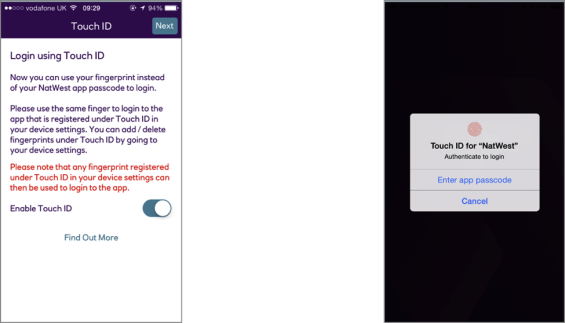 Chase (US), with a highly active mobile customers base, became the largest US bank to launch Touch ID. “We’re focused on making mobile banking faster and simpler,” said Gavin Michael, Head of Digital for Chase. “Touch ID has been the number one request of our customers – and we are excited to deliver it to them.”

JPMorgan Chase’s active mobile customer base has surpassed 20 million – up 22 percent year over year. Other highlights include: 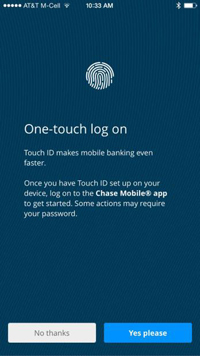 On the other hand, customers of Dutch bank ING have to not only proactively opt in within the secure site of the app, but they must also authenticate Touch ID with their 5 digit mobile banking password. This may be due the fact ING indicated they are looking to use Touch ID as a method for authenticating payments. 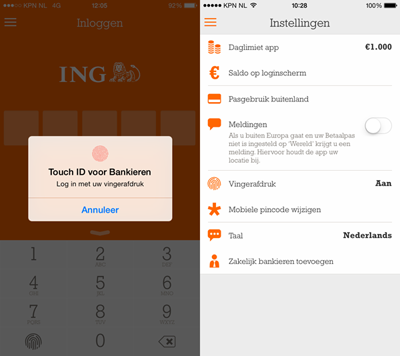 Société Générale has just emerged as the first provider in France to utilize Touch ID in their app, allowing customers to view their account balance pre-login. Additionally, customers have the option to add Touch ID authentication, as an extra layer of security, to access their account balance, pending operations and previous transactions. However, customers cannot use fingerprint verification to log in to the app. 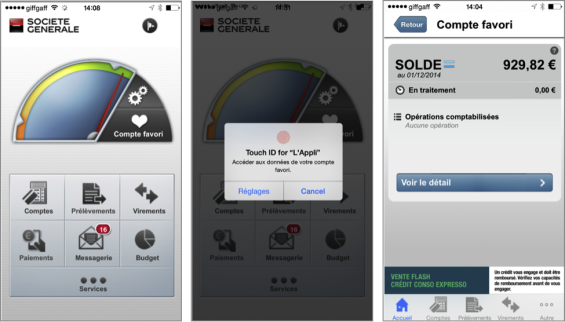 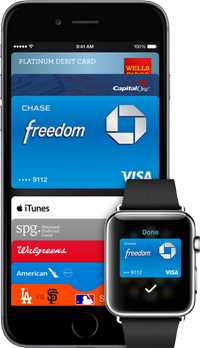 Apple Pay is perhaps the most interesting feature from Apple for the banking world. Right now, 2,500 banks and one million locations support Apple Pay, and app developers are reporting a 2X increase in checkout rates when they’ve added Apple Pay support to their apps. Other recent enhancements include:

Despite an extensive amount of hype surrounding the launch across a multitude of industries the adoption rates have been disappointing. However, adoption appears to be increasing, albeit at a slower rate.

The number of consumers “trying” the service has risen faster than those who are “using” the service, as 85% of those user in the survey have now tried Apple Pay, down from 91% from the previous survey. One survey attributes this to the fact consumers are simply forgetting the option. This coupled, with the speculation surrounding the security associated with the payment; make the future of this feature unknown in comparison to Touch ID and the Apple Watch.

Should Banks be Excited?

There are a number of reasons for digital bankers to be optimistic about the impact of Apple on the industry. In a sense, Apple can be viewed as a supplier of products and services, in particular products and services that will more often than not warrant high adoption rates due to the Apple brand. In addition Apple is largely recognized as a global leader in innovation, a genuine game change, and a pioneer of great user experience

Apple Pay, on the other hand, requires primarily only educational content from banks. The Apple Watch has introduced a completely new medium for banks to service customers, albeit initially at a lesser extent to mobile phones and tablets.

Lastly, Apple serves as a marketing machine for banks. An Apple service a bank is looking to launch requires minimal marketing efforts. For example, when PayM (the UK mobile to mobile payment service) launched, the onus was on the banks to market this service to customers to increase adoption. Within the banking space, first adopters of the Apple Watch app and Touch ID instantly have a positive image and are viewed by consumers as being “savvy” and welcomed by the millennial segment.