At a time when traditional banks are vying to capture the hearts and money of digital consumers, BankMobile joins the fray as the first mobile-only bank in the U.S. that has absolutely no fees. While not the first branchless bank, BankMobile hopes to profitably build scale with an easy-to-navigate platform and straightforward offer.

By David Gerbino, a digital and database marketer based in the New York metropolitan area

In a bold move by innovator and visionary Jay Sidhu, chief executive of Customers Bancorp, a Pennsylvania-based community bank that has 13 branches, BankMobile joins the ranks of Simple, Moven, GoBank, Amex Serve, etc. Unlike many of its competitors, however, BankMobile is an independent operating digital banking division of a real bank. With no fees and no branches, BankMobile hopes to financially empower Millennials, middle class Americans, the underbanked, Gen-X and tech-savvy Baby Boomers.

During the introductory press conference, Sidhu made it clear that he wanted BankMobile to be different from every other bank and credit union. Their ‘Phase 1’ offering includes a totally fee-free checking and savings account (joint accounts are offered as well), a personal line of credit (max value of $5,000), access to 55,000 fee-free ATMs, and a debit card that can be used with Apple Pay. It was stated that BankMobile will be ‘proponents of NFC technology’ and ‘support all innovative technologies including Google Wallet.’

“We are here to revolutionize banking … to help those who have often been victimized by the industry through excessive fees and we will always be a bank built by, and for, the people.”
— Luvleen Sidhu, BankMobile

With an introductory message to interested consumers to ‘Join the Revolution,’ it is clear that BankMobile wants to differentiate their offering. Luvleen Sidhu, Chief Strategy & Marketing Officer, stated “We are here to revolutionize banking … to help those who have often been victimized by the industry through excessive fees and we will always be a bank built by, and for, the people.”

Part of this ‘revolution’ is to reward customers who set up direct deposit. Any customer who sets up direct deposit of their paycheck will be granted VIP Status. Customers with VIP status get two additional benefits: 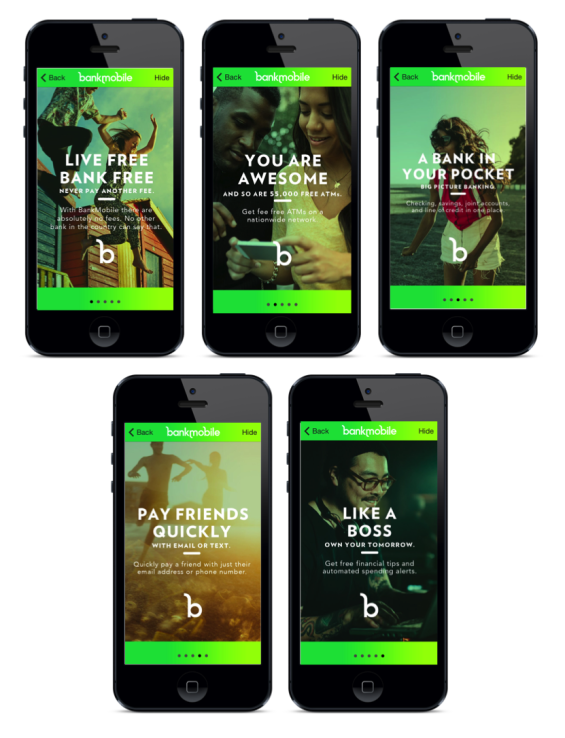 An engaging website design and mobile banking product description were developed in conjunction with the Adrenaline experience design agency.

BankMobile has staked the claim that they are America’s first only no fee mobile bank. Throughout the press conference, CEO Jay Sidhu, a co-founder and former CEO of Sovereign Bank, had some pithy quotes about how some banks make money (“fees are an addiction”) and what some banks consider banking innovation (“dog biscuits and coin counters”).

“Innovation has stalled in the banking industry. While the rest of the world is in the digital age, banking remains stagnant. We are here to change this and bring banking to the 21st century. We will ensure our customers feel involved in the progress of this bank and are offering them a truly enjoyable banking experience – different from anything they have experienced before.” – Jay Sidhu, CEO BankMobile

BankMobile has a clear roadmap to grow their business. Their goals are aggressive. They want 25,000 customers by next year and around 250,000 customers after five years of operation. Based on the information they shared during the press conference, they have an infrastructure and a strategic plan that they believe will allow them to deliver on their lofty goals.

BankMobile’s parent, Customers Bank has 1.2 million student checking accounts across the country as part of a partnership with Higher One Holdings Inc. As students graduate, approximately 200,000 – 250,000 a year, BankMobile will be looking to migrate those accounts. According to Luvleen Sidhu, they expect 20% – 30% of these accounts to migrate to a new BankMobile account.

Additionally, they have a strategy to reach out to the 170+ million people in large affinity groups. This includes unions, associations, and large companies. If they can only convince a quarter of one percent of this affinity universe to join BankMobile in the next five years, that will be 425,000 customers.

The Adrenaline experience design agency championed BankMobile’s full brand architecture, designing its identity, messaging, marketing strategy, and user interface design. The BankMobile app is powered by Malauzai Software. I asked Ms. Sidhu if BankMobile is simply an off-the-shelf banking solution? According to Ms. Sidhu, “The application is not ‘off the shelf’. Our middleware was developed entirely by us and is owned exclusively by us. We worked with Malauzai to develop significant improvements and innovations through our partnership.”

Sidhu stated that even though they are investors in Malauzai, they are not restricting Malauzai’s ability to market any of their offerings to other community banks. Sidhu also mentioned that the onboarding process that includes joint account and line of credit opening is dependent on BankMobile middleware and not the Malauzai app.

BankMobile has been introduced with basic bank products to serve their intended customer segments. They intend to expand to a full suite of lending products like auto loans, credit cards and mortgages while also adding certificates of deposits.

The launching of a new mobile-only banking app comes at a time when consumers are looking for an improved mobile banking experience. Recent studies confirm that an online or web banking experience modified slightly for mobile is not adequate for today’s digital consumer.

Before opening my BankMobile account, I had spent several hours over several days testing most of the features of the app. I think the average millennial and tech-savvy consumer that the BankMobile team is looking to acquire will like the offering. In fact, I think they will love it. The design of the entire app developed by Adrenaline is very straightforward and avoids the unnecessary clutter common with traditional mobile applications. From the pages describing the BankMobile brand to the user interface, the product provides an exceptional user experience.

After downloading the app (both iOS and Android versions are available), I easily opened a checking account on my Android smartphone. The feature that made it super easy to open my account was the application’s ability to scan the front of my driver’s license and the barcode on the back. The account opening app, powered by Mitek, provided me feedback to improve the scan. It told me when I needed more light and when to move my license closer to the phone’s camera. 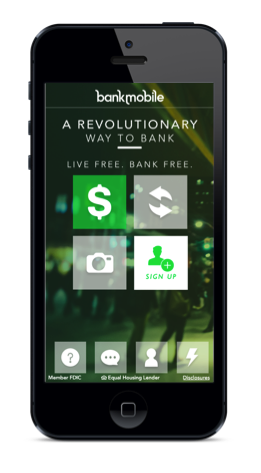 When I was done photographing my license, I answered a few Know Your Customer (KYC) questions, typed in my social security number, created my user ID and password and funded my account via a transfer from an existing bank account. All the requisite disclosures were presented and application review was provided. I’ve tested many online and mobile checking account opening applications and BankMobile’s is among the best, if not the best, I have used.

“This is just the beginning of our journey as a company.”
— Warren Taylor, BankMobile

My Chase mobile banking app and GoBanking mobile app allow me to check my account balances without logging into the app. The BankMobile app provides this capability as well, but does it in a very simple way. I open the app and I see my balance and up to 15 transactions. To do any other function in the app, the app asks me for my pin (after PIN access is already configured).

My other apps require me to swipe to see the balance (which is shown in a different part of the app from where balances are normally shown). In other words, the BankMobile app removes much of the friction from this basic task.

The BankMobile app also has PhotoBill pay and mobile check deposit (both powered by Mitek), person-to-person payments, and you can turn your debit card on and off. The majority of these features are not found in the majority of bank or credit union mobile apps.

The challenge for BankMobile will be to create an overall experience that is different than other offerings for their target markets. By focusing on ‘digital natives,’ the bar is being set by industries outside of financial services, requiring continuous enhancements and increased ease-of-use.

“This is just the beginning of our journey as a company,” added Warren Taylor from BankMobile. “We know that what we have here is groundbreaking, and we look forward to sharing updates with those who seek to become a part of the BankMobile family.” This focus on constant improvement is also important since other banks and credit unions are also starting to improve mobile banking capabilities.

BankMobile is a worthy bank account plus mobile app to add to your active arsenal of financial services applications. The slideshow below provides a visual overview of my smartphone first impressions.