New generations of young and technology-savvy Americans face a highly complex and uncertain economic environment with a degree of choice and consumer freedom never seen before. Financial institutions need to help Millennials not only to access credit but also to navigate the intricacy of their financial lifecycle. If banks and credit unions don't tackle these challenges, non-banks will.

Today, there are roughly 75 million consumers between the ages of 18 and 34 in the U.S. This represents one in four of those with a checking account. Defined as those reaching young adulthood around the year 2000, Millennials are known as the hyper-connected and technology-savvy crowds that interact on social media. For others, Millennials represent the middleclass protesters of the Occupy movement, the new generations of highly-indebted professionals, or the narcissists that made “selfie” the most famous word of 2013. Despite these labels, Millennials’ attitudes and preferences are touching upon many aspects of social and economic life with significant implications for the banking industry. 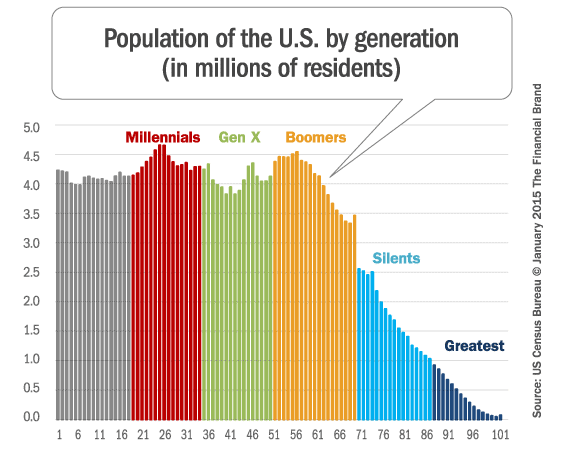 Millennials are the most educated generation in U.S. history, with more young adults holding higher degrees that at any point before. In 2013, one third of those ages 25-29 years old had at least four years of college or more, and the percentage skews higher for women (37%) vs. men (30%). In 1950, the share of individuals with four years of college or more was 7.7%, and by 1980, when the last baby boomers were starting college, the percentage was 22.5%. Today that number sits at 33.6%.

High levels of student debt limit the access and demand for other forms of credit, particularly for individuals who struggle to repay their student loans. Student lending was the only type of debt that increased in the aftermath of the Great Recession. And the proportion of 90+ days delinquent borrowers went from 7.9% in 2004 to 16.1% in 2012, for individuals 30 years old or less. 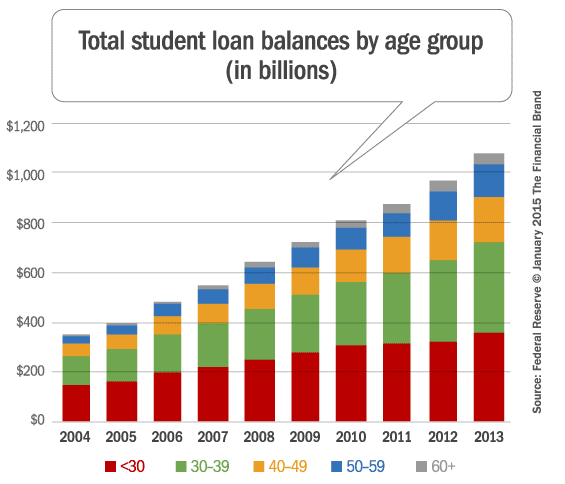 Millennials skepticism about political and religious institutions also extends to banks. Recent surveys indicate that half of Millennials consider their bank no different than other banks. In addition, Millennials expect innovation in banking to come from outside the industry, either from high-tech startups or well-established names like Google, Amazon, or Apple. Around 68% of Millennials believe that in five years from now, both the way they access their money and pay for goods and services will be completely different. Moreover, 33% believe that they will not need a bank at all.

The financial crisis that started in 2007 and the subsequent recession has had a lasting negative impact on banks’ reputation, illustrated by the fact that the four biggest bank brands are among the “least loved” by Millennials. This reputational crisis was leveraged by new disruptors, some who reside outside the scope of regulatory scrutiny. Peer-to-peer lending, crowdfunding, payment platforms and virtual currencies have proliferated in the aftermath of the recession in large part due to their value propositions based on technology, simplicity, transparency and anti-bank rhetoric.

Millennials demand companies to embrace transparency, simplicity, integrity and commitment to social and environmental causes. These values should be taken seriously in order to appeal to this segment of the population. Banks can use corporate social responsibility initiatives to attract Millennials, learning from industries that have successfully incorporated Millennial values such as fashion designers and restaurants.

Millennials rely on the internet, mobile technologies and social media, and almost 80% have a smartphone. This is critical for brands as positive feedback on blogs, Twitter, You Tube and Facebook can go viral in a matter of minutes, influencing the behavior of existing and potential customers with long-lasting effects.

In banking, more than 70% of Millennials have used mobile services within the last 12 months vs. only 40% for the remaining adult population. Around 94% of Millennials are active users of online banking.

Millennials’ strong dependency on connectivity and mobile devices can turn a positive opinion into a referral with the potential to reach hundreds or thousands of other Millennials. However, the opposite can also be true with disastrous consequences for an industry that is painfully rebuilding its reputation. Therefore, seeking Millennials’ feedback, listening carefully and responding promptly on a personalized basis, could attract them to banks at a relatively low cost.

Approximately 22% of Millennials between 18 and 29 years old are married, compared to 36% of Gen X when they were the same age. This proportion was even higher for Baby Boomers at 40% (50-68 years old) and Silents at 50% (69-86 years old). This means Millennials are also delaying household formation. As of March 2013, only 34% of them have formed a household. This share is even lower than the 35% observed in 20094, when the economy lost six million jobs. This phenomenon partly explains the slow recovery of the housing market, the drop in homeownership rates and the spike in the demand for rental and multifamily units.

Postponing marriage has a direct impact on banking as it lowers the demand for new and existing homes, apartments, furniture and home-related services that are financed through credit (mortgages, CRE loans, HELOCS and credit cards). Other products like insurance, auto loans, and college savings accounts are also impacted.

Millennials are a complex and diverse group with different needs and preferences. Consider as an example the contrast between the financial needs of a 34 year old individual with a family and a stable job versus those of a 20 year old individual still in college. The former may demand a mortgage while the latter may require a credit card to start building credit history. From a traditional banking perspective, the 30 year old Millennial may be a more profitable and stable customer. However, banks also need to devote resources to attract the younger Millennials if they want to maintain a stable customer base over time.

Contrary to their older peers, young Millennials are “technology natives”, meaning that they have never experienced a world without social media or smartphones and are not prone to do business inside a branch. Their relationship with a financial institution has to be built on tech tools from the very beginning. That’s why young Millennials are more likely to embrace neobanks, outside startups, and other challenger brands.