Most financial institutions make pricing decisions after watching what competitors are doing. That’s important, but insufficient for proper pricing because it ignores how consumers react to products and pricing during various economic conditions.

The governing principle of behavioral finance is that consumers make intuitive decisions during stressful economic times, as a result of high money anxiety, and shift to analytical decision-making mode when economic conditions improve. The implication of this principle is that financial institutions can price deposits differently during various levels of money anxiety. Here is a case in point illustrating the power of money anxiety over consumer financial behavior.

Empirical analysis in my book, Money Anxiety shows how consumers lost interest income on their bank deposits because they made an intuitive rather than analytical financial decision to shift deposits from term (certificate of deposits) to liquid accounts (checking, savings and money market) due to high money anxiety. From December 2007, when the Great Recession started, until December of 2013, consumers increased their liquid accounts balances by 89%, yielding only an average annual return of 0.62%, while decreasing their term accounts balances by 37%, yielding a yearly average of 1.39% during each of the past six years.

Making an analytical financial decision to leave $10,000 in an average-term certificate of deposit account would have yielded consumers $139 per year for each of the past six years compared to an actual return of only $62 resulting from an intuitive financial decision to shift the money to a liquid account.

The reason consumers shifted their bank deposits from term to liquid accounts is purely intuitive. Research presented in my book clearly demonstrates how consumers tend to hoard “Mattress Money” during times of high money anxiety. Mattress Money is a behavioral finance phenomenon where consumers feel a greater sense of security by perceiving that their money is more attainable to them in times of need – much like placing their money under a real mattress.

Similarly, during the same time period, December 2002 to December 2007, balances in liquid accounts, such as checking, savings and money market, increased by 40.3 percent, from $3.07 trillion to $4.31 trillion. This is also a normal growth rate for liquid accounts during times of economic and financial certainty. 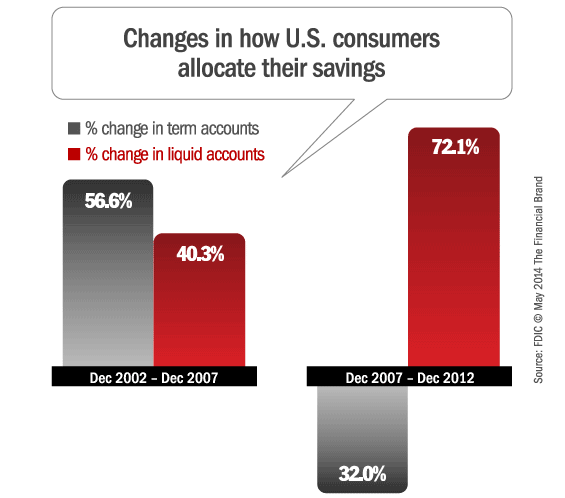 Conversely, during the second time period, from December 2007 to December 2012, there was a major shift in the financial orientation of people who shifted money from term accounts to liquid accounts. We can clearly see in the graph that during the second time period, covering the Great Recession, people withdrew 32.0 percent of the balances they had in term accounts, from $2.60 trillion down to $1.77 trillion, and moved it over to liquid accounts, which grew by a whopping 72.1 percent, from $4.31 trillion to $7.43 trillion.

We know for sure that the money withdrawn from term accounts went to liquid accounts because the total amount of money deposited in bank accounts during this time period increased from $8.42 trillion to $10.61 trillion; thus money did not leave the banks — it was just shifted to liquid accounts as an intuitive rather than an analytical decision.

Consumers modify their behavior relative to the economic conditions they are anticipating or currently facing. The change in consumers’ financial behavior is independent of their demographic or psychographic affiliation, which means that everyone is affected by money anxiety to some degree.

The reason consumer financial behavior is so important in pricing is because it allows banking executives to anticipate their consumers’ behavior during varying economic times. Thus, they can ensure that the types of products and services they provide are likely to be desirable and attractive to consumers under the prevailing economic conditions.

Understanding and incorporating consumer financial behavior into pricing decisions provides financial institutions with a competitive advantage. It allows banking executives to project future demand for products and services based on economic conditions, as well as establish a pricing strategy that leverages the principles of behavioral finance.

About the Money Anxiety Book 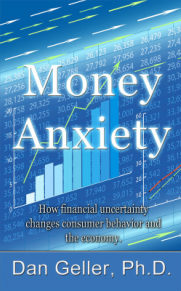 Dr. Dan Geller developed the Money Anxiety concept and index after observing how a combination of economic indicators and factors impacts consumers’ financial behavior. Specifically, he observed how financial anxiety impacts the saving and spending patterns of consumers, and the impact such changes in financial behavior have on the economy.

Dr. Dan Geller is an experienced researcher and analyst, and an expert in statistical modeling. He is also the author of the book Money Anxiety. He is frequently featured in national and financial publications, such as The Wall Street Journal, The New York Times, Bloomberg/Newsweek, and has appeared on CNBC, Fox News Radio, and numerous other media outlets.