Credit unions can prove their worth by sending members statements that summarize the savings they enjoy vs. banking at other financial institutions.

Credit unions have a big problem. According to Tony Rizzo, GM/Creative Director at MARQUIS, they actually have four big problems, and their names are BofA, Citi, Chase and Wells Fargo.

“How can you compete with banking goliaths like BofA when they are spending $325,000 on marketing every hour, every day, every week, every month?” Rizzo asks. “How do credit unions prove to people that they can save more money and make more money than with BofA or some other bank down the street?”

That’s where a “Member Value Statement” can help. Rizzo hopes this new concept that MARQUIS is pioneering will help credit unions communicate their value proposition to consumers. The Member Value Statement calculates specific dollar amounts for each members showing the relative value of their credit union’s products compared to similar products offered by nearby financial institutions.

“Price is the biggest advantage credit unions tend to have over their bank competitors,” Rizzo says. “Our mission with Member Value Statements was to figure out how to exploit the price advantage, then use it to reinforce consumers’ belief that credit unions offer a superior banking experience.”

The idea isn’t completely original, of course. CUNA, for instance, has long made comparative information and statistics available to its members, but only at a macroeconomic level — never comparing one credit union against a rival bank, and certainly not for each specific member.

“We wanted Member Value Statements to make personal, specific and relevant comparisons for people, rather than produce pithy stats that are good soundbites for a newsletter,” Rizzo explains. “We decided made ours so that it would show members all their relationships with their credit union — all of their deposit and loan products — then compare them with the top 15 or 20 banks in that credit union’s specific footprint.”

In essence, MARQUIS’ Member Value Statements are like sending a report card to members. One might say, “You opened an auto loan with us five years ago. You paid 3% APR, our best rate at the time. Had you gone to the top 20 banks in this market, you would have paid 5%. Here’s how much you saved by making the decision to bank with us.”

“We do that for each deposit and each loan, and then we summarize the total and tell the member, ‘Here’s the overall value,’” Rizzo says. “It clearly illustrates to the member why it’s better to bank with this particular credit union.”

“It reaffirms to the member that they made the right choice, that they’re with the right financial institution,” he adds, “but it also gets them thinking, What else could I do with my credit union? How else could I save or earn more with them?”

MARQUIS will include other credit unions in the comparisons if a client asks, but Rizzo says he usually recommends against it. “When I look at market share and penetration numbers across product categories, credit unions — while important — are not a significant force in most markets.” And besides, credit unions don’t usually turn on one another. 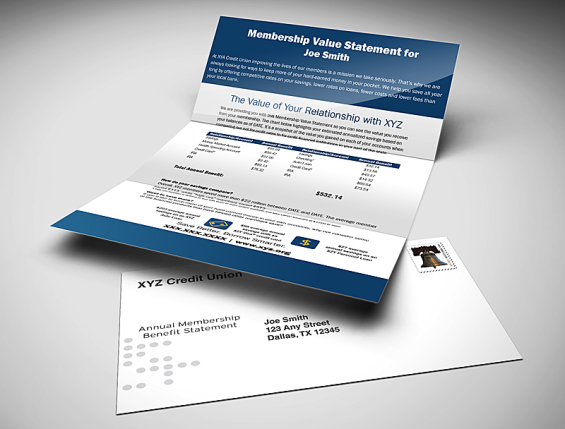 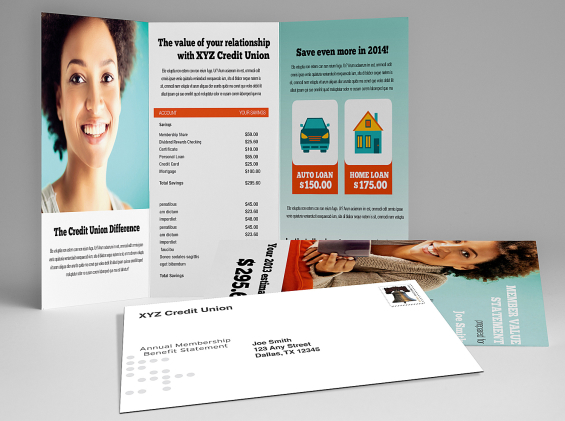 Understandably Rizzo won’t reveal exactly how MARQUIS calculates its Member Value Statements, but he will say that the average project — which encompasses all of a credit union client’s targeted members — requires between 200 to 250 hours for programming, analysis, testing, content creation and distribution. “Everything is extremely customized, none of it is templated — because everybody’s different,” says Rizzo.

How much would does it cost a credit union to tap MARQUIS for Member Value Statements? “All in, with data and postage and printing, you should figure about $1.5 per member, per project. Some credit unions will come in higher than that, and some will come in lower, but that’s the average.”

That cost covers a single mailing of the company’s Member Value Statements to the entire membership, as well as a tracking component. “We’ll track responses, profit generated, cross-sell rate, products that were sold and balances that were sold for the credit union. That’s all part of this, too.”

What specific returns can a credit union expect to see from its investment in Member Value Statement? Rizzo says he and his colleagues aim to accomplish two tasks with each project: reduce a credit union’s attrition rate, and boost its cross-sell success.

“Let’s say a member doesn’t have an auto loan, checking account or a mortgage at a particular credit union,” Rizzo explains. “When they get this statement, we try to cross-sell those three products. Later we look and see how many members took advantage of our offers during the tracking period.”

“For every credit union that has executed the program,” he says, “they have received a minimum of three times their investment back in terms of net profit.”

Since it was launched in late 2013, more than 20 credit unions have implemented MARQUIS Member Value Statements, including Smart Financial Credit Union in Texas and Wright-Patt Credit Union in Ohio.

Susan Chapman, VP Chief Marketing Officer at Smart Financial, can’t says she’s seen that kind of ROI on Member Value Statements quite yet, but she says the credit union likely use them again in the future.

“Although we’ve come a long way in the last few years with our products and services as a whole,” Champman says, “we still have a long way to go helping how much they can save with us instead of someone else.”