This is the first work from new agency Grey New York, who won the account in April from incumbent Bartle Bogle Hegarty, which handled Ally’s advertising since the brand’s inception in 2009.

Ally Bank has now had three different ad campaigns in three years, produced by two separate ad agencies. With that kind of track record, it’s difficult to deliver any kind of consistent message or build a cohesive brand.

Ally launched with a wildly popular ad campaign starring a dubious corporate shuckster who loved tormenting children. (Remember when he asked the little girls, “Do you want a pony?” Great stuff.) The cruel and unusual twists in Ally’s advertising debut helped frame them as a plain, simple, direct and straightforward banking alternative, all while distancing the new brand from its tainted GMAC past.

If Ally had stuck with Mr. Disclaimer, they might have been able to create a pop culture icon like Allstate has done with Mr. Mayhem, but in 2010,  Ally switched gears completely. The bank abandoned its “straightforward” message and shifted to a narcissistic “love” theme with customers bragging about their affections for Ally. The “love” campaign was awkward and obnoxious — perhaps deliberately so — but it wasn’t very plausible. Come on, does anyone really love their bank?

Which is it? Accept? Or don’t accept?

In Ally’s new 30-second TV spot, a man at an ATM is posed with a familiar question: “The ATM will charge you a fee of $3.00 for this transaction. Accept? Don’t Accept?”

Someone behind him looking over his shoulder says, “It’s what they do. Accept it.”

Then everyone around him piles on with pressure to give in:

Faced with this moral dilemma, how does the man respond? Does he stand for justice and stick his finger in the eye of greedy bankers everywhere by pressing “Don’t Accept?” Does he transform himself into the hero of the common man by thumbing authority in true counter-culture style? Nope. The lousy bum caves. After all that build up and anticipation he just accepts it!?! You so desperately want the ATM guy to tell the onslaught of mindless drones bullying him to conform where to stick it. You’re rooting for him: “Take a stand! Man up!” When he gives in, you feel empty and disappointed.

The spot does a good job priming the audience with an anti-bank revolutionary message. But instead of delivering a clear takeaway, the audience is left confused. “Wait, you’re telling me I should reject the concept of bank fees, but in reality I should just accept them? What is that all about?” Vague and ambiguous endings may be appropriate for David Lynch movies, but not ads. You just don’t beat around the bush; you don’t send mixed signals.

The ATM guy should have stuck it to “the man,” pressed “Don’t Accept,” hopped on his iPhone and opened an Ally account. Bam! Done. Problem solved.

Unlike Ally’s earlier commercials starring Mr. Disclaimer, this latest spot from Ally only gives a glancing reference to the benefits viewers might enjoy. Ally seems to suggest you won’t pay any ATM fees, but they don’t say so outright. All they offer you is the abstract promise of “no nonsense, just people sense.” At least with Mr. Disclaimer, the benefits were more obvious and concrete: no double-talk, no unnecessary or complex loopholes, no bait-and-switch gambits. And Ally’s old one-word slogan was both brilliant and refreshing: “Straightforward.”

The new commercial shares the jaded sense of humor found in all of Ally’s previous campaigns, only this time it feels a little darker, a little more bleak vs. the humorous and more lighthearted executions we’ve seen in the past.

Ultimately, Ally’s latest TV spot falls under the broad category of bank-bashing ads. Instead of really focusing on Ally’s core points of differentiation, the main message seems to be: “If you don’t like banks, consider switching to Ally.”

Indeed, that’s pretty much what Sanjay Gupta, Ally’s CMO, said. “The fundamental message we hope to convey to customers is that they don’t have to accept ‘nonsense’ from their bank,” Gupta explained in a statement. “They can choose a bank that offers something better.”

In the new campaign’s second commercial, Ally conducts a rather unusual and daring experiment. A man on the street hands a briefcase stuffed with $100,000 to perfect strangers, asking them to watch it for him. “Thank you so much,” the man says. “I’ll be right back.” He runs off.

The big surprise? No one takes a dime from the briefcase.

“How much in fees does your bank take to watch your money?” the announcer asks.

“If your bank takes more money than a stranger, you need an Ally.”

It’s a much better ad than the first, but it doesn’t tie back to the “nonsense/people sense” message very strongly. 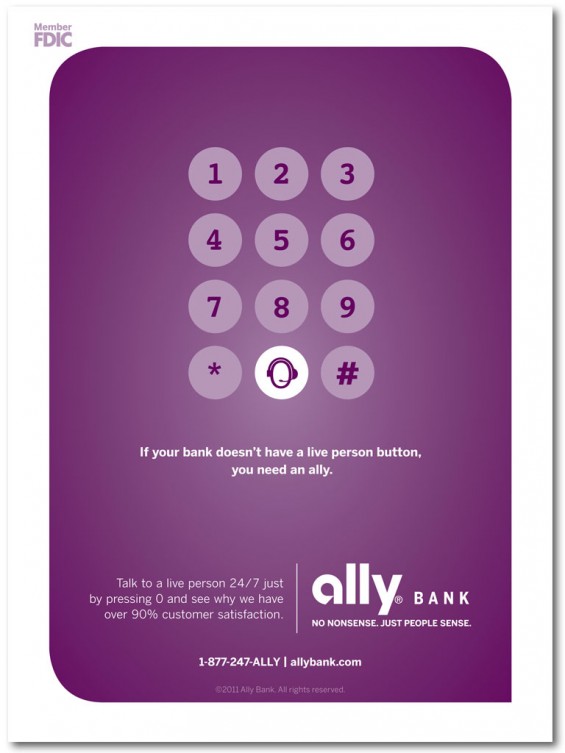