In an August 2011 survey of communications and public relations specialists at 35 global banks, MHP Communications found that the industry professionals are both unclear about its social media regulatory responsibilities and concerned about losing control when interacting on social platforms.

The study showed that “loss of control over the message and story” was a primary concern for more than half of all banking communications executives.

When asked about barriers banks face regarding further engagement in social media channels, 52% blamed regulatory issues, whereas 40% cited time and budget constraints as the main obstacles. 36% said social media does not naturally fit in their current organizational structure and would require additional resources to create and curate content. 12% said they do not know how to identify “real” customers within social media platforms so they cannot properly engage with them.

50% of banks said they are aware of regulatory requirements on social media in banking, but 27% said they are not sure what it looks like and how it affects them.

MHP Communications feels a major issue in such a heavily regulated industry like banking is that social media platforms are provided by external third parties. Any sensitive or confidential data will likely be stored on the social sites’ servers, something that unsettles banking compliance officers globally.

“Many banks feel that sensitive data should only be stored and transmitted on their own infrastructure to ensure full compliance,” noted the report’s author, Andrew Nicolls, Managing Director/MHP Communications.

What Is It Good For?

The most common use of social media among banking professionals is for following industry trends. 75% rely on social media as a good source for news and information in the financial sector.

For the majority of banks, social media is about building awareness with customers (63%). One in two banks use social media as part of their HR/recruiting efforts. 42% of respondents said they use social media for sales and marketing activities, while only 25% said it is used to resolve customer service issues.

15% said they do not use social media at all. 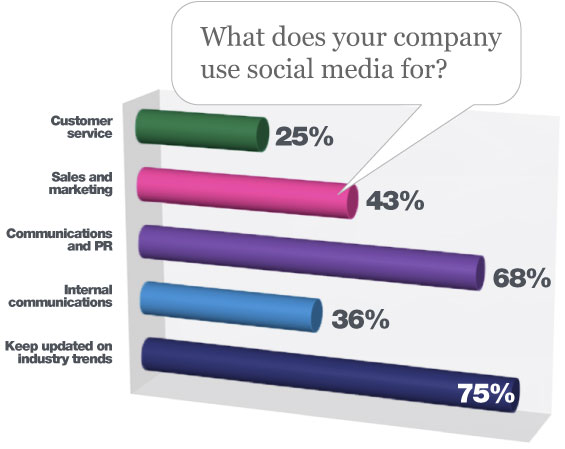 One third said social media serves as an internal communications tool, and one half use it to extend their external PR efforts.

MHP Communications points out that thousands of journalists are using Twitter and Facebook, both excellent channels where banks can engage in direct dialogue between their spokespeople and reporters. 48% of the participants in MHP’s survey said they use social media to engage with journalists and the media more easily.

When asked how they monitor online conversations, 39% of banks referenced Google Alerts, which is something MHP Communications characterized as “a surprisingly low figure.”

“Given the free and real-time nature of Google Alerts, this is one avenue that the banking sector should investigate as an easy method of monitoring online mentions,” said Nicolis.

27% use free tools such as Social Mention, RSS feed readers or Twitter’s search function. One in five banks either use paid-for tools such as Radian6 or have their own proprietary in-house technology. 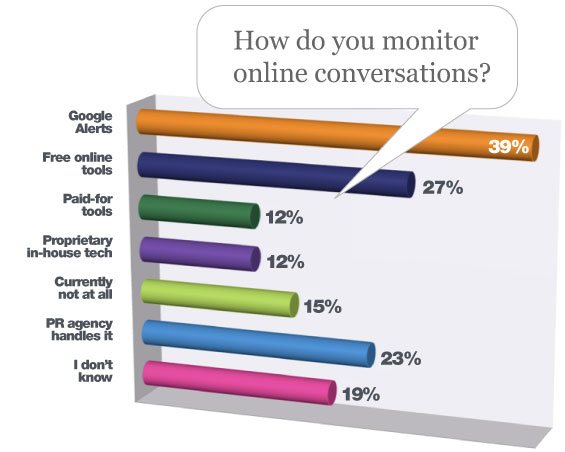 Strategy? Or No Strategy?

44% said they have some sort of social media strategy in place. 41% said they are in the process of creating one. 16% said they either don’t have a strategy, or aren’t thinking about one.

But just because a bank has a social media strategy doesn’t mean they have established specific objectives. Nearly one in three respondents said they have not defined any goals. 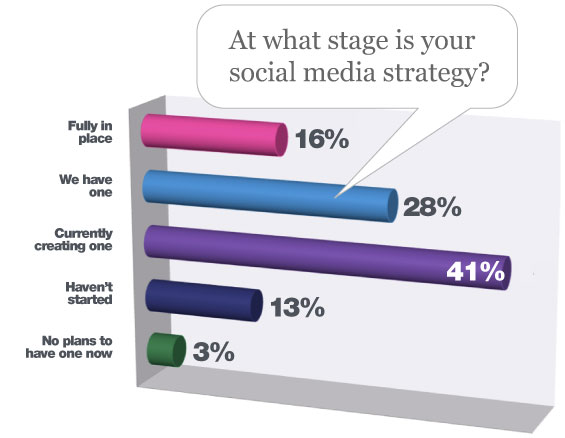 One quarter of the survey’s respondents noted that the impact of social media is limited.

“Banks and financial institutions are behind the curve when it comes to using social media as a communications tool,” observed Nicolis, the study’s author. “They are catching up, but there is still a high level of uncertainty regarding how to best utilize it.”

“The banking sector is more heavily regulated than many other industries, and orchestrating a strategic approach towards social media has been pushed back for a number of years.”