With all the attention heaped on mobile banking apps these days, it’s easy to minimize the importance of the web-based online banking experience. But according to a recent BankChoice Monitor survey, the people who use mobile apps most frequently are also frequent users of online banking.

Fifty-three percent of respondents said they use their current banks’ mobile app at least weekly, and more than 88% of these frequent mobile banking app users also indicated that they log into their bank’s online banking website at least weekly. 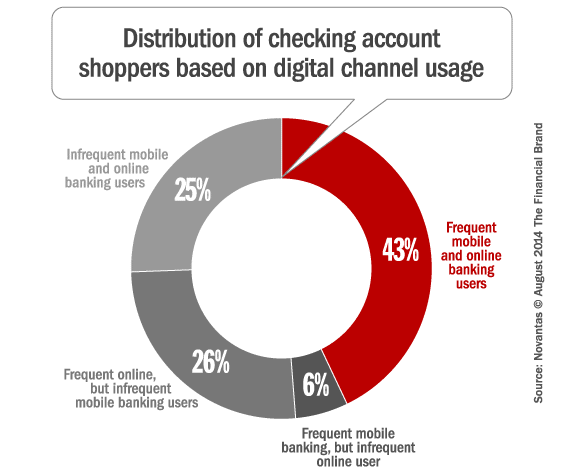 Categorizing users by how frequently they use digital channels can expose differences in profiles, preferences and behaviors.

2. Frequent Mobile Banking/Infrequent Online Banking Users. Only 6% of respondents fell into this group. Not surprisingly, 59% of this group is under 30 years old. Of all four groups, these respondents carry the lowest balances and are most interested in free access to ATM networks.

3. Frequent Online Banking/Infrequent Mobile Banking Users. More than one quarter of respondents use online banking more frequently than mobile banking. Fifty-six percent of these respondents are 50 or older. They carry higher balances than Groups 1 and 2 and are less interested in digital features like online billpay and email alerts.

4. Infrequent Mobile and Online Banking Users. Twenty-five percent of respondents all into this group. They have a more even age distribution than Groups 2 and 3. They maintain significantly higher balances than any of the other groups. They also use ATMs and overdraw their accounts less frequently.