Ten thousand people took Wells Fargo up on its latest promotion, Someday Stories. The promotion had people submit a 250-word story about how they’d use $100,000 to fulfill a dream. Five finalists have already won $10,000. One of them will win an additional $100,000:

Local news outlets covered the ceremony as each of these finalists were presented their $10,000 check from Wells Fargo — delivered by stagecoach, of course.

At the Someday Stories microsite, you can vote for your favorite person+cause, but registration is required. You can also invite a friend to vote, and there’s a link to the company’s Facebook page — two small features that, nonetheless, illustrate Wells Fargo online prowess. 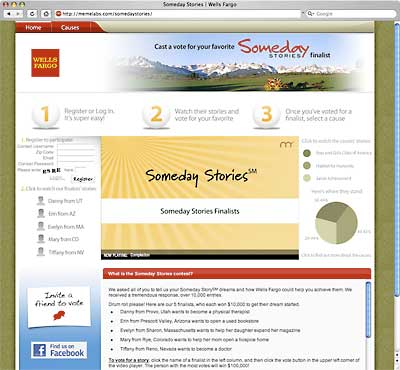 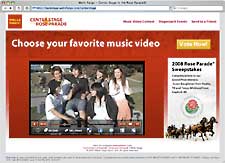 This is the second online contest Wells Fargo has done with its partners at Meme Labs. Last fall, the bank had a Center Stage in the Rose Parade video contest. Contestants were required to download a song provided by Wells Fargo, then sing along in their own homemade music video. People voted on their favorite videos, and the winning video aired during the 2008 Rose Bowl.

A bit surprisingly, Wells Fargo is comfortable having its custom URLs reroute to Meme Labs servers. In this latest promotion, wellsfargo.com/somedaystory redirects you to memelabs.com/somedaystories. It’s interesting, especially considering the bank can definitely afford its own servers.

Wells Fargo — that venerable financial institution that uses a 150-year old stagecoach for its logo — has become one of the world’s most savvy online marketers. As Visible Banking noted, Wells Fargo is the…

The funny thing is, you seldom hear about Wells Fargo’s online successes. For some strange reason, Wells Fargo isn’t often used as a shimmery example in presentations from Web 2.0 koolaid juicers. Maybe it’s because Wells Fargo does just about everything in-house, so there aren’t a dozen vendors trying to claim the fame? Maybe Wells Fargo has no real incentive to toot their own horn on the public speaking circuit? Or maybe this stuff works so well that they’d rather keep it to themselves? Who knows.