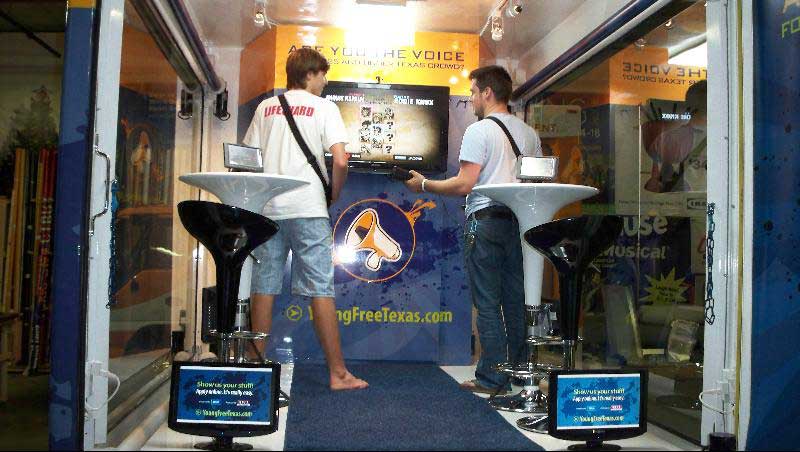 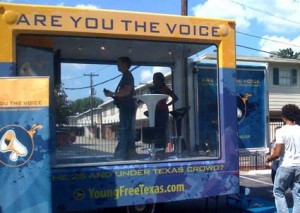 When Currency Marketing started planning the rollout of TDECU’s Young & Free Texas campaign, the agency’s media team was looking for non-traditional options to reach the 19 to 25 crowd. That’s when they found GoMobile Advertising based in Kent Washington.

The two firms hatched the idea pitting Guitar Hero players against one another in a truck that’s one-part cage-fighting arena, one part human fishtank.

GoMobile, which owns the truck, needed only 10 days to build and wrap the truck with artwork once the concept was approved.

Currency’s Tim McAlpine says the Texas truck from GoMobile is an 8 week campaign. The deal includes production, media, parking licenses, gas and a “brand ambassador” who works events and drives the truck around. 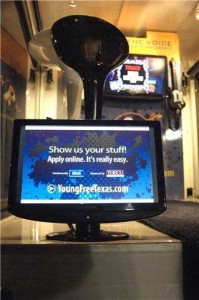 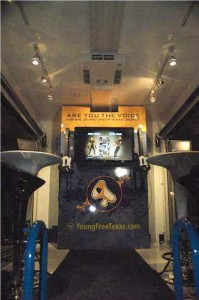 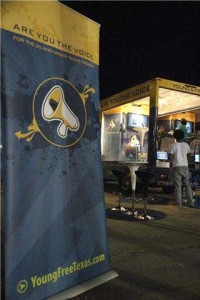 When on the road, the truck is a mobile billboard.

Such coolness doesn’t come cheap. When asked what
the GoMobile truck deal cost, Currency would only say
it was “tens of thousands.”

Because GoMobile owns the truck, the license plate is from Washington — unfortunate for a Texas-themed campaign.

The truck will be hitting hot spots in Houston until voting for the spokesperson is over in mid October.

Next week, another vehicle will become active in Alberta for the new Y&F Alberta spokester search.

Key Question: How seriously do you take your event marketing?

Key Takeaways: You need to be making “marketing events” to maximize your event marketing opportunities. Free pens and water bottles don’t cut it. While you don’t need something as expensive as a custom truck, what you do need is an idea of a similar magnitude. “Cutting through the clutter” is just as tough in real life as it is in advertising.