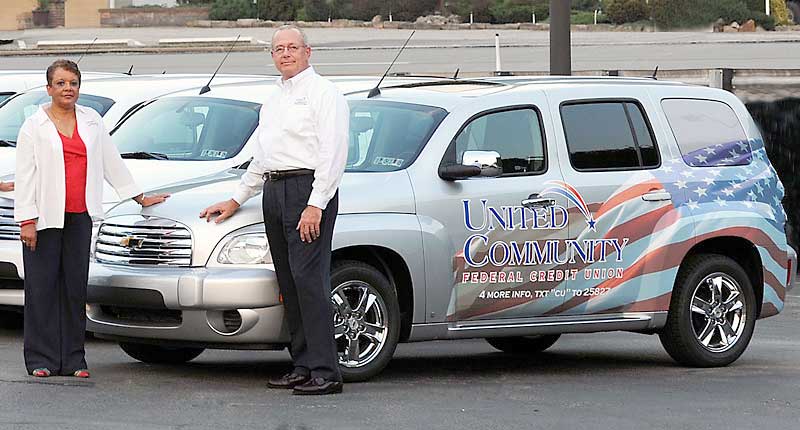 United Community FCU just gave brand new 2009 Chevrolet HHRs to 17 employees. The cars, wrapped from bumper to bumper with credit union graphics, cost $380,000. To pay for the campaign, the credit union is slashing its marketing budget in half.

Each employee is required to drive their new car at least 10,000 miles a year for the next three years.

Employees are given incentives to win gas cards by providing contact information of prospective members who ask about the credit union.

After hearing about the free cars for employees. one potential member said she was planning to switch her account to the credit union from another institution because she wanted to “deal with someone who treats their employees so well.”

On the back of each car is a number that cell phone users can text to receive the credit union’s phone number and address. “We’ve had 13 messages since Thursday,” Pastirik said.

The credit union leased the cars for three years. Sixteen of the cars are white, and one is silver.

In an interview with CUNA News, Pastirik said United Community’s board was 100 percent behind the concept.

United Community’s CFO was the brainchild behind the credit union’s car giveaway, which goes to show you that marketing ideas don’t always come from just the marketing department.

United Community Federal, in Pittsburgh, PA, has 8,000 members and $36 million in assets.