NAB continues to stir things up in the Aussie banking world. Following hot on the heels of its last viral success, NAB in latest marketing push centers around a fresh onslaught of clever and creative guerrilla stunts. The bank has done everything from duct-tape one of its employees to a light pole to giving away an ATM installed in someone’s home as a contest’s grand prize. home. This wild style of  marketing yields an impressive volume of PR and “social buzz.”

In its first barrage of guerilla marketing ploys, NAB filmed a series of psychological experiments — dropping “lost wallets” around for people to find, giving people incorrect change and letting money slip from paid actors’ pockets — to see how folks would react. Indeed the vast majority of Aussies did the right thing in each experiment.

NAB frames The Honesty Experiment in the context of its credit card offering: “Australians are an honest lot,” NAB says. “They deserve credit cards to match.” 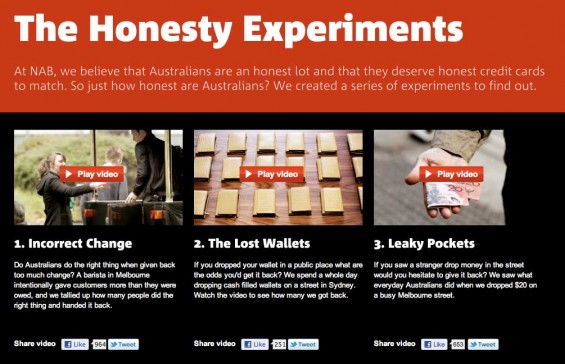 NAB – LOST WALLETS
12% couldn’t resist the temptation of a wallet stuffed with cash. They kept it.
The other 88% gave the fat wallets back.

Leaky Pockets
Would people do the right thing if they saw a stranger drop money in the street? NAB hired an actor to drop $20 dollar notes on a city footpath, then filmed people’s responses. 95% of the time, people went out of their way to give the money back.

Stunt #2 – Win an ATM Installed in Your Home 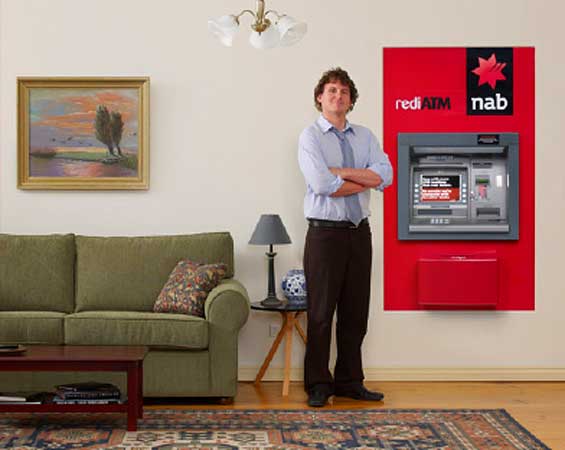 “In the spirit of ultimate convenience, and making our ATM network one of the most accessible in the country,” an NAB promotional site says, “We thought, hey why not see if someone wants an ATM in their loungeroom?”

That’s right. NAB has a contest that gives one lucky winner an ATM installed in their home. The winner will also receive an account loaded with $1,000, an iPad 2 and an iPhone 4, “so you can bank from your couch anytime,” as the bank puts it.

There’s one hitch. The winner must be willing to allow their in-home ATM exploits be broadcast over the internet. 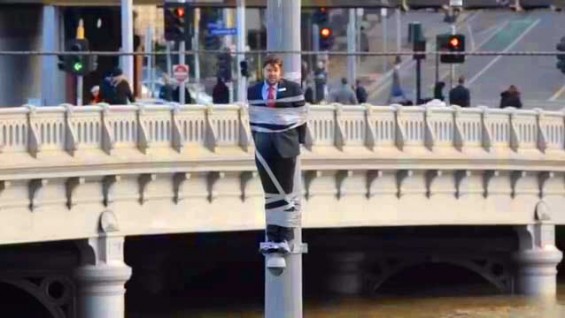 Australia’s big banks retaliate against the NAB’s growing popularity by kidnapping “Doug G,” one of the NAB’s employees, then wrapping him in duct tape to a light pole in downtown Melbourne. NAB is, of course, behind the prank.

Doug makes the most of his situation, talking to passersby about the advantages of NAB. “We’ve had so many good things happen this past year…Australia’s number one everyday bank, that the other banks — it’s just plain jealousy,” Doug explains.

“We kept lending to business, when other banks didn’t,” adds Doug.

All in all, the “light pole” gag is a lighthearted, playful, creative and fairly inexpensive idea to execute. Stunts like these can generate fantastic PR opportunities.