Subscribe Now Get The Financial Brand's FREE Email Newsletter
The Financial Brand looked at the marketing budgets for the 100 biggest credit unions in the U.S., revealing a number of insights that will surprise anyone in the banking industry.

Note: All data based on NCUA 5300 call reports.

1.) Credit unions spend more on marketing than you think.

Credit unions were once seen as a quaint, sleepy little corner of the financial industry. Not anymore. The top 10 credit unions invest $155 million annually on marketing, and the top 100 credit unions spend a combined $400 million on advertising and related educational expenses. Not many years ago, there weren’t many marketing vendors specifically targeting credit unions. It’s not hard to see why the credit union marketing business is no longer seen as a “cottage industry.” There’s some serious money at stake here. The Financial Brand estimates that the amount America’s 7,000+ credit unions invest in marketing annually flirts around the $1 billion mark. Still, that’s small potatoes compared to the estimated $2 billion BofA alone spends on marketing every year.

2.) Some very large credit unions spend almost nothing on marketing.

Similarly, Connecticut State Employees Credit Union ($1.6 billion in assets, 70,000 members) invested a paltry $14,697 on marketing last year. They eked out 2.50% asset growth, but an impressive 12.94% increase in loans. Unfortunately they lost 1,146 members along the way.

Normally, a credit union with $2 billion in assets would have a marketing budget around $2 million dollars. But there are a number of credit unions in the neighborhood of $2 billion spending over $4 million on marketing — more than twice as much as would be expected.

Among these aggressive credit unions, the average marketing cost per net new member is substantially higher than average: over $1,000 vs. $281.

4.) Some credit unions are spending thousands of dollars for every new member.

In The Financial Brand’s study, there was no stronger correlation between two variables than “Membership Growth” and “Average Marketing Dollars Allocated Per Member.” Those that invested less than $10 per member saw net negative membership growth of -3.90%. But those credit unions allocating slightly more than $15 per member enjoyed membership growth hovering around +15%.

Look at the chart below and you’ll see that most credit unions budgeting $15 or more to marketing per member saw member growth exceed +5%. 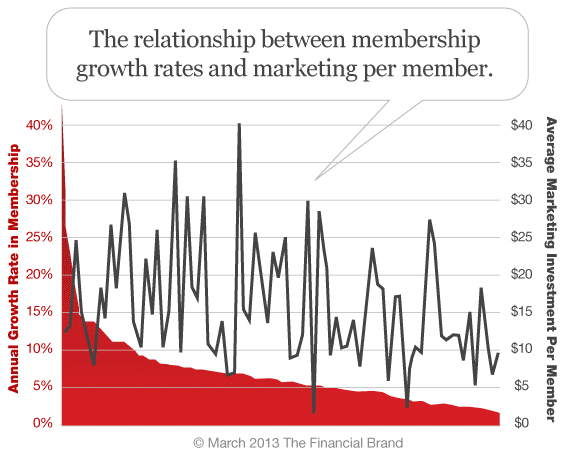 What Are Your Questions About Credit Union Marketing Budgets

The Financial Brand is happy to answer your questions. We have a lot of data, so tell us what you want to know. Leave a comment below, and we’ll try our best to dig through the research and find an answer for you.